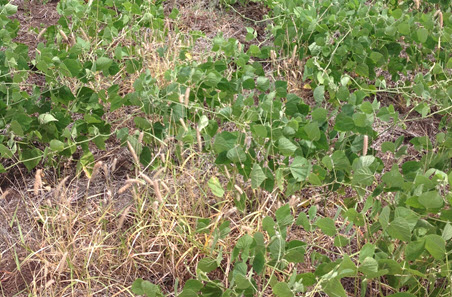 The following trials are either underway or have been completed as part of MLA’s effort to identify the cause of pasture dieback and develop effective management measures.

1. Field trials: Six large-scale field trials have been established on dieback-affected commercial properties in southern and central Queensland between January and March 2018 to test the effectiveness of a range of interventions against pasture dieback.

Some of the six field trials also included fungicides, insecticides, biological soil stimulants and biological control agents, including biological insecticide and silicon. These trials are ongoing and assessed regularly.

Each producer was interviewed, to collect information about how dieback was occurring on each property, and any observations by producers on potential causes and control practices which had been trialled.

The information collected from this initial survey formed the basis for the field trials described above, and informed further work aimed at identifying the cause of dieback.

3. Trials to determine whether soil-borne fungi are the primary cause of dieback: Strains of fungal pathogens which were collected from affected properties and could potentially be the cause of pasture dieback are being tested in three separate trials in Queensland and NSW.

The coordinated trials are being run under controlled conditions in temperature-controlled glasshouses at Hortus (Bundaberg, Queensland), NSW Departments of Primary Industries (Ourimbah, NSW) and University of Sydney (Cobbity, NSW).

The trials are evaluating two strains each of Rhizoctonia, Fusarium, Bipolaris and Nigrospora, plus combinations of these and other strains.

4. Glasshouse trials at University of Sydney: These trials use soil collected from a severely affected dieback area in Biloela, Queensland.

The soil was potted up in a glasshouse and some buffel grass seed germinated. These plants showed some symptoms of dieback but are still growing well.

Fresh buffel seed was then planted in the affected soil and these plants grew normally, with no sign of dieback.

This trial is being maintained as a model for testing potential dieback controls measures.

5. SARDI Predicta DNA testing: Soil samples were collected from three properties in Queensland from affected and unaffected areas. Samples were sent to SARDI in South Australia who are able to measure the levels soil borne fungal pathogens and nematodes in the samples using molecular techniques. This testing is designed for grain crops and vegetables (not specifically pastures); however, all of the suspected pathogens were covered by using two of the SARDI testing panels – the Crop Research panel plus the Hort Research panel.

The results have only just been received, and have identified two new potential pathogens which will be further investigated.

6. Mealy bug studies: Mealy bugs have been widely detected on pasture grasses showing symptoms of pasture dieback. The mealy bug has been identified as Heliococcus summervillei and is the only known species from this genus known to occur in Australia.

This approach is likely to assist in the determination of a definitive cause of pasture dieback, and also with the development of effective management techniques.

The team will be collecting 50 soil and plant samples from dieback-affected areas and identifying the fungi, bacteria, nematodes, virus and other organisms present and looking for correlation between the pasture grass dieback and organisms which might be a factor in the disease.

If they are successful, the tool will help researchers to better understand how the disease has developed across Queensland and how that spread related to weather patterns and other factors. It will help identify new outbreaks, and could potentially predict outbreaks before they occur.

If you have pasture grass dieback on your property, please contact the MLA pasture dieback research team: pasturedieback@mla.com.au