Beef a victim if Canada sidelined in NAFTA

Update: This article was prepared in the lead up to the deadline imposed on Canada to decide their involvement in a new deal, and based on widespread speculation that Canada would not be a part of a new deal. However, the United States, Canada and Mexico came to a last-minute in-principle agreement on a revised North American Free Trade Agreement (NAFTA) on Sunday evening (30 September 2018), to be formally known as the United States-Mexico-Canada Agreement (USMCA). Under the new trade agreement, the beef supply between the respective nations would remain uninterrupted. However, the amended agreement still requires US congressional approval, and mid-term Senate elections (and a possible Democrat upset) could remain a final hurdle.

The North American Free Trade Agreement (NAFTA) – which includes the US, Mexico and Canada, and was recognised as the gold standard for multilateral FTAs when it came into effect in 1994 – has underpinned increased trade across the continent and led to the integration of cross-border supply chains. The North American beef industry has been transformed by free trade, with beef trade between the three countries reaching near-record levels in 2017, representing more than double the volume traded before NAFTA came into force. However, now the deal looks in jeopardy. Mexico and the US have negotiated a revised agreement – and Canada is yet to accept.

What will be the implications on the beef trade if a future deal excludes Canada? How may this impact Australia’s position in key beef markets?

Over the last decade, around two million cattle per annum have been trucked from Canada and Mexico into US feedlots and abattoirs, representing about 8% of the US steer and heifer slaughter, while boxed beef has been regularly traded in both directions across both borders. In fact, a steer may be raised in Canada, fed and slaughtered in the US with Mexican labour, and consumed across all three markets.

However, the US has been a net importer (on a volume basis) of North American beef for the last six years (the US has maintained a beef deficit with Canada since 1992, however, over the last three years one has also developed with Mexico). 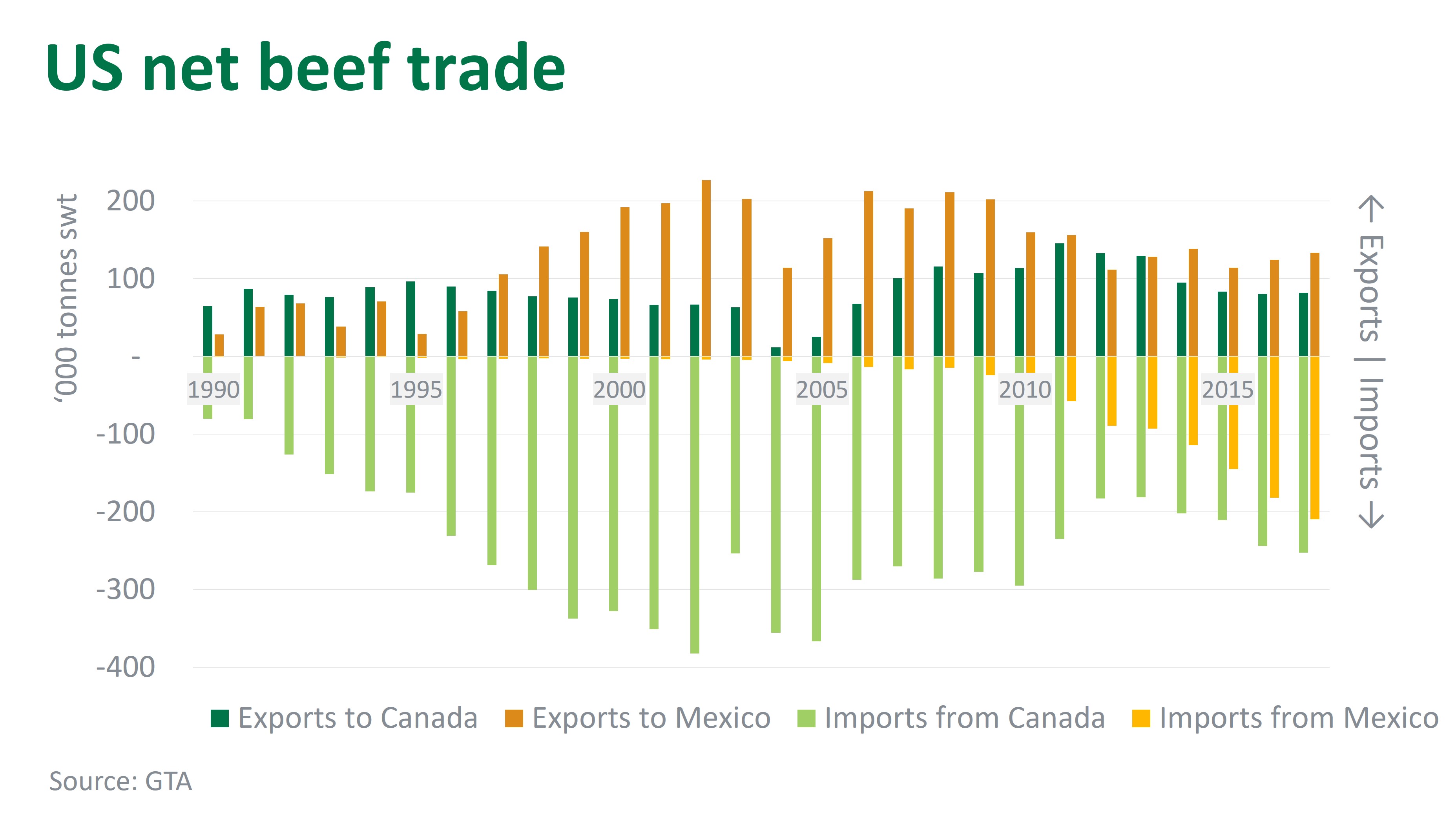 While the US-Mexico trade relationships appears shored up, the biggest risk is Canada being sidelined in an agreement. If that were to occur, it would leave close to one million cattle (or about 330,000 tonnes carcase weight equivalent) and almost 130,000 tonnes swt of boxed net trade from Canada to the US (10-year average volumes) defaulting to WTO Most Favoured Nation access (average applied beef tariffs would be 17.8% and reach as high as 26.4% on some product lines). However, any changes to access will not occur straight away, as withdrawal from the current agreement requires any party to give at least six-months notice in writing.

Given the beef supply in the US is expanding towards record levels, and the trade pales in comparison to local US production, the impact of Canadian beef becoming more costly or leaving the system altogether may not be felt by the US consumer. However, the impact would be felt by the Canadian beef industry, which relies on the US and Mexico for over 80% of its exports, and supply chains integrated across borders.

One outcome from a withdrawal from NAFTA may be some Canadian product shifting to North Asia. In the year ending June, Canada exported 21,800 tonnes swt to Japan, up 27% year-on-year and the highest levels since BSE, while shipments to Hong Kong were steady, at 21,700 tonnes swt. However, Canadian exports to China, at 6,400 tonnes swt, remain modest, as do shipments to Korea (3,700 tonnes swt) and Taiwan (3,500 tonnes swt). 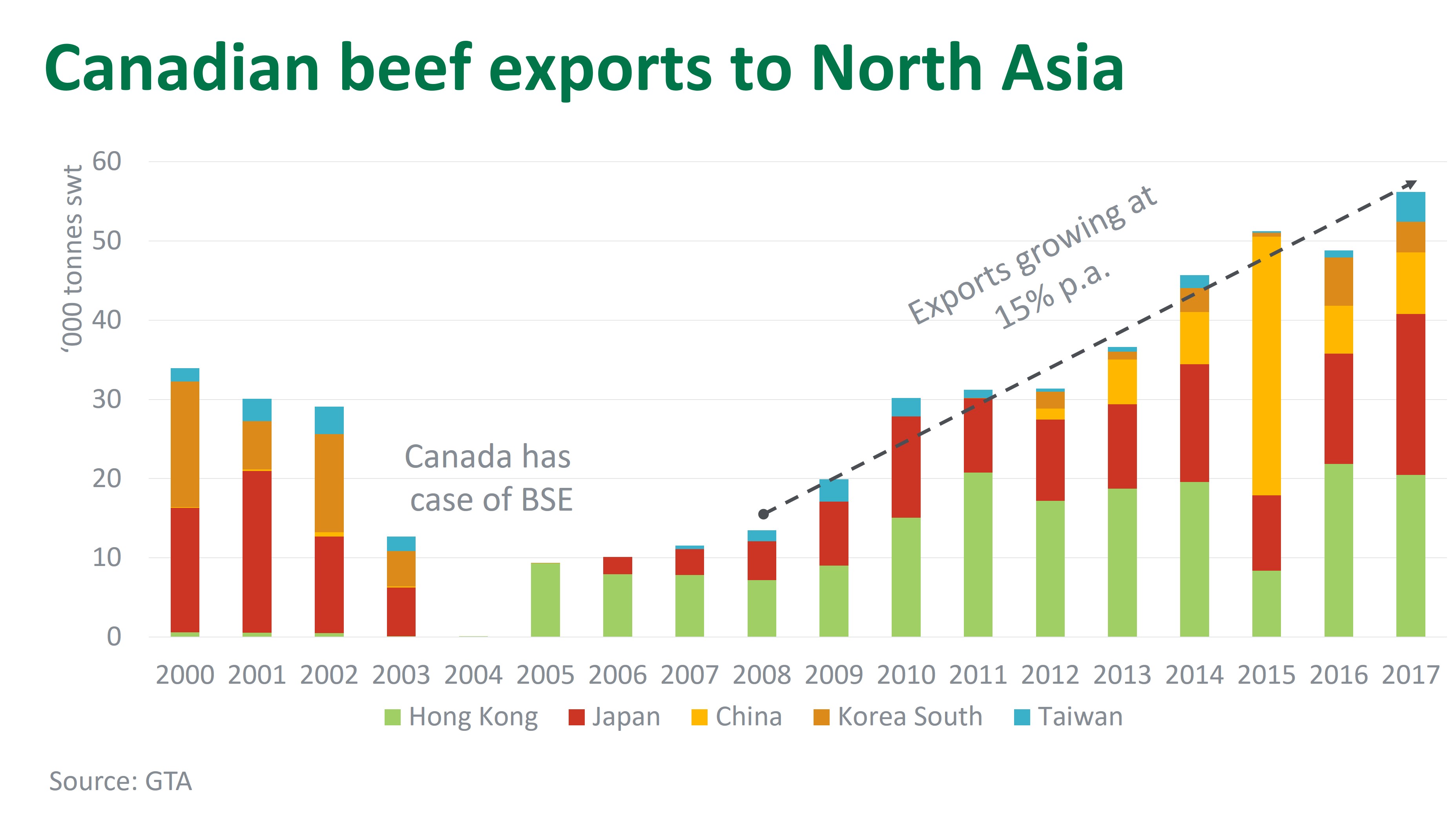 If Canada is excluded from NAFTA, will its beef do the same?

Australia, Canada and the US can all produce high-quality grainfed beef, sought after in global markets, particularly North Asia. While Canada is not expected to export significant volumes, it is able to compete in premium markets where Australia operates. In addition, some cuts it has been exporting to the US – namely, chuck, brisket and loin cuts – are well suited to North Asian cuisine.

However, a lack of preferential access will restrict growth in key markets. In Japan, Canada competes with the US and New Zealand within the quarterly chilled and frozen non-EPA safeguards – the frozen safeguard was triggered last year, causing tariffs to temporarily snapback to 50%, and has remained highly subscribed since. Pending ratification from remembers, Canada, along with Australia, will have improved access to Japan under CPTPP (beef tariffs of 38.5% will reduce to 9% over 15 years, and an annual global safeguard will increase incrementally from 590,000 tonnes swt). Meanwhile, the supply of HGP-free fed cattle in Canada will dictate future growth in exports to China and the EU.

If Canada was to be excluded from a US-Mexico trade pact and access, particularly to the US, was to default to WTO Most Favour Nation tariff schedules, some of the 130,000 tonne swt net beef trade to the US could be redistributed. Most likely, some trade to the US would continue but take a hit on tariffs; some may be pushed back onto the domestic Canadian market; while some may find its way to North Asia and compete with the likes of Australia.

So what are the options for Canada?

The artificial deadline of 30 September 2018 has been set for Canada to join NAFTA 2.0 (with the US-Mexico agreement being the template), fitting in with political cycles in the US and Mexico (a new Mexican President takes office 1 December 2018). With some intractable issues on dairy supply management, a chapter on investor dispute settlement mechanisms and protected cultural issues, it appears unlikely that this deadline for Canada will be met.

Hence, Canada is presented with four options to proceed:

However, it is still unknown whether the US Congress will approve a US-Mexico FTA without Canada, and if the current Administration has the power to put forward the bilateral FTA given its original mandate from Congress was to re-negotiate NAFTA (with all three countries included). Whatever the outcome, for the status quo to remain will take some swift manoeuvring, significant concessions by Canada, and some creative thinking by US Congress. Get out your crystal balls, as we are entering unchartered territory.