The Eastern Young Cattle Indicator (EYCI) hit a new record of 1,057c/kg cwt on 6 October, up 23c on week-ago levels. The seven-day throughput declined 34% in a week to achieve 8,380 head, the lowest amount since June this year. Continued rainfall and less sales going ahead due to the public holiday have dented supply, contributing to the EYCI continuing to break new ground. There is more rain predicted across much of the eastern states for the next week, and sweeping into central Australia, according to the Bureau of Meteorology. This could add further pressure to cattle prices in the coming period if the outlook comes to fruition.

Total weekly cattle slaughter has continued its consistent run around the 100,000 head/week mark, just shy at 96,928 head for the week ending 1 October. Slaughter volumes continue to trend much lower but in a similar fashion to 2019 levels. With the long weekend impacting some processing plants this week, the following total is expected to be lower again, rounding out the seasonal lull period.

Grown steers also jumped 6c/kg cwt, continuing to produce record movements for grid prices. Cows in NSW also lifted 3c/kg cwt, with most other categories firm on the week prior. Tasmania saw the largest uptick of 31c/kg cwt for MSA cattle and yearlings, and 21c/kg cwt for cows.

September beef exports improved 3.5% from August levels to achieve 79,843 tonnes. In better signs for beef exporters, the higher lift in volumes came from Japan, China, South Korea and the US. 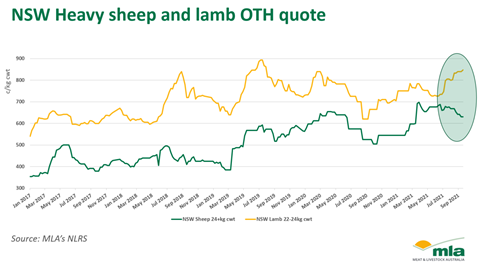 Lamb and mutton OTH prices have spread since July as the spring flush continues to build. The spread is particularly evident this year, with mutton struggling to keep pace with quality lambs coming online. The current margin between heavy lamb and mutton in NSW is 218c/kg cwt. Saleyard mutton indicators have also continued to fall, with lamb holding up quite well.