Cattle exports have regained the impetus this year, even in the face of challenging trading conditions, increasing 24% year-on-year in the first nine months of 2018 to 780,000 head.

Exports out of Darwin for the calendar year-to-September lifted 29% year-on-year, as a reasonable northern wet season boosted supplies and relieved some pressure on export prices through the first half of 2018. If the trade can hold current momentum, it will likely finish the year close to one million head, a stark contrast to the 867,000 recorded in 2017.

However, export feeder steers out of Darwin currently sit at 310¢/kg live weight, marking a move above 300¢/kg for the first time since March – a level often considered a benchmark of affordably for the Indonesian market, but made worse by a weakened Indonesian Rupiah. The increase in export prices could indicate northern cattle supplies are beginning to tighten and reflect overflow competition from east coast buyers amid some recent rain.

The Indonesian Bureau of Logistics is in the process of renegotiating new contracts to bring in between 20,000–30,000 tonnes of Indian buffalo meat (IBM) before December. As part of ongoing government efforts to stabilise prices in Indonesia, the latest contracts will aim to retail IBM at IDR80,000/kg. Current wet market prices for IBM in the Greater Jakarta area range from IDR80,000–100,000/kg, while fresh beef trades at a premium from IDR105,000-115,000/kg.

Year-to-September Australian cattle shipments to Indonesia lifted 5%, to 421,000 head, supported by increased availability and reduced prices. Feeder cattle exports have supported the lift, while breeder cattle exports for the year-to-September have totalled just 5,800 head, back 42% year-on-year and well below the rate to meet the 5:1 feeder-breeder policy target. A government audit (due December 2018) is scheduled to evaluate the implementation of the 5:1 policy, while the Ministry of Agriculture is also considering alternative programs and working towards meeting its 2018 imported breeder target of 6,000 head. 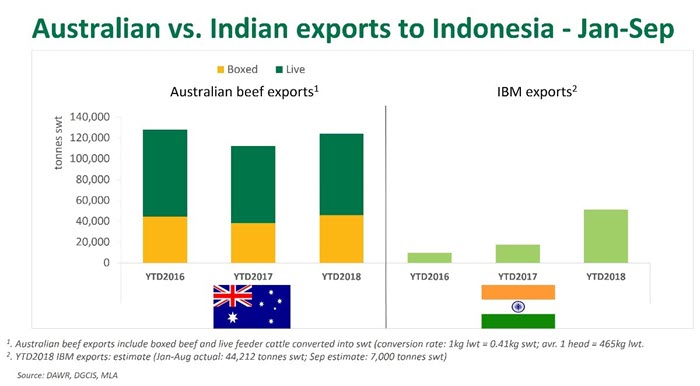 Exports of feeder and slaughter cattle to Vietnam for the calendar year-to-September totalled 139,000 head, up 9% year-on-year. Shipments to Vietnam have been stable throughout the calendar year. However, there was a drop off in exports during September, as the tight supply of heavy cattle in market - as domestic processor and lot feeders compete for a limited pool of heavier cattle – contributed to a reduction in slaughter cattle exports. In market, reports suggest cattle supplies in Vietnam are sufficient at present and importers are happy to hold off until trading conditions improve.

Opportunistic buying resulted in a lift in exports to Malaysia and the Philippines for the calendar year-to-September, as importers took advantage of lower cattle prices throughout the winter months – albeit volumes increased off a low base the year prior.