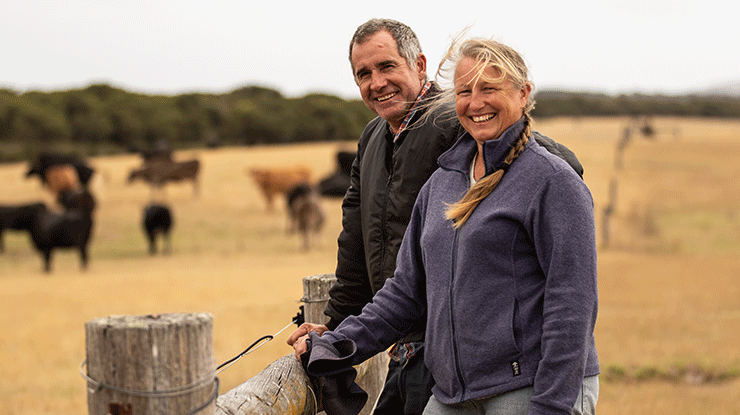 WA sheep and cattle producer Erica Ayers knows better than most the devastation a foot and mouth disease (FMD) outbreak could wreak on Australia’s livestock industries – and she said it’s just one disease producers need to be on the lookout for.

Erica was working as a vet in the UK during the 2001 FMD outbreak, which forced the slaughter of more than six million sheep, cattle and pigs, and cost the country more than eight billion pounds (approximately $A19 billion).

“Being the vet on the ground in charge of total flock and herd slaughter on infected farms is a memory that will stay with me forever,” Erica said.

For the past two years Erica has been part of the FMD Ready Project’s Sheep Innovation Pilot Group which was formed in conjunction with the Esperance‑based ASHEEP producer group.

As a member of ASHEEP’s animal health and biosecurity subcommittee, and with her firsthand knowledge of FMD, Erica could see the merits of the project.

“As a group, we could see the partnerships and strategies that would help in an FMD outbreak would be directly transferable to other diseases, whether endemic or exotic.

“FMD is a good example of how surveillance failure can have catastrophic consequences, but there are many other diseases producers need to look out for as well.”

Based on her experience in the UK, Erica said potential impacts of an FMD outbreak for Australian producers and their communities could include:

Erica believes the greatest FMD risk factor in Australia is complacency around international travellers, particularly those bringing in food.

The Sheep Innovation Pilot Group developed resources to address this risk, including an overseas worker induction flyer alerting employers of the disease risks and biosecurity signs aimed at travellers coming into Esperance.

The group also developed resources for producers, such as a livestock disease surveillance tool, a flyer to educate small‑scale landholders about disease management, and a pilot WhatsApp group, in conjunction with a local vet practice, to share livestock disease and health alerts.