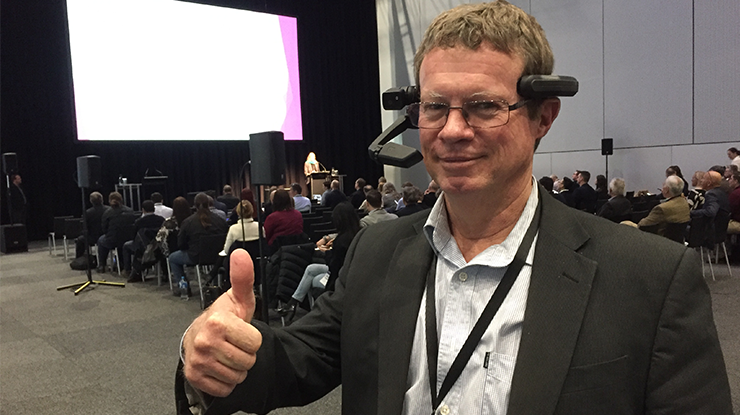 From wearable computers delivering veterinary expertise on remote properties to holograms of tractors allowing for spot-on space measurements in machinery sheds, the potential of augmented and virtual reality (VR) to transform agricultural production is enormous.

That was made very clear at a new event hosted by MLA in collaboration with all 15 Australian Rural Research and Development Corporations (RDCs) in Melbourne this month.

The Australian Ag Immersive Technology Conference 2019, a two-day conference, trade show and think tank, was a smorgasbord of emerging concepts, products and technologies being employed to massive advantage across a plethora of industries.

In the education and training sector, children are being taught financial literacy by immersion in a fun-filled virtual world and headsets with cameras and computers are halting the ‘silver tsunami’ of know-how exiting an industry when skilled, experienced workers retire.

In the engineering game, reviewing major projects in VR is enabling perspectives impossible to achieve in a standard plan.

In the military, 3D visualisation is capturing the potential of fast-growing data collection to an extent never before seen.

The opportunities for applications of all of these technologies, and many more, in the agriculture space are endless, according to the presentations and discussions at the conference.

Building a digital twin of a farm, voice-activated computers contained in a headset allowing machine repairers or agronomists to access experts anywhere in the world in real-time and virtual fencing smoothing the hazards of tourism encroaching on cattle country – these are just a small taste of what’s possible.

One dominant theme to emerge from the enormous volume of ag-tech food-for-thought, was the way mixed reality technology could assist industries such as red meat to better tell their story.

The ability to link the consumer to the farm and to validate production claims will be an enormously powerful tool in the future, red meat industry representatives at the conference agreed.

MLA General Manager Research, Development and Innovation, Sean Starling, said that point was certainly cemented by the technology, the solution providers and the end users at the event.

“It’s really important for all of Australia’s RDCs to look a long way into the future as well as looking at today and this event was about trying to understand what emerging technologies are coming from other industries that our industry might be able to leverage,” Sean said.

“Although in some ways these technologies have a long way to develop and evolve, there are some immediate applications here today – telling the whole-of-supply chain story, building trust and engaging consumers in order for them to value what we do is a key one.”

Sean said immersive technology is one of those great areas where it doesn’t matter if you’re a wool grower, grain farmer or meat producer, it’s applicable. Likewise, it’s relevant to producers, processors and retailers equally.

“What we were aiming for with this event was firstly to say to solution providers, don’t forget about agriculture – we have a large sector on offer that’s hungry for this information.

“Then from the industry side, we need progressive people to engage with these solution providers, to open up their business doors and evaluate their offerings.”

Linking up technology and service providers

Sean said as a service provider, MLA doesn’t want to be in the middle of these conversations but rather link them up and then be the support mechanism when the industry comes back with ideas for R&D in this space that will further its ability to leverage the technology.

At least half the solution providers at the conference have a current pilot project underway in partnership with MLA, or are about to kick one off in the next few months.

Sean said the hope was that in two years, the second immersive agriculture conference will have every presenter featuring an end user explaining how their product has worked on a farm.

Teys Manager Corporate and Industry Affairs Dr John Langbridge said his company, one of the largest meat processors in Australian, saw plenty of scope for using immersive technology across the cattle production, processing and retail sectors.

Given the potential of the technology to make niche and premium markets available to more producers, it could also be in the processors’ interests to fund equipment, John said.