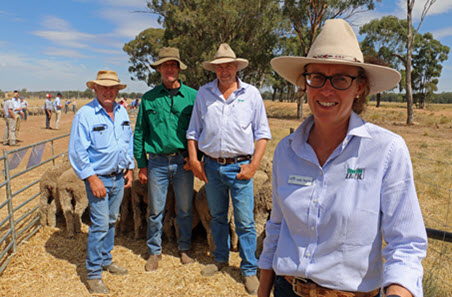 MerinoLink CEO and Project Manager Sally Martin has been overwhelmed by the enthusiasm of participants in a project designed to double the rate of genetic gain in participating Merino flocks by 2022.

It aims to double the rate of genetic gain among participating flocks within five years by providing breeding program support and expertise.

“The project grew out of discussions following a Sheep CRC meeting in March 2017,” Sally said.

“The MDC’s Producer Innovation Fast-track program was mentioned as a way industry might access funding to accelerate adoption of innovation and ‘fast-track’ our genetic progress, in line with the National Livestock Genetics Consortium’s strategic direction.

“After the initial discussions, I emailed all the MerinoLink stud and commercial members, as well as my clients, and asked if anyone would be interested in doing more DNA parentage testing at a reduced price."

Within four days, there was close to $3 million worth of commitment from MerinoLink members.

“I have to say the support I’ve had from MLA has been outstanding, which tells me they’re very serious about having an impact on the industry and are keen to work with us at all levels to achieve this," Sally said.

Best bang for their buck

“There are a number of different genetic and genomic tools available; however, their use can be ad hoc,’’ Sally said.

“We want to help producers strategically and cost-effectively use these tools so they get the best bang for their buck.”

Sally said the collaborative and grassroots nature of the project was one of its biggest strengths.

“The project is driven by producers and service providers. We have great support from MLA, Sheep Genetics and UNE scientists, and we’re working with young people in the service provider space to ensure we have the capacity to support these systems in the long-term,” she said.

“As well as learning from the other breeders’ experiences, we have the direct support of Sheep Genetics and the other service providers,” Malcolm said.

“The reduced cost of testing also means ram breeders can get their whole flocks tested and full pedigreed, which will put everyone on a level playing field in terms of the strength of their data and quality of their breeding values.”