In the marginal rainfall area at Binnu, WA, Don and Paula Nairn work on the principle of growing as much food as they can for their 1,400 Merino ewes during the short growing season. 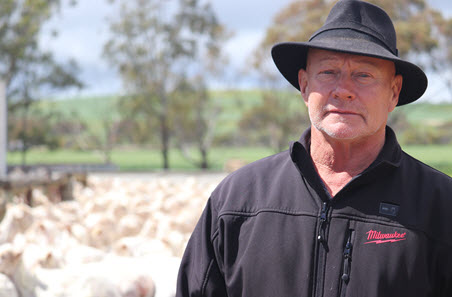 Speaking at a recent MLA-sponsored Pasture and Crop Update in Moora, WA, Don said that after trying various types of pastures on the 3,200ha farm, they had turned their attention to forage crops.

“We focus on cereal type forage crops that are bred for producing a maximum amount of feed during the short growing season we have,” Don said.

“Forage crops can be grazed hard and grazed multiple times,” Don said. If the season plays out okay, some crops are then cut for fodder or taken through to grain harvest.

“They recover quickly and the system is easy and cheap to implement.

“We've learnt that the better the grazing management, the bigger the food bank will be. We can get a Merino lamb dropped in May-June to 45kg by the end of the third week in December with very little feed other than what’s in the paddock. Lupins are sometimes required, as a supplementary feed.”

Canola and brassica varieties are selected for their dry matter production and weed control options and Clearfield canola is chosen for its long growing season.

Don sows most of the forage crops dry, beginning in mid-April and stopping to sow grain and oilseed crops before resuming forage crops.

“The early-sown forage crops can be grazed from the second week of June and we get consistent feed through until December. The forage crops have nitrogen applied after grazing.

“If the ewes are lambing early in April-May, they go into lambing lots.”

The lambing lots are small paddocks of about three hectares (320m by 100m) of well-vegetated land with good shelter.

“The lambing lots have a watering point at each end and we provide lick feeders and baled straw at three or four locations per lot,” he said.

“They’ve come off lick feeders anyway so there is no problem adjusting. We put about 320 ewes in each lot and they go in about two or three weeks before lambing. They move out from the lots and into the forage crops after about 45 days.

“If they’re lambing later, they go straight into forage crops and lamb down in the last week of June.”

When lambing into forage crops, Don tends to lamb down into paddocks that have rows of forage shrubs, which provide additional feed and shelter. His lambing percentage this year was 120% in the best flock and 108% overall.

Don weans lambs onto standing forage crops, usually crops that have been grazed twice then left for this purpose.

To counteract possible mineral imbalances from grazing forage crops, Don feeds a mix of salt, lime and Causmag to all sheep on forage cereals. When there is no green pasture available, the Causmag is taken out.