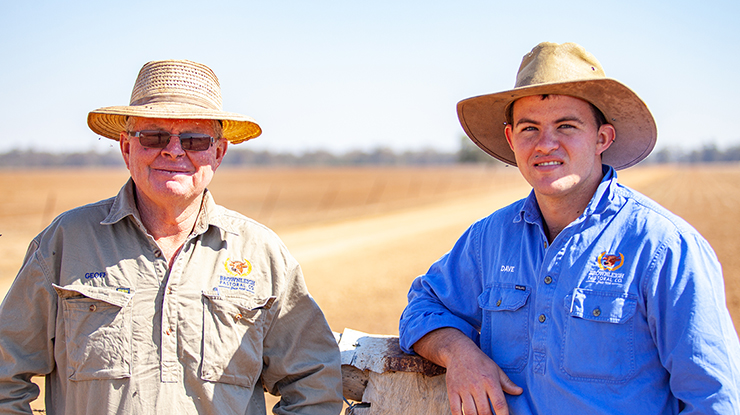 A proven production system and breeding program are among the factors that see Brownleigh Pastoral Company consistently achieve high compliance rates to Meat Standards Australia (MSA) specifications of 98.8% across 2017-2019.

It’s complemented by their average MSA Index of 60.02 during this time.

It’s an achievement that has seen the family partnership win the 2019 MSA Excellence in Eating Quality Most Outstanding Beef Producer Award for Queensland for Band 1.

Owned and operated by the Burey family, Brownleigh Pastoral Company is a mixed-farming enterprise run across three properties in the Darling Downs and north west New South Wales.

The family runs a composite breeding herd of primarily Charolais-Angus cross cattle, comprising between 800 and 1000 females in a normal season, and turning off an average 800 head annually.

Third generation beef producer, David Burey, said the cattle are bred on two breeding properties, the 3886ha ‘Brownleigh’, near Moree, and 4250ha ‘Buckhaven’, at Toobeah. They then follow the same path for finishing on the 3643ha ‘Bulimba Downs’, north of Goondiwindi, operated by his uncle, Stephen Burey.

“All of the cattle are yard-weaned around March every year, and we hold them on the block where they were bred before they go to Bulimba Downs,” David said.

“They’re on grass until they reach a liveweight of 300-350kg. Pastures include improved Buffel grass and bambatsi, and we also put them on fodder crops such as oats.

“We grow all of our own crops and the cattle get supported by wheaten hay, oaten hay and sorghum stubble, so they’re on a rising plane of nutrition.

Brownleigh Pastoral Company has been a registered MSA producer since 2010 – a decision which has benefits for the business and the end consumer.

“Among the benefits of being an MSA producer is that it gives us specifications to aim for,” David said.

“We use the carcase feedback as reassurance for us that we’re meeting the market and still hitting the nail on the head as far as specs are concerned.

“MSA is also a recognised symbol and the consumer really knows what they’re getting when they see the MSA logo.”

David said the genetics used in their breeding program help in their goal to turn-off consistently MSA-compliant cattle.

“We generally buy in a few bulls every year to ensure genetic diversity and we generally go to Minnie-Vale Charolais near Narrabri, and source Angus bulls from Clunie Range at Coolatai,” David said.

“But if you had a look around our paddocks at the moment, it would be 70-75% home-grown bulls. Our genetic pool is fairly sound – we keep a few fresh ones coming along and keep a few of our own after marking every year.

“The genetics are working with our calving percentage always well over 90%, usually about 95%.”