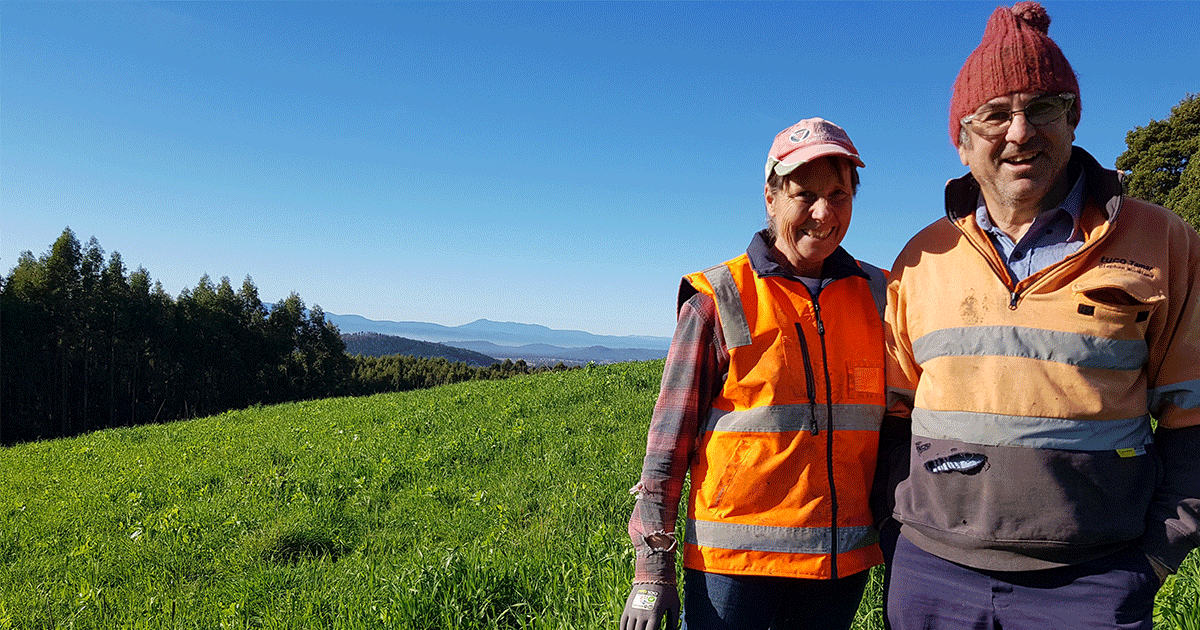 Life has changed for Debbie and Steve Buckland ever since they took part in a Meat & Livestock Australia (MLA) funded Healthy Soils Group.

Gone are the days of sitting in front of the television in the evening to watch a movie!

The pair have become so passionate about sourcing information on soils management that they now spend their evenings scrolling through YouTube videos learning ways to improve the soil health of their 143ha farm at Winkleigh in the West Tamar region of Tasmania.

“We have a reliable but variable rainfall with an average of 1000mm but it has ranged between 600 and 1500mm.”

Around one third of the property, mostly covering steep slopes, is under timber plantations with some of the area reverting to pastures as the timber reaches maturity and is removed.

The property is also home to a self-replacing maternal composite flock, lambing down 500 ewes this year, a 40-cow beef herd, and a 70 doe Boer-infused goat herd.

With plantations all around, the Bucklands have invested in wallaby wire with apron in combination with electric fencing to exclude large numbers of wallabies, which were consuming significant amounts of pasture and making controlled grazing management impossible.

The removal of wallabies was the Bucklands’ first step in improving the farm production and getting greater performance from their pastures.

They then looked at accessing information through the Tamar Natural Resources Management Group which was running pasture trials in the region as well as hosting Healthy Soils Group workshops.

One of the workshops was on drainage, another examined soil characteristics using soil tests, cores and visual assessments and the other was on understanding the importance of having healthy soils.

“We have some waterlogging but one of the big issues was compaction with our heavy subsoils,” Steve said.

“In the past I used to sow a pasture by using offset discs then a power harrow to create a fine seed bed, but the more I learnt the more I realised I was damaging the soil structure, making it vulnerable to erosion and creating compaction.

“Doing the workshops made me appreciate that we had only really been focusing on the pasture and that our soils needed attention.”

“It got the juices flowing with our growing interests in soils, understanding what was happening in the soil profile and with our soil structure – we realised we needed to know more,” Debbie said.

Steve was taking soils tests irregularly but is now using them more regularly to guide his soil management decisions.

Farming next to a lime quarry and near local poppy farmers has meant the Bucklands have been able to access lime and dolomite with low transport costs and use poppy mulch from the nearby alkaloids factory.

Steve has also changed his approach to pasture establishment and is now hard grazing with the sheep instead of using herbicides, and then direct drilling to minimise soil disturbance and protect soil structure. Renovation begins with multi species mixes now.

Deb has focused on improving grazing management across the property by running fewer but larger mobs, and splitting paddocks with electric tapes to improve the length of grazing rotations over winter, optimise pasture utilisation, maintain ground cover and protect the topsoil.

“Improving rotational grazing has meant I can get a feed bank in front of the stock and also prevent stock camps forming and reduce soil compaction,” she said.

“I now regularly walk around with a spade so I can dig a hole and look at what is happening with the soil and plant roots.”

Both Steve and Deb believe taking part in the Healthy Soils Group sparked an interest which has now become a passion.

“I can’t believe we had been farming for so long and knew so little about soils,” Steve said.

“The course was a catalyst – it has sparked a big interest which now has us watching YouTube videos on soils in the evening, instead of sitting back and watching a movie!” Deb said.