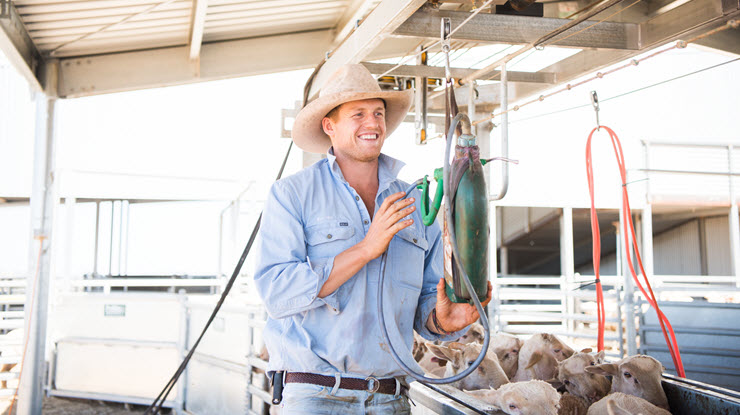 Working with MLA’s market information team and a not‑for‑profit organisation in rural Africa might not be a prerequisite for farm management, but they were invaluable experiences for NSW producer Jack O’Connor.

Jack (pictured) studied agricultural economics at the University of Sydney and worked with MLA before spending 12 months in Uganda, managing a farm and community engagement projects for the Manjeri School Project in Buikwe.

“I gained important life skills such as working in a team, understanding different business structures and embracing challenges,” he said.

He returned to his family’s wool, prime lamb and cropping enterprise, ‘Oxton Park’, in 2017, and has spent the past 18 months immersing himself in the business.

Jack is the third generation to work at Oxton Park, which covers 8,000ha at Harden and Young and employs 12 full‑time equivalent staff.

Succession planning with Oxton Park’s current directors (Jack’s father John, his uncles Paul and Peter, and their cousin Pat) was completed 10 years ago.

Jack and his cousin Brad Cavanagh (a senior manager), are part of the next generation who have returned back to the farm full‑time.

Such a complex family‑run structure presents its share of challenges, so Jack was keen to build his own business skills.

He completed an MLA Business EDGE course in 2018, run by Holmes Sackett, which equipped him with tools and strategies to better understand the essential ingredients of a resilient farming enterprise.

“Working with MLA gave me a strong perspective of the macro‑economics of the industry, but I also wanted to understand the economics of our business. Business EDGE provided important information at both property and industry levels,” Jack said.

He returned to the farm with some solid guiding principles, including these five pointers:

1. Be ready for new opportunities

A readiness to change allows businesses to take advantage of opportunity. For example, the O’Connors sold their beef herd in the early 2000s to focus on sheep, in response to the strengthening global sheepmeat market.

They now sell July‑drop lambs in January at around 50kg liveweight for domestic and export markets.

2. Know your cost of production

“For example, labour is a significant cost, so investing in laneways or improved yard design can make you far more labour‑efficient in the long term.”

“We want to optimise every aspect of our valuable resources, so this app gives us greater transparency across farm activities, improves efficiency and supports management decisions,” Jack said.

3. Business as a whole

Oxton Park’s cropping and livestock divisions are each overseen by two directors, but major business decisions take both enterprises into account.

“We consider how all aspects of our business can benefit, rather than operating as silos. For example, we’re exploring new crop varieties which will also provide grazing options,” Jack said.

They also take a holistic approach when considering new products and services.

“It’s important not to just jump onto the latest thing, but assess what value it can bring to the whole business.

“People are agriculture’s biggest asset, but it can be easy to forget this in tough years,” Jack said.

“Some of the people who work at Oxton Park have been here since my grandfather’s era and have spent more than 40 years mentoring the new generations coming through – they’re people that I respect a great deal and have learnt so much from over the years.”

Business EDGE reinforced the importance of networking, something the well‑travelled 26‑year‑old feels very strongly about.

Whether it’s chatting to fellow producers at workshops and field days, travelling the world or working with business advisors, Jack’s advice is to always be open to new perspectives.

“You can never stop learning. We’re so fortunate in our society to have such great access to so many resources, and we should never take that for granted,” he said.

Find out where upcoming Business EDGE courses are being held.