The fine art of fencing 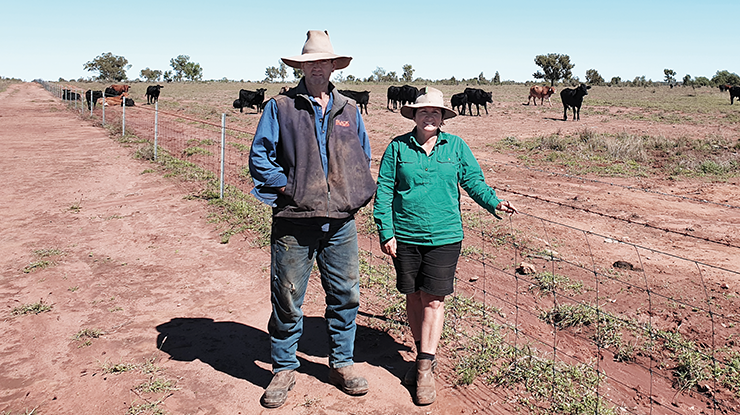 The MLA Donor Company-funded Elders Innovation Project will use Brent and Teresa’s experience to demonstrate the benefits of rotational grazing and good water management in the northern cattle industry.

About 32km of the Gadsbys’ boundary forms part of the Morven cluster fence, which encloses almost 400,000ha.

Brent said before the exclusion fencing was erected, “every time we got a shower of rain, the roos would just mob us”.

“That would effectively put us into drought conditions 6–8 months before we otherwise would have been,” he said.

“The feed would just run out. Now, after every shower of rain, we get a response in the grass.

“We try to look after the grass, to keep a bit of cover at all times.

“We work on rotating stock through the paddocks over the year. That way each paddock gets a good rest in between. We generally don’t mix the stock – they run as separate mobs.

“The cattle go into a paddock first when the grass is longer. The sheep follow. The goats are mainly kept in the rougher paddocks because they like to browse. They like the mulga and the ironwood. We move them on before they eat it out too much.”

Aside from the strong perimeter fence, the Gadsbys have invested in watering points that enable them to control stock access.

“All our dams are fenced off,” Brent said.

“We have three sub‑artesian bores with solar pumps all connected to paddock troughs with poly pipe. When we shift the stock from those paddocks, we empty the trough and turn the water off.”

Brent said this attention to reducing watering points available at any one time has been instrumental in controlling feral animal and kangaroo numbers.

“Sorting out the water cleaned up the feral pigs,” he said.

“They don’t go where there isn’t any water. It’s also helped with controlling other feral animals and roos. It means when we take the stock out of a paddock, there’s nothing grazing it, so the grass and shrubs have a chance to recover.”

When feed is scarce, Brent and Teresa destock their property to control grazing pressure.

“We had one decent shower at the end of summer but haven’t had much rain other than that for months, so we’re selling stock off now,” Brent said.

The first stock to be sold are the cattle – steers go first, then any dry heifers – followed by the Dorpers. The Gadsbys’ intention is to reduce numbers by selling the animals while they’re in good condition.

The goats began as a feral problem but by controlling numbers, managing their grazing and introducing good genetics by introducing Boer billies, they’ve become a lucrative part of the enterprise. The goats are sold direct to meat processors at nearby Charleville, mainly for export. Brent said they have to turn them off quickly to prevent numbers building up too much.

“At present, the goats are the most valuable animal we have – they get up to $7.10 a kilo – and they’re very fast breeders,” he said.