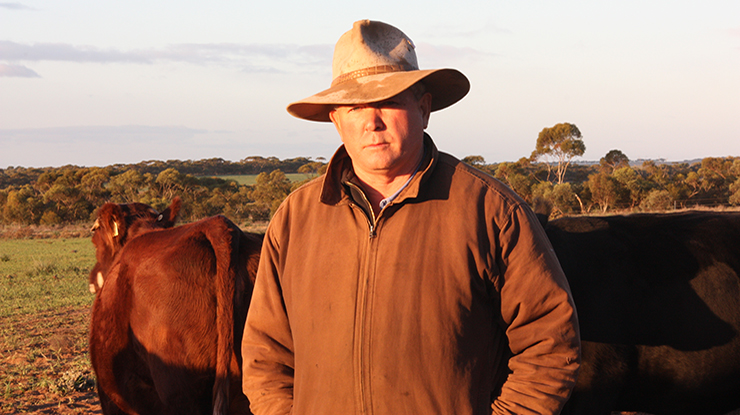 When it comes to transporting livestock, loading and unloading are some of the most dangerous parts of the process and contribute to high rates of workplace injuries and even fatalities.

A safer transporting process begins on-farm, where producers have an important role to play by ensuring that their own facilities, particularly their ramps and forcing yards, are up to scratch.

Victorian cattle producer Leonard Vallance (pictured above) is well aware of the risks associated with handling cattle – 13 years ago he was seriously injured by a cow in his yards.

It’s one of the reasons why Leonard – a former Victorian Farmers Federation livestock group president and Australian Livestock and Rural Transporters Association member – was motivated to sit on the committee tasked with developing the Australian Standard for loading ramps and forcing yards.

He saw the Standard not only as an opportunity to improve safety for handlers, but as a means of ensuring producers can purchase yards and ramps from manufactures that are up to scratch.

“The most critical point of the Standard is that your yards should be operable without the need for you to ever get in with the cattle,” Leonard said.

“This not only protects you, but also keeps safe any other handlers such as transporters or agents who might use the yards.

“Outside of safety, the Standard also ensures that if producers need to update their yards or ramp, they have a checklist for manufacturers about whether their product meets the Standard, such as making sure there are no unacceptable protrusions and handrails comply.”

Leonard only updated his yards 10 years ago, but he recognised through the Standard that there were areas which could still be improved.

He’s currently making upgrades and is using this opportunity to correct other issues he’s found in his set-up.

He has his sights set on the:

“Because we needed to fix the yards up to comply with the Standard, at the same time we’re extending the race to make sure it fits 8–10 cattle, and are moving to a permanent two deck ramp.”

What to think about

Leonard said southern producers who need to upgrade their yards have some unique considerations they should think about when planning the design to boost safety and efficiency.

“A lot of yards in southern Australia were built when four tonne trucks were common, but now there are a lot more B-Doubles and even road trains in use.

“This means that, in order to access older ramps, some trucks end up parked halfway across a main road.

“You need to think about the size of the trucks you’re going to be using and where these will be parked, that they aren’t going to get bogged getting to the race and that power lines are out of the way.

“You also want to think about which direction you put the race to ensure cattle aren’t running into the sun when loading, because this is disruptive for the animals and leads to slower loading times.”

Outside of design, Leonard said it’s also a producer’s responsibility to ensure they have labour available to load a truck as a safety consideration.

“It’s absolutely unacceptable to put the cattle in the yard and then to expect the transporter to load on their own, because this only increases the chance of injury,” Leonard said.

“As a producer, you are responsible for those animals until the back door of the truck closes.”

New levels of safety and efficiency

While Leonard sees a range of benefits which can be achieved from building an appropriate set of yards, he said the biggest by far is safety.

“The greatest benefit from your investment is going to be that you and everyone who works in your yards gets to go home and have tea at night,” Leonard said.

“You can also go from taking an hour and a half to load two decks to getting it done in 20 minutes, animals will be less at risk of injury and you’ll require less handlers to load, which means labour can be used to achieve productivity in other areas of the farm.”