The Feedback podcast from Meat & Livestock Australia (MLA) features stories, news, information and interviews. This includes everything from red meat producers to policy makers and celebrity chefs to scientists.

The podcast – which also contains a snapshot of news from MLA – is for anyone who has a keen interest in the red meat and livestock industry.

Rangeland goats have proven more profitable than trading cattle during drought for central western Queensland producers, Anita Dennis and Joe Taylor. In this interview they share what they learned through a three-year goat enterprise benchmarking project with MLA.

The domestic foodservice sector is a key channel for Australian red meat, typically sourcing about 28% of Australia’s domestic beef supply and 15% of the sheepmeat supply. With the foodservice sector significantly impacted by the COVID-19 pandemic, MLA has launched the Rare Medium Academy website and webinar series to help educate and inspire chefs to keep red meat on the menu.

Episode 6 - Make lamb, not walls: behind the scenes

The making of the annual Australian Lamb summer campaign

Australian Lamb’s annual summer campaign launched in January, showing the country uniting over lamb – and laughs – after a year that has seen Aussies divided more than ever. MLA’s General Manager – Marketing & Insights, Nathan Low takes us behind the scenes of the tongue-in-cheek campaign.

MLA’s new MeatUp forums are a series of large-scale workshops developed by regional working groups of local producers. Before the series kicks off next month, MLA’s Program Manager for Adoption, Sally Leigo and the Chair of the South Australia MeatUp Forum working group, Penny Schulz tell us about the series and why you should come along.

Visit the events page to register for a MeatUp Forum near you.

What changes to the LPA NVD mean for producers

Over the past six months there have been a suite of changes made to the National Vendor Declaration (NVD), providing an easier, more efficient and cost-effective system for the Australian red meat industry. Livestock Movements Supervisor at Mort & Co’s Grassdale Feedlot, Jessica Clarke and Integrity Systems Company Chief Executive Officer, Jane Weatherley explain what the changes mean for producers and how industry has embraced the new eNVD system.

Episode 5 - How do you build a carbon neutral beef brand?

MLA recently co-funded the #BackOnTrack campaign as part of the National Farmer’s Federation’s Telling our Story initiative, which shines a light on the role farmers have played keeping food on our plates during the COVID-19 pandemic.

Natalie Sommerville is a South Australian sheep and grain producer who is one of six feature producers sharing their stories as part of the campaign.

The Australian red meat and livestock industry has set the ambitious target to be Carbon Neutral by 2030. MLA’s Program Manager for Sustainability, Doug McNicholl provides an update on how industry is tracking, and NAPCo’s General Manager – Corporate and Commercial, Stephen Moore shares NAPCo’s journey to launching one of Australia’s first carbon neutral beef brands.

A cuts-based MSA sheepmeat model is in sight

Episode 4 - How much do consumers really know about the red meat industry?

Demonstrating the value of adding annual varieties to increase production

MLA’s Producer Demonstration Sites program supports groups of producers to demonstrate the benefits of new R&D outcomes and technologies. MLA’s Project Manager – Productivity and Market Insights, Alana McEwan explains what the program has delivered over the past 12 months, and Victorian sheep producer Mal Nicholson discusses the outcomes of a PDS site he recently hosted.

Go to mla.com.au/pds for more information or to get involved.

How much do consumers know about the red meat industry?

MLA research has found that despite an environmentally, socially and economically tumultuous year the red meat industry has managed to maintain or grow positive industry perceptions. In this discussion, CEO of market research agency, Pollinate dispels common myths and tells us how consumers really feel about the red meat industry.

Howard Parry-Husbands is the CEO of market research agency, Pollinate. Pollinate’s work with MLA seeks to:

Find out about the latest consumer sentiment research.

Five tips to prepare for the wet season

North Queensland beef producer, Colin Burnett manages ‘Lara Downs’, a 33,000ha property north of Julia Creek, and knows the impacts a variable climate can have on production. In this discussion, Colin shares how he has built business resilience and his top tips on preparing for the wet.

MLA has recently released its 2019-20 Annual Report, which celebrates the resilience of our industry despite the extreme adversities it has faced this year. In this episode, Jason walks us through the highlights from 2019-20 and the focus for the year ahead.

Featured in this episode:

Embracing genetics is a proven way to accelerate livestock productivity. That’s the message Ricky Luhrs took away from an on-farm trial he ran from 2015–17, where he used ASBVs to record increased weights, wool and turnoff time in his Victorian merino and prime lamb flock. Hear about his experience in this interview, and learn how you can find the link between genetics and profit in your own operation.

Producers have their say on MLA’s on-farm research projects

The MLA investment call invites researchers to submit proposals for funding to support on-farm research, development and adoption programs that benefit sheepmeat and grassfed beef producers. In this update, hear how 2020–21’s projects are being prioritised based on their potential to have the greatest impact on the industry, and what producers can expect from the call in 2021–22.

MLA is undertaking a coordinated response to tackling pasture dieback – a destructive condition causing profit losses across northern, central and south-east Queensland. In this interview, hear from Central Queensland producer Greg Lawrence about his experience in identifying and fighting dieback, and from MLA’s David Beatty about an update on the research and what resources are available to producers now.

MLA’s Virtual Classroom program has been developed to improve teachers and students’ understanding of the Australian red meat and livestock industry. Two new education models are coming to the program in 2020 which focus on Australian beef’s role in a healthy lifestyle and balanced meal plan. In this discussion, hear about these new models, and how MLA is using Olympic and Paralympic athletes to engage students on a virtual level.

In this episode Jason Strong explains what MLA’s newly-released Strategic Plan 2020-25 means for red meat producers; we talk to Merimbula cattle producer, Deb Gray who is one of almost 100 fire-affected producers who have accessed support through MLA’s Back to Business Program; MLA Market Insights Manager, Tim Ryan, dissects the trade outlook for the second half of 2020; Central Queensland beef producer, Melinee Leather explains how MSA feedback informs her on-farm decisions; and Integrity Systems Company, Integrity Program Manager, Damon Holmes gives us the rundown on what to expect from changes to National Vendor Declarations, which come into effect from next month.

In episode 1, hear from gold medal winning Australian Paralympian and beef ambassador, Temora’s Scott Reardon, and catch up with MLA Managing Director, Jason Strong for an in-depth interview on how industry is responding to the challenges from COVID-19.

We also get help for producers impacted by bushfires, some red meat cooking tips from MLA sponsored celebrity chef Hayden Quinn, and Victorian producer Fiona Conroy walks us through the making of her family’s carbon neutral farm.

On the ground podcast 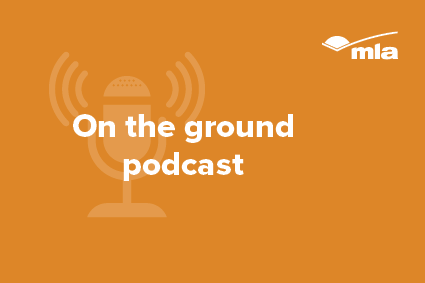 Our fortnightly podcast series On the ground provides the latest information from key international markets.