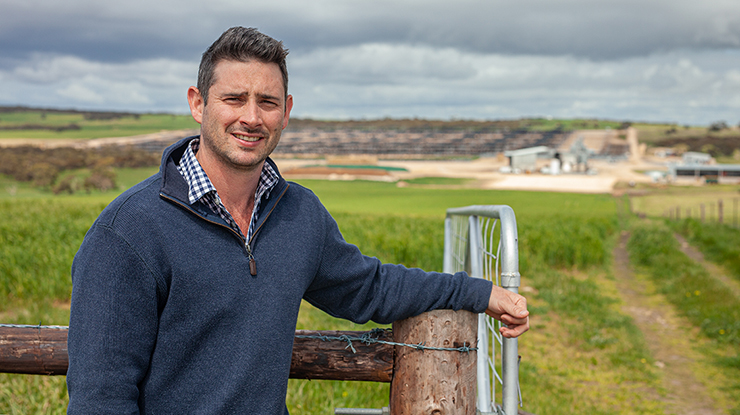 Ensuring best practice animal welfare all the way through the supply chain is a priority for the team at Thomas Foods International’s Iranda Beef Feedlot at Tintinara, South Australia.

Iranda Beef Feedlot won the award based on its average MSA compliance of 99.5%, and average MSA Index of 62.81.

The 17,000 head feedlot is run alongside a backgrounding property running 1,400 Angus cows, and farming operations including pivot irrigation for growing fodder crops for the feedlot, across an aggregation comprising 15,000 hectares.

The feedlot turns off 50,000 head annually, with all cattle sent for MSA grading, regardless of whether they’re destined for domestic or export markets.

“We’re obviously a global company so we feed cattle to target a number of markets including supplying domestically to Woolworths on a weekly basis,” Thomas said.

“We also ship our beef globally with a focus on the 120-day EU market, and mid- and long-fed beef into China and Asia in general.

“We feed for a number of programs, right out to 300-days on feed. A lot of our export programs are geared toward Angus, but we feed all British-breed cattle.

“Our Angus breeder herd is EU accredited, and the progeny go into our 120-day EU program.

“We try to work closely with key cow-calf producers in the south east of South Australia and western Victoria to source cattle for the feedlot.”

“In a feedlot, you’re lucky that you have a lot of control over nutrition. We grow our own lucerne hay and cereal grain silage in winter and corn and sorghum silage in summer,” Thomas said.

“We have installed new handling facilities throughout the feedlot and we really concentrate on low-stress animal handling.

“A lot of engineering and thought has gone into yard and loading design and how we handle the cattle.

“Animal welfare is key, and we work really closely with our processing facilities. For example, if there’s a heat event, we really monitor conditions and when we’re sending cattle for processing.

“If that means having to shift cattle in the middle of the night to avoid heat, that’s what we do.”

As was widely reported at the time, TFI’s processing facility near Murray Bridge suffered significant damage in a fire in January 2018. As a consequence, cattle from Iranda Beef Feedlot are being processed in South Australia to supply Woolworths, and at Pakenham, Victoria for export markets.

For the feedlot, MSA compliance is valuable on many levels.

“At the production level, MSA compliance is a good indicator that you’re doing the right thing,” Thomas said.

“If your cattle are grading and all reaching MSA specifications, you’re not getting bruising or any dark cutters, then it’s an indicator of quality and that you’re doing it right.

“At the feedlot level it’s a real indicator that our systems are working, and then at the processor level, it’s opening and holding markets.

“I look at the feedback provided on the myMSA platform, but we are looking to start to feed that information into our feedlot software to track animals through from purchase to carcase. In the very near future we’ll be pulling data out of that on a daily basis.”

As a 2019 Nuffield Scholar, Thomas has been travelling overseas researching feedlot animal welfare practices and said the MSA grading system has been a talking point in his travels.

“The first thing that people talk to me about on pretty much every continent is our grading system and how envious they are of it, whether it’s the US, Brazil, or Eastern Europe,” Thomas said.

“The bigger picture is the grading system gives you something to really stand behind. It gives you a lot of confidence, particularly being aligned with a processor.”