Across Asia, market access is redefining the competitive landscape in high-value and commodity beef markets. Australian beef is facing heightened competitive pressure at a time when domestic supplies are tight and Australian cattle prices are increasingly out of kilter with global markets. Some of these shifts are short-term and temporary, while others are part of a longer-term structural transition in the makeup of Asian imported beef markets.

US ramping up shipments to China

Trans-pacific US exports to North Asia have faced challenges this year. Beef shipments slowed as plants shuttered during the first wave of COVID-19; then carriers excessively blanked sailings to reduce spare capacity; and, more recently, reefer container shortages and maxed-out freight capacity have hamstrung those trying to get boxes out of west coast ports.

That said, in recent weeks, US beef shipments to China have been ramping up, averaging in excess of 2,400 tonnes shipped weight (swt) per week through November. For the year-to-date, the US has shipped 31,300 tonnes swt of beef to China and, according to the USDA, US exporters had 26,800 tonnes swt in outstanding orders yet to be dispatched as of the end of November.

While US beef exports to China are still relatively minor compared to Australia’s footprint in the market (181,500 tonnes swt for the year-to-November), it reflects a significant increase from the 10,500 tonnes swt recorded in 2019 and comes at a time when Australia is navigating restricted technical access following recent plant suspensions.

Emerging competition from the US in the premium beef segment in China also coincides with heightened supply and price pressure from South America in the commodity beef market.

US beef exports to China were advanced by President Trump’s Phase 1 trade deal, which wound back tariffs applied during the trade war and permitted hormone treated beef (but not beta-agonist treated product) into the market.

While Chinese purchases of US goods under the Phase 1 agreement have massively undershot targets this year, in the second half of 2020 beef has been one category to meet or exceed expectations. The future of this trade will largely hinge on the broader US-China political and economic relationship and how it is shaped by US trade policy under a new Biden administration.

A tale of two safeguards

On another front, Australia triggered its beef safeguard into Korea on 24 November, raising the applied tariff from 21.3% to 30.0% through to the end of 2020. While the safeguard was triggered with only a month of the year outstanding, it remains disruptive for chilled product entering established retail and foodservice channels. For the rest of the year, the tariff advantage of US beef (under KORUS) over Australian product (under KAFTA) will increase from 5.3% to 14.0%.

However, in Japan, the conditions are set for the inverse scenario to unfold. Under the US-Japan deal on agriculture, signed at the end of 2019, the US was awarded equivalent tariff access to what was granted to CPTPP members, although with a smaller country-specific safeguard of 242,000 tonnes swt in the current Japanese financial year (ending 31 March).

In contrast, the shared Comprehensive and Progressive Agreement for Trans-Pacific Partnership (CPTPP) Japan beef safeguard, which Australia operates in, is only 34% utilised.

Just as the US will be the main beneficiary of Australia triggering its Korea beef safeguard, Australia will potentially enjoy an access advantage if the US triggers its Japan beef safeguard.

The rapid increase in beef shipments from Brazil and Argentina into China – thanks, largely, to a spike in protein demand brought about by African Swine Fever in China and increased establishment approvals in South America – has received widespread coverage in the last couple of years. However, other Asian markets have also recorded increased beef imports from South America – trade which has traditionally been restricted due to animal health reasons, notably the foot and mouth disease (FMD) status in key countries.

Paraguay, one of the few countries to maintain diplomatic ties with Taiwan, struck a deal with the country in 2018 for tariff-free beef access (Australia and most other countries face a most-favoured nation tariff of NT$10/kg). Taiwanese imports of beef from Paraguay have almost doubled so far this year to 17,000 tonnes swt over the January-to-September period (not far behind Australia’s share in the market). Paraguay has emerged as a cost-competitive supplier of frozen grassfed primals, but it also shipped its first chilled product into Taiwan this year (although just 30 tonnes so far).

Brazil gained access, albeit heavily restricted, to Indonesia just over a year ago and shipped 3,500 tonnes swt at the end of 2019. After a subsequent six-month hiatus, Indonesia imported 2,500 tonnes of Brazilian beef in the September quarter. If Chinese demand were to stall and Indonesia were to allocate more import permits, beef shipments from Brazil could quickly pivot into this emerging market.

Elsewhere in South-East Asia, Brazilian beef shipments into the Philippines have increased 18% so far this year to 33,300 tonnes swt over the January-to-October period. Exports to Singapore and Malaysia are up 4% and 7%, at 17,100 tonnes swt and 5,200 tonnes swt, respectively.

Uruguay and Patagonia (the region in Argentina recognised as FMD-free without vaccination) gained beef access to the high-value Japan market in 2019 and 2018, respectively. Uruguay has expanded its footprint in Japan this year to just over 2,000 tonnes swt over the January-to-October period, but its share of the import market remains just 0.4%. Patagonia is not the engine of Argentina’s beef sector and only minor shipments (9 tonnes so far this year) to Japan have subsequently materialised under the new access.

In 2010, Australia held a fairly comfortable 41% share of a broader Asia-Pacific imported beef market thanks to steady demand, an exportable surplus, unrivalled animal health status, strong reputation and proximity to market (Australia’s share peaked at 59% in 2005 when the US was locked out of Japan and Korea due to bovine spongiform encephalopathy (BSE) – see chart below). These fundamentals have remained largely intact over the last decade, however, Asia’s appetite for meat and high quality beef has grown beyond Australia’s capability, particularly following the explosive import growth from China over the last three years. 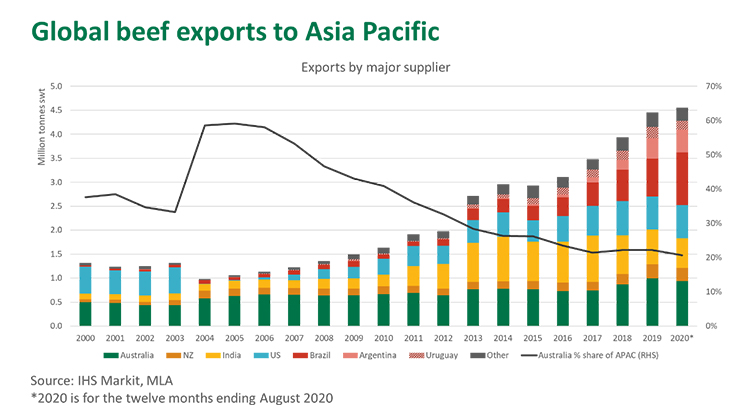 Meanwhile, animal health barriers are now less of an obstacle for Australia’s competitors (e.g. the US no longer faces BSE-related restrictions in Japan, Korea and China; South America has overcome FMD related trade bans in some markets). This has coincided with South American beef producers facing subdued demand in their domestic and traditional export markets (Europe, the Middle East and Russia).

While Australia has increased its volume and share of exports to Asia Pacific (75% in 2019 and 2020), its share of the regional import market has receded from a peak of 59% in 2005 to 21% so far this year. Brazil has emerged, for the first time, to be the largest supplier into the region (although this is dominated by trade to China).

Despite the increasingly crowded global beef trade environment, Australia is forecast to remain a large and key player in Asian markets – benefiting from strong consumer appeal and trust built over many years. However, evolving market access arrangements will continue to be key in shaping the competitive landscape. This means the Australian beef supply chain must continue to focus on removing regulatory and red tape costs, as well as tariff and non-tariff barriers to trade, while positioning itself as a premium, safe and high quality supplier in order to stay ahead of encroaching competition across the region.