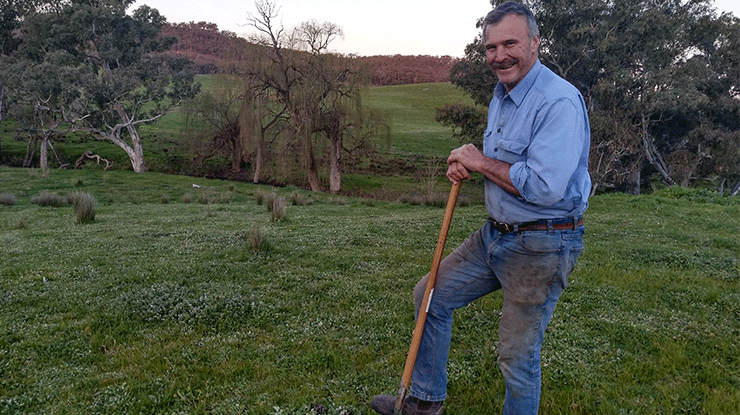 Phil Davis (pictured) is hosting a dung beetle monitoring site at his Tarcutta property, where the insects play a critical role in farm sustainability.

“We’re moving this way at the sheep block, ‘Elimatta’, as well.”

The third property, ‘Tarcutta House’, is an irrigation block where the cattle still need to be drenched for liver fluke.

The rotational grazing strategy at Somerset is around 50 cows and calves per hectare for two or three days.

“They eat some of the grass, but also trample some of it while dropping manure and urine all over the paddock, feeding the soil microbes.”

Phil said this is where the dung beetles play their part.

“The dung beetles then do two vitally important jobs for us: they take the manure down into the soil so it doesn’t spoil the grass it’s sitting on, and in doing this also aerate the soil, increasing water infiltration and plant health, and lift our soil carbon levels.

“When they’re really busy you can go in a paddock that was grazed a week earlier and you won’t find a cow pat anywhere – just little piles of dirt.”

The stocking rate is lower on the irrigation block, at around 30 dry sheep equivalent/ha, but the manure load is still quite significant.

“After we remove the stock, we let the crop mature and cut it for hay. If we didn’t have dung beetles the hay would be full of cow pat contamination.”

He hopes the project will give him a better understanding of dung beetles and any steps he can take to make sure they stick around.

“Our current beetles are inactive from late spring to summer, so I’m also hoping the project can deliver on its aim of filling in seasonal gaps with new species,” he said.

Do you have dung beetles?

Use your phone to make a report by uploading up to four photos and the GPS location of the sighting.

Experts from the DBEE project will attempt to identify your beetles and reply back to your device.

Visit dungbeetles.com.au/report-an-observation for more information, and download the app from the App Store or Google Play.