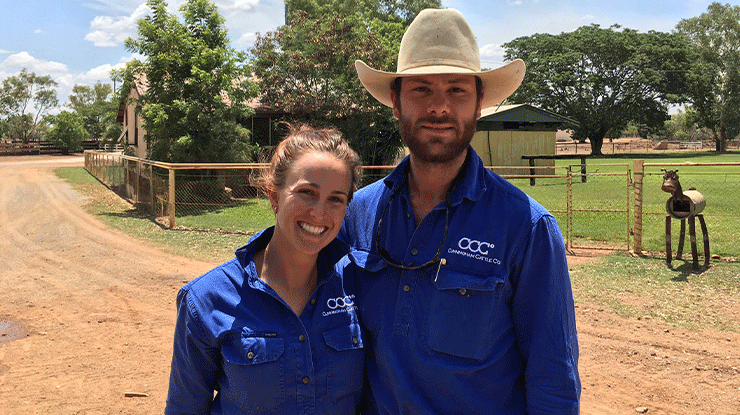 A strong focus on managing weaners – as well as investing in wire and water – is part of a concerted effort to lift productivity at Esmeralda Station in north Queensland, and the results are positive.

Esmeralda was purchased by the Cunningham Cattle Co (Gunn Agri) in 2016 and is managed by Bryce and Sarah Foster.

The station is a breeding block, with weaners sent to the company’s southern properties.

Weaner management at Esmeralda begins with the breeders, who receive year‑round lick to maintain condition and, as a result, fertility.

“From May to December we use a dry‑season lick which is high in urea to keep up their protein,” Bryce said.

“The wet‑season lick is high in phosphorus – we actually keep it out all year to provide minerals and proteins to keep the cows’ body scores up.”

In‑season calves are born after October, at the start of the wet season, so the surge of feed means they’re ready to be weaned by the first muster around Easter.

“We pregnancy test on the first round of mustering and take out the cows which will calve out of season,” Bryce said.

“Those are segregated so they can be fed up.”

They leave the second round of mustering as late as possible at the end of the dry season, then pull off these late calves.

“Anything above 80kg comes off.”

The weaners are then drafted and processed when they’re mustered.

“They’re all tagged with electronic ID, backlined, vaccinated, branded, weighed and drafted into lines depending on their weight,” Sarah said.

There are two strategies for weaner management:

Esmerelda Station is one of the northern grazing businesses taking advantage of livestock management strategies based on research and development through a partnership between MLA Donor Company and Elders.

The three-year pilot project provides producers with easier access to MLA’s research outcomes, tools and resources and could pave the way for similar programs nationally.

The Fosters have drawn on advice from their local Elders agency in Townsville to meet the nutritional requirements of their weaners.

Their criteria included pellets with a milk supplement to support smaller calves, and they settled on a high‑protein, high‑energy feed. This feed underpins growth rates for Esmerelda’s weaners, which can be above 1kg/day.

Sarah and Bryce were also mindful of the labour requirements of feeding out.

“We use pellet feeders and buy the pellets in one tonne bags, and we also have a 10,000L tank for molasses. We can put a lot out at once, which makes life easier,” Sarah said.

Esmerelda’s approach to weaning is designed to lift reproduction rates, which they have achieved – boosting weaning rates by 17%.

Pulling calves off as soon as possible gives breeders a greater chance to improve condition and conceive again.

As with many northern businesses, bulls stay in the paddock all year.

“We’re not there yet with controlled joining, but basically the season does it for us,” Bryce said.

“The cows don’t cycle until it rains.”

Temperament and conformation are the main criteria for retaining heifers, as well as reproductive performance.

“We give heifers three months to join and if they don’t preg‑test in calf the first year, they’re out. We also preg‑test the dry cows. Any dry and empty breeders go.”

Pregnancy testing at mustering is an important component of this strategy, so Bryce and Sarah can manage breeders based on pregnancy status.

Infrastructure is the final piece of the puzzle of their approach to management.

This includes regular maintenance of fences to ensure cattle stay in their designated paddock. They avoid fencing across rivers to reduce the risk of fences washing away in floods and have fenced off sections of river frontage.

“We fence to manage the cattle properly and to spell the country, so we can look after it and make the most of the feed,” Bryce said.

“We also make sure water troughs are clean and cattle have plenty of water.”