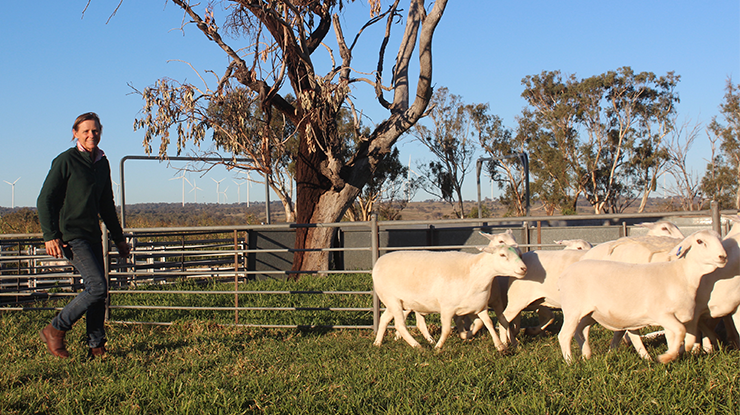 Producer Kym Thomas has an entirely new way of looking at her business, and is extremely focused on managing for climate variability and future droughts, including ensuring strong financial support from lenders to access money when needed.

When Kym Thomas and her family decided the time was right to expand their Cunnamulla-based Australian White sheep business and improve resistance to dry through purchasing a block at Inverell, they were unaware of the scale of drought they were about to face across the two properties.

This drought resulted in Kym and son Tony carrying out a number of tough and emotionally challenging decisions, including largely destocking, sending stock on agistment and making extremely tough financial calls.

Out the other side of the drought, they have an entirely new way of looking at their business, and are extremely focused on managing for climate variability and future droughts, including ensuring strong financial support from lenders to access money when needed.

“Much of what we’ve been doing over the past four years has just concerned surviving with extremely limited rainfall, but it’s also given us some time to think of the future and make sure we’re better prepared for whatever is thrown at us next,” Kym said.

A business for all seasons

The drought had a terrible impact on feed and water across both of Kym’s properties, and on their speciality Australian White flock, which they breed with a strong focus on eating quality to access new market opportunities.

“We started in 2013 with 15,000 breeding ewes. By the summer of 2019–20, we were down to around 2,000 breeding ewes, all on our Cunnamulla block because the drought at Inverell was too severe, we were out of water and concerned about our soil condition,” Kym said.

“We did manage to breed a few lambs and had some goats that saved our bacon, but between our properties, agisting and feeding stock, it was a juggling match and we couldn’t do much other than sell a majority of our breeding stock.”

Kym said the longevity of the drought made them realise there were areas of their business they could improve to ensure they were better prepared for dry conditions in the future.

“When the drought was first kicking off, we didn’t think we would need to feed sheep,” she said.

“As it got worse, we knew feeding would be required, so we purchased intensive feeding equipment that helped keep condition on our stock and which we’ll always now have for when the pasture runs out.”

Kym said they were also able to improve their water infrastructure for their stock.

“We put in bores, tanks and troughs in the drought as we had no dam water, then we emptied the Inverell block as the feed ran out and crops failed. As it started to rain again in 2020, we planted enough crops to produce 2,000 silage bales,” she said.

“As well as some lupins and corn we’ve got in silos at Cunnamulla, it means we’ve now got around two years of drought feed stockpiled.”

“We also put in new bores on Rockleigh to shore up future water supply as insurance if the dams go dry again. Cunnamulla has proven access to good bores from the Artesian Basin, which is the core of our stock waters.

Kym said the drought also helped reinforce the importance of being on top of their financials. She concluded that to run a successful business, more loan funds would be needed.

She first accessed help with the financing process back in 2016 through the Agri Business Development Institute (ABDI), and again during the drought, and believes this step has been vital in securing the right loans for their business goals.

“In 2016, we went to ABDI when we were thinking about purchasing the block at Inverell, and also because we needed to look at where we were heading in the future with my son coming into the business,” she said.

“About twelve months ago, we realised we needed to revisit our loan deal then refinance as a direct result of the drought. We had Gordon Stone of ABDI’s assistance, and he helped us short-circuit the process.

“It’s been really good, as we have a far better idea of what’s going on regarding our money, and because it removed many of the frustrations that can be associated with trying to tackle the loan process on your own.”

ABDI is currently offering their ‘Lender Ready’ course, developed in partnership with MLA for red meat business owners like Kym to learn the ins and outs of the lending process, and how they can best prepare to secure the right loan for their needs.

Having been through the lending process, Kym has some helpful tips on what producers should consider when applying for a loan.

Kym said that as they were going through the lending process, at the last minute they realised the preferred bank had far different expectations than the family on the structure of the loan.

“We realised we hadn’t sought sufficient legal advice to clearly iron out the terms of the loan,” Kym said.

“Legals have a cost associated with them, but it’s important to know what the bank’s expectations are, and that these align with your own business expectations.”

Every bank has a personality, they are all different

“I made the mistake of thinking that if I were a bank manager, how would I view myself? You can’t fall into this trap, because they all look for different things.”

Kym said it is also important that you get to talk to the bank credit team, which she discovered some banks will not let you do, as it can lead to a miscommunication of expectations.

Be prepared to divulge personal information

Kym said producers should be aware that banks will ask for a lot of personal information as part of an application, and that this can make you feel vulnerable.

“I felt at times like the information I was putting forward was really treading into territory where I didn’t feel comfortable,” she said.

“In these times, you have to understand that for the bank, it’s all about guaranteeing the security of that loan, and this information will help them to do so.”

Getting an optimum result

“Early in our planning, we worked out exactly what loan deal we wanted, but with different bank personalities, this proved hard to get,” Kym said.

“Only through persistence have we gotten exactly what we wanted, so you should be prepared to do the hard yards”.

Click here for more information about the new lender-ready program.