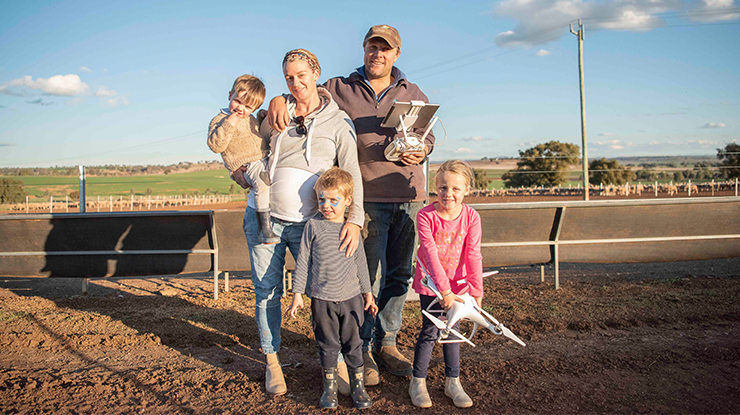 The links in the lamb supply chain between the Simpson family's ‘Binginbar Farms’ and the dinner plate are very few. Sourcing lambs from across the nation, the Simpsons then finish them for processing at Thomas Foods International's Tamworth facility, for which they were the largest single lamb supplier in 2019. From there, the lamb is destined for local and international dinner plates.

The Simpsons have directly reached out to their consumers to understand the value of provenance data in ensuring that quality meat is produced in a safe, ethical, and sustainable manner.

"Our family has always aimed to run a sustainable business that leaves our children with a property in better condition than when we took over. Now, after understanding exactly what our customer is after in red meat, that goal has expanded to having a carbon neutral operation," Nathan Simpson said.

"With the number of lambs we can finish, we've got the potential to develop a certified carbon neutral lamb brand, something we started exploring about five years ago and, while there are a few challenges we have to work through, it can be achieved."

Binginbar Farms has already taken steps to set the foundations for their carbon neutral brand. Step one being to develop a digital system for tracking individual animals to provide full provenance.

Working with MLA Donor Company in its Producer Innovation Fast-Track program, the Simpsons developed an online platform to record all on-farm animal data for interpretation, analysis and quality assurance. Data is matched with processing and grading feedback from Thomas Foods to identify ideal performers.

Step two was to do a carbon account through MLA’s pilot carbon accounting research project for an average year of pasture, crop and meat production for their enterprise. These are Nathan’s key learnings from the pilot:

Focus areas for the future

The next steps in the Simpsons’ carbon neutral branding strategy involve the following focus areas:

Animals that convert feed with the greatest efficiency to reach target weights will be identified to inform future purchasing decisions.

"We'll target second-cross lambs because their growth rates are better. Due to the drought, we haven't been able to be too picky and generally we can't control the genetics used by breeders," Nathan said.

To ensure that crops can be sown into standing stubbles without disturbing soils and losing soil carbon, the Simpsons have upgraded their seeder (purchasing a Janke tyne drill with coulter openers on 250mm row spacings).

A decade of tree planting

More than 100ha of non-arable land has been identified for tree planting, with 15ha sown in 2020. Species (river gum, box, casuarinas and kurrajongs) were chosen for persistence, fast growth and being indigenous to the region.

Nathan acknowledges the many benefits of tree planting, not just in terms of carbon, and said that one day the practice could support entering biodiversity offset schemes that lift the value of non-arable areas of the farm.

While fences are initially required to exclude livestock from tree planting areas, Nathan plans to allow stock to access these areas once trees are established.

Nathan said that moving towards carbon neutrality isn’t a simple process, but that it does offer many returns.

"It's not easy and requires planning to improve your net carbon position. The other thing I've learned is that you have to be profitable in the first place. Just planting 15ha of trees cost $10,000," Nathan said.

The cost included labour, fencing and trees and Nathan said the returns are measured in increased biodiversity, improved conditions for livestock, aesthetics and improving the landscape in non-arable areas.