Australian cattle exports have continued to expand over the last twelve months, after a couple of reduced years from 2016-2018. Ongoing dry conditions across much of the country have elevated turnoff and kept cattle flowing onto boats. However, recent growth does not reflect the challenging trading conditions when shipping cattle to markets in South East Asia.

The persistent high-cost of Australian cattle remains the greatest challenge to the trade, but the industry must also navigate the competitive threat from Brazil in a price-sensitive region and evolving regulations in Indonesian, Australia’s largest cattle market.

The Indonesian Government has been attempting to increase the country’s breeding herd through a number of programs and measures, including the recent requirement on importers to bring in one fertile female for every five feeder cattle (which would equate to breeders accounting for 16.7% of shipments). Over the 36 months following the 5:1 decree, introduced in October 2016, Australia exported 42,000 breeders to Indonesia, reflecting 2.4% of total shipments.

The government of Indonesia has subsequently revised the breeder policy to encourage lot feeders to import 5% of cattle as fertile breeders (18-36 months old and not spayed), effective as of July 2019.

The new policy may still prove a challenging bar to hit, given that the new threshold is double what was reached over the length of the previous policy target. If Australia was to export 650,000 feeders per annum going forward, that would require 34,000 breeders per annum.

According to ABS mid-2018 herd figures, there were 6.26 million female beef cattle distributed across the Pilbara, Kimberley, Northern Territory, and North and Central Queensland that could potentially supply the Indonesia breeder trade. However, assuming just one-third of those fit the 18-36 month Indonesia age requirement, this pool reduces to about 2.06 million female beef cattle. In addition, the Australian herd has declined since the 2018 census due to severe drought and flooding in North Queensland, further restricting cattle available.

While there is still a large pool of potentially eligible cattle to draw from, the majority of those cattle would typically be held back as replacements, while those traded on the market would also face buying competition from lot feeders, processors and, particularly if there was a decent wet season, restockers. Demand for breeders could become particularly acute as producers in the Queensland Gulf look to rebuild herds lost to floods.

The new breeder policy will still add costs to the Australia-Indonesia cattle supply chain, which coincides with increasing competitive pressure from low-cost suppliers. As discussed recently, Indonesia recently permitted Brazil to supply frozen beef to the market, on top of the existing supply of cheap Indian buffalo. Encouragingly, Indonesian consumers’ distinct preference for fresh beef, not frozen, means that Indonesia will remain a key live export market, particularly for northern Australia. While the anticipated ratification of IA-CEPA will provide some trade certainty, with strong Australian cattle prices anticipated when the season breaks, both sides of the supply chain will have to find further efficiencies to remain competitive.

In this environment the Australian cattle and beef industry must also adapt to the consumers of tomorrow, who are seeking premium quality product, underpinned by systems they can trust, but also demanding to know more about the beef they consume, including information on provenance, traceability, welfare and sustainability.

When trading slaughter cattle, Vietnam importers’ profits are particularly sensitive to the price of Australian cattle, which accounts for the bulk of their costs but is highly-dependent upon seasonal conditions and other free-market forces. While Vietnam wet market beef prices have increased somewhat of late – thanks to a general lack of cattle and the spread of ASF in Vietnam and neighbouring countries – they are notoriously sticky. Hence, the slaughter trade to Vietnam boomed in 2014-2015 when cattle were cheap but then had to adjust once the Australian market lifted.

Australian cattle prices have remained high compared to historical norms, increasing the appeal of importing feeders to add weight and value in-market. This partly explains the lift in feeder shipments to Vietnam.

However, the pricing pressures may be further dialled up with the possibility of Brazil gaining cattle access to the Vietnam market, potentially before the end of this calendar year. Vietnam is already endemic with Foot-and-Mouth Disease (FMD), so Australia has little differentiating appeal over Brazil from an animal health status when it comes to slaughter cattle.

While facing a much steeper freight bill and a 5% import duty, Brazil has cheaper cattle, with its market decoupling from Australia since 2015 thanks to a marked decline in its currency. Brazil, which exported 527,000 head to the Middle East over the last twelve months, could potentially land slaughter cattle in Vietnam at a price below that of Australian slaughter weight cattle. 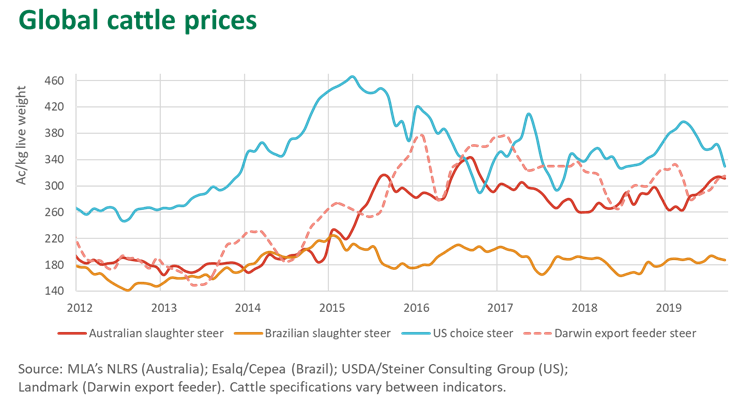 If Brazil was to send large lines of cattle to Vietnam, Australia would increasingly need to focus on shipping feeder cattle, so Vietnamese feedlots can make money from feeding margins rather than relying on trading margins, or otherwise expect lower slaughter cattle pricing to remain cost competitive. However, the immature nature of the industry in Vietnam will expose technical gaps in capability and feeder cattle will reduce cash flow which is important for Vietnamese traders.

MLA, through the work of the Live Export Program (LEP), is working with supply chains in Vietnam to understand business models and development bottleneck to develop specific programs to promote an increase in throughput through select key facilities. The LEP has already demonstrated that this approach creates reliance on Australian cattle, as they provide consistency and predictability that is a point of difference to sourcing cattle locally. Increasing throughput also creates an efficiency of scale and provides a platform to add value to either select cuts or individual animals, which is needed for Australian cattle to be differentiated from beef from local or Brazilian cattle.