Meat & Livestock Australia (MLA) is again proud to be honouring Australian independent butchers this November by partnering with media personality and ‘Crap Housewife’ Jessica Rowe in sharing stories of some of our greatest local butchers’ tips and tricks to make the most of summer lamb and beef.

Jessica has been spending time in the kitchen with some of Sydney’s finest butchers who have been teaching her some simple meat preparation and cooking skills for an online Ask Your Butcher video series which can be seen here. 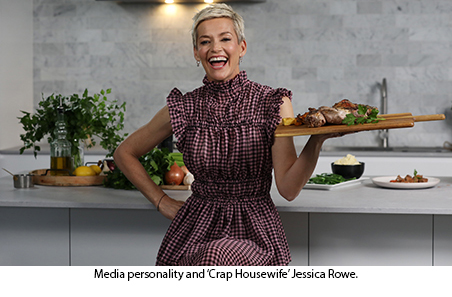 Sydney butchers, Mark Rogers from Stapleton’s Quality Meats in Kareela, Bradley Callaghan from Auburn Meadow Meats in Rose Bay, and Steve Rosevear of Steve’s Fine Meats in Carlingford, share their tips with Jessica on how to make the perfect kebab skewer, how to brown meat to perfection and how to carve a leg of lamb.

“Many people know through my website Crap Housewife, that I’m a shocking cook!” Ms Rowe said.

“So, it’s great that each time I meet up with butchers that I learn a bit more. Butchers are such a great source of knowledge, prepare delicious, easy to cook cuts, and always have great suggestions for meals, so it’s really worthwhile getting to know your local outlet. Plus, your cooking really will improve - trust me.”

Butchers have reported that the increased focus on the home and cooking this year has been good for business.

“The strange panic buying of 2020 left us a bit unprepared for the wave of customers and the amounts of meat that were in demand once COVID-19 hit,” said Steve Rosevear of Steve’s Fine Meats in Carlingford.

“However, we worked day and night, and did our best to meet demand.

“It’s been more hands on with customers this year as a result. The most rewarding moments are always when customers come back and thank us for supplying the perfect cut of meat and giving them the correct cooking instructions or advice.

“I also try to help customers get the most value out of cuts. So, I tell people if you’re carving a roast leg of lamb, once all the meat is off, the bones can be frozen and used at a later date for a bone broth.

Bradley Callaghan, whose butcher shop in Rose Bay has been in existence for 75 years, said the increased attention for plant-based meats of late has not deterred customer demand.

“I still get a lot of enjoyment out of selling ‘real meat’. Lamb cutlets along with eye fillet steak have been our best-sellers this year. My best tip is that browning beef or lamb before adding the pieces into a casserole, curry or stew is the best way to ensure juicy, succulent meat packed full of flavour,” Mr Callaghan said.

Mark Rogers from Stapleton’s Quality Meats in Kareela said ready-to-cook meats which have already been pre-seasoned and dressed have become especially popular for the time-poor. His quality range of ready meals is one of the reasons why his Kareela store won The Best Butcher store award in the Sutherland Shire for 2019.

Additionally, Jessica also spent time in the kitchen getting tips from two of Australia’s most successful female butchers - Sarah Wadland of Farmgate to Plate in Miranda, and Bonnie Ewan of Lucas Meats in Bronte, who recently won the title of Australia’s Best Apprentice Butcher 2020 at the age of just 25.

“The lift in sales through the independent retail channel during COVID-19 has reiterated the important role local butchers play in local communities and promoting red meat,” Mr Cameron said.

“The Greatest Butcher on Your Block campaign set out to re-connect shoppers to the greatest butcher on their block and give them a reason to support their local butcher. The first phase led to an increase in foot traffic and volume of sales for both beef and lamb during the campaign period.”

This latest campaign follows the highly successful first instalment of The Greatest Butchers on Your Block campaign, which was launched by MLA in November 2019.

To bring the butcher out from behind the counter, MLA partnered with award-winning journalist, Jessica Rowe to be the face and voice of local butchers and help tell our story of local community, sustainability and nutrition.