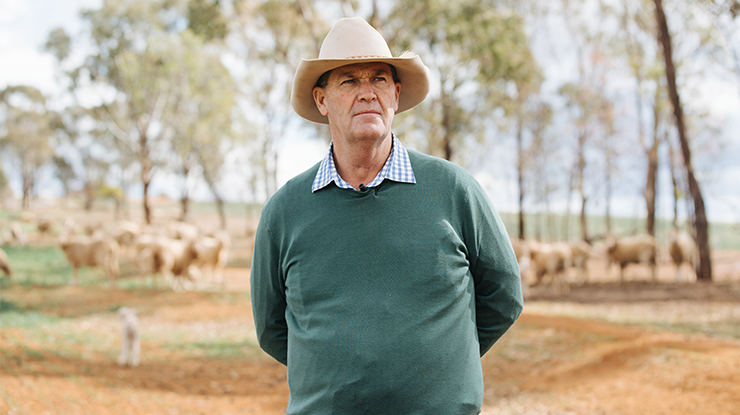 NSW producer Nigel Kerin said setting up containment feeding has proven to be one of the best decisions for his business to date.

A decision to undertake containment feeding for 2,800 ewes and 3,700 lambs has paid off for producers Nigel and Kate Kerin, ensuring their core breeding stock has not only survived but thrived amid ongoing drought.

In a bid to preserve groundcover at their Yeoval property in central-west NSW, the Kerins established a containment feeding system in June 2019 for their Poll Merino ewes and lambs, which they utilised for five months.

Nigel said it’s proven to be one of their best business decisions to date, resulting in not only productivity, animal welfare and environmental benefits, but the creation of an environment where people are happy to be.

“Making decisions based on landscape preservation creates a good feeling and gives you something to really focus on, whether you own the business or whether you’re working in it,” Nigel said.

“When we made the move to containment feeding, we were into two-and-a-half years of ongoing dry. We had matched stocking rate to carrying capacity and continued to sell down our livestock inventory.

Nigel said he kept the system as low-stress as possible. The lambs were given their first vaccinations 14 days before weaning and weren’t marked until two weeks after they went into containment – by then, they had learnt how to feed and set up their social structure.

The Kerins used existing on-farm infrastructure, comprising 2ha paddocks with trees in them, close to their grain silos, on a slight slope, with water troughs already installed.

“We used 300mm galvanised C section purlins as feed troughs, arranged in single line, which we tek-screwed to purlin offcuts to raise the purlins off the ground to allow the wind to blow rubbish underneath the purlins,” Nigel said.

“We used a system that I call skip pen feeding, and that was all about animal welfare. We had four mobs, but there were five pens with the purlins. So we would go to the first pen in the morning and run the feed out in it, open the gate, let one mob in, then go to the next pen, feed out and let the next mob in and so on.

“It removed all the stress of them running around the feed trailer like they normally would trail feeding, and it was calm and controlled.”

The Kerins used 300mm galvanised C-section purlins as feed troughs, arranged in single-line, tek-screwed to purlin offcuts to raise the purlins off the ground.

Nigel said their ewes in containment were fed 600g/head/day of barley seven days a week. On a per head per week basis, the rations totalled 4.2kg and cost $1.70, with all the barley bought in.

“The ewes went into containment feeding with an average body condition score of 3.2 and we held them at that condition score. When we got a month away from joining, which happens in November, we increased the ration to 5.2kg/week and also included 10% lupins,” Nigel said.

“Those ewes were perfectly set up to get back in lamb again at a high foetus rate. I expect to scan 160% of foetuses out of those ewes when we scan in February, and that sets up next year’s income.”

Lambs were fed a barley-lupin mix ad lib in self-feeders, consuming 3% of their body weight in feed each day.

“We had the most amazing results with weight gains, considering they were only 12–17kg at weaning, averaging 300g/day,” Nigel said.

“One of the big things we noticed was our lambs and ewes were happy. You would see the lambs playing and contented and you knew they were doing well because they weren’t walking the fences.

“That weight gain set them up for life and those lambs are now set up to go into reproduction mode – we join at seven months of age with our Merinos.

“Because we were feeding in purlins and the feed wasn’t going on the ground, we didn’t have any animal health issues.

“We added Beachport Green Cap supplement to the water, which has trace elements including magnesium, so it chilled them out, and we made sure the water troughs were cleaned every day.”

Nigel said Kerin Poll literally cut its feed bill in half the day they weaned and started containment feeding.

“The reason is, it’s difficult to keep a lamb going in a severe drought while you’re feeding them with their mums.

“Before we started containment feeding, we were feeding 14kg of barley per ewe, per week. The ewes were mud-fat, but the lambs looked terrible, because the ewes were eating most of the grain,” he said.

When the Kerins weaned those lambs, brought them into containment and started to treat them at weight ranges, they bloomed.

“By going into containment early, the ewes were fat anyway, but it allowed us to look after the next generation – we couldn’t do that by trail feeding out in the paddock,” Nigel said.

“Another advantage of containment feeding is that after they had been in the swing of things for about two weeks and knew what the routine was, once they had been fed in the morning, they would go and sit down in the camp and rest.

“If I had them in a small paddock of say 15ha, those sheep would have walked and walked all day, burning off what they had eaten. It’s 15% more efficient to be in containment than out in the paddock.” 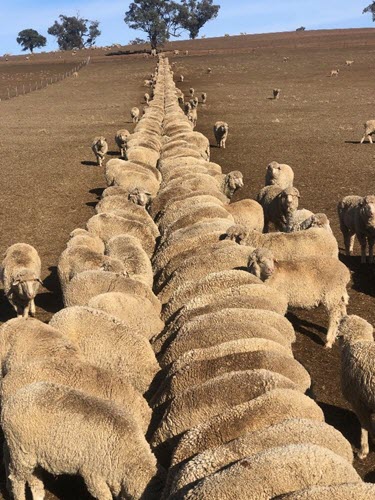 The Kerin family’s Poll Merinos in containment feeding in 2019.

An unexpected – though very welcome – outcome of containment feeding at Kerin Poll has been a boost to the mindset and outlook of everyone in the business.

“You actually feel happy about proactively managing your ecology and your resources,” Nigel said.

“The headspace part is important – it’s great to feel in control when you’re doing containment feeding and know you’re not destroying your greatest assets, which are your landscape and animals.”

Nigel said containment feeding is very different to normal trail feeding in a drought. Not only have they maintained groundcover, but they’ve also maintained the weight and health of the sheep.

“It means the day it rains, our doors are open for business because we haven’t lost the ‘perenniality’ of our pastures or the humus layer off the country.

“Once you build your grass bank, you’ve got to maintain it. We were down to probably 700kg dry matter per hectare when we decided to do containment feeding.”

The Kerins use grazing charts to match stocking rates to carrying capacity, as well as grass budgets every month. Nigel said that with this climate, the new line in the sand is going to be 1,000kg of dry matter per hectare.

“We see no benefit now coming below 1,000kg DM/ha, because once you’re below that, you’re starting to eat into the amount of groundcover, which impacts water use efficiency which enables you to manage and hold these massive one-off rainfall events that are increasingly happening.

“I know this buffer will create more resilience and wealth in the landscape and animal production.”