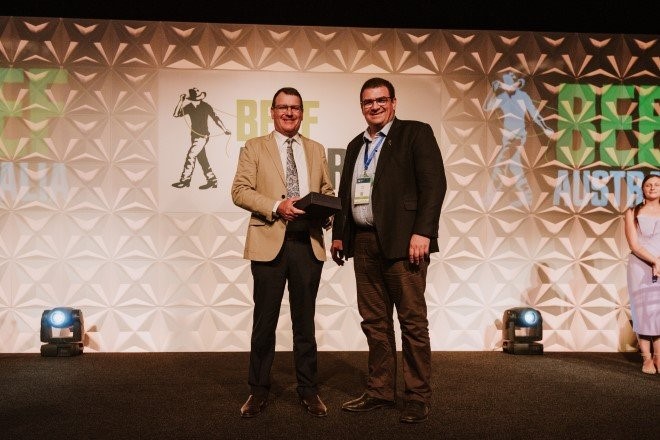 “Red meat producers are at the forefront of driving this innovation, on-farm and through the supply chain – and this award is an opportunity to recognise some of the best of our industry.

“Bill has not only developed a new innovation but has turned this into a new product and brand and established a start-up business in regional Australia to support this.”

Armidale Producer Bill Mitchell – who was joined at the Awards dinner by wife Jacqui - said he was looking for a system that could provide real-time data on the performance of their cattle by assessing weight gain, which was their inspiration to develop the Optiweigh system.

“Our operation is focused on meeting target weights for target markets, which is why assessing weight gain was so critical,” Mr Mitchell said.

“Having the unit in the paddock feeding data to us means we can assess our cattle every day, delivering up to $70 more per head going out the gate on every truckload because we are better meeting sale specifications and avoiding overweight penalties.

“The constant weight updates also help to monitor paddock condition so you can rotate your stock at the right times, rather than waiting until they’ve started going backwards.”

Optiweigh has now been successfully commercialised, with over 90 units deployed on beef farms across Australia.