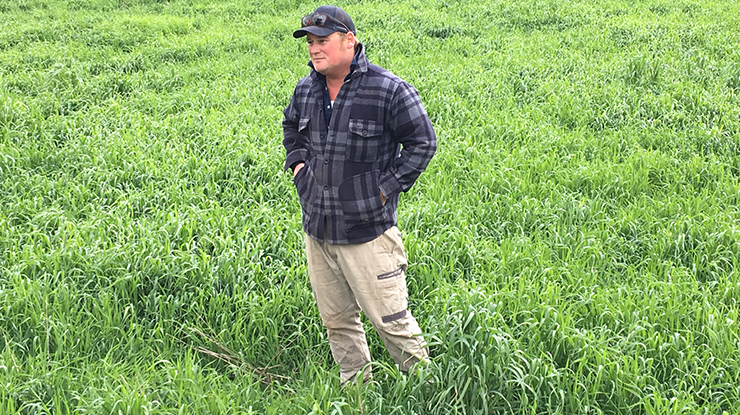 Changing an enterprise is a big decision to make, but NSW beef producer Michael Shannon has taken on new challenges, backed by advice and research.

The Shannons’ property at Cathcart in the Monaro region has evolved over time.

In the past, major changes included replacing the stud Hereford herd with Angus and Hicks Australian Beef Composite/Angus cattle, chosen for their better returns and hybrid vigour, and introducing sheep to the business.

However, in the past five years, Michael has made some major management decisions with the support of consultants and modelling systems to put his business on a more productive, profitable and sustainable path.

In 2016, Michael made the decision to sell off the flock, to streamline management.

The region’s high rainfall and mild summers contributed to a significant burden of Barber’s pole worm in the flock, with some lambs receiving up to nine drenches before they were sold.

“When you factor in the labour and costs involved in keeping up with animal health requirements like these, and the difficulties in meeting market specifications, it meant we weren’t getting anything else done,” Michael said.

He crunched the numbers and decided to move out of sheep – which the family had produced for 30 years – while the market was strong.

It proved to be the right decision for their business and has removed a lot of stress.

Despite setbacks from recent droughts and fires, Michael said the farm had benefited from the additional time they now had to work on the business, rather than in it. Streamlining their enterprise has also improved grazing management.

“We’ll still run a few sheep again when there’s an opportunity in the market, but for us, beef is the game now,” Michael said.

Michael’s focus on production economics to improve the profitability of each animal and hectare has seen him move away from the region’s traditional model of turning‑off cattle as weaners.

He’s participating in an MLA Producer Demonstration Site (PDS) which highlighted the profit potential of taking weaners through to yearlings.

“What we've found is that by taking an animal from the traditional weaner weight of around 200kg up to 350kg, we have far more opportunities beyond the farm gate and more bang for our buck,” Michael said.

“If we can get through winter holding our weaners, we sustain higher DSE (dry sheep equivalent) per hectare and make better use of the spring flush.”

He grazes weaners on fodder crops such as canola/wheat, which are delivering 1–1.4kg/head/day weight gains compared to 0.4–0.6kg/ head/day on pastures.

“We’ve now got the chance to watch the market and identify profitable times to make a play at selling heavier or lighter animals, rather than just selling off weaners like we used to,” Michael said.

“From the PDS, we’ve been able to identify what works and what doesn’t with our fodder crops and our animal management.”

An important strategy has been weaning calves into containment, so winter fodder crops can reach a minimum of 3,500kg dry matter/ha.

“Depending on the season this may only be for a month, but in 2020 we fed them in containment for five months, to ensure we’re extracting the most weight per mouthful of feed when they do go on the crops.”

Michael said the tough management calls made in recent years to maximise production have been supported by agriculturalist and advisor Doug Alcock, who is also providing technical support to the PDS project.

“Doug came on board as an advisor when we were initially moving away from sheep, and has been with us since,” Michael said.

“He’s been a big help with what we’ve done here the last few years, modelling our business using GrassGro™ to provide us with information we can cross‑check with our own records to make the right calls on changing our enterprise.

“Out of this we’ve been able to identify important data like the best stocking rates for us, both in the finishing system and across the property, with a rough increase of 25% in our stocking capacity, joining times for the right calving period and when to wean.

“Although we haven’t been able to completely proof the system due to drought and fires, we’re confident we’re on the best path through the strategic changes we’ve made.”