New research into the impact of deworming feedlot cattle has found an average 4kg hot carcase weight advantage for treating cattle with a dewormer, compared to no treatment.

Funded by MLA in consultation with the Australian Lot Feeders’ Association (ALFA), this research project was led by Bovine Dynamics in collaboration with internationally renowned parasitologist, Dr Andrew Kotze from CSIRO.

The project evaluated the efficacy of six different deworming treatments to determine:

Dr Melissa George from Bovine Dynamics said the cattle involved in the study at a south-east Queensland feedlot had a mean faecal egg count at induction of 85 eggs per gram, which is considered a mild infection.

“We completed six pen replicates with a total of 1,434 steers. There were 40 head per pen per treatment and the cattle were fed for 100 days,” Dr George said.

The steers were sourced from central and south-east Queensland and NSW, had an average induction weight of 404kg, gained 2.1 kg per day, and had exit weights of 622kg.

“We expected Cooperia to be the most common parasite and it was,” Dr George said.

“Haemonchus can be a highly pathogenic parasite in sheep. If we were unable to control that parasite because of resistance, that could lead to more problems in cattle.

“We found all other treatments to be highly effective.”

Dr George said even though there was a low level of resistance to injectable doramectin, it did not impact average daily weight gains or hot carcase weights.

“Using any of the dewormers we tested, the treated cattle had a 4kg hot carcase weight advantage over non-treated cattle,” Dr George said.

See Figure 1 below for the effect of deworming on feedlot cattle hot carcase weights. 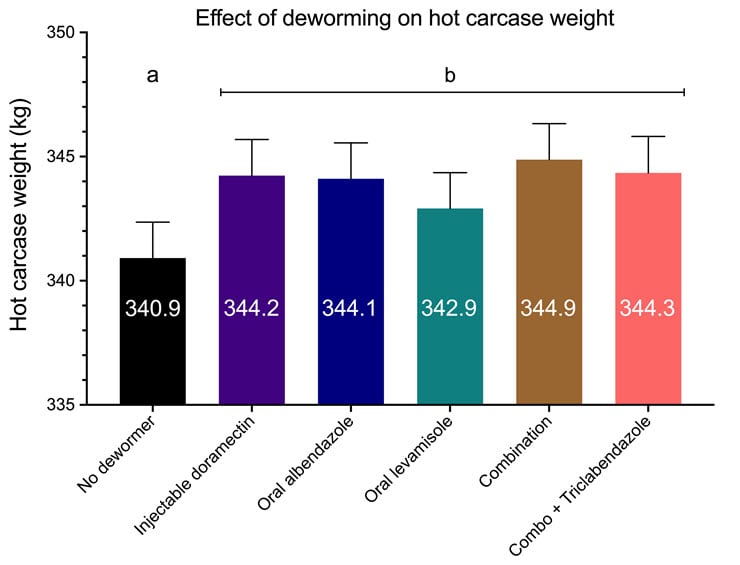 According to the results, there was no impact on marbling or meat colour. “Deworming also resulted in a 0.05 kg average daily gain advantage,” Dr George said.

Dr George said there was a minimal level of liver fluke in the study as the majority of cattle came from non-fluke endemic regions.

“In the group treated with triclabendazole, we had no flukes present. We went to the abattoir and did liver scores and in that group there were no flukes present at slaughter,” Dr George said.

She said the project clearly demonstrated the benefits of deworming.

“This study identified Cooperia and Haemonchus were resistant to injectable doramectin, and although the level of resistance in the study didn’t impact productivity at the feedlot, it does warrant consideration by lot feeders to use combination treatments if they wish to achieve full efficacy,” Dr George said.

“Using treatment combinations really is the best strategy to ensure you have efficacy against parasites with different resistance profiles. However, this study showed no economic advantage to combination treatment over any of the single-active dewormers tested.”