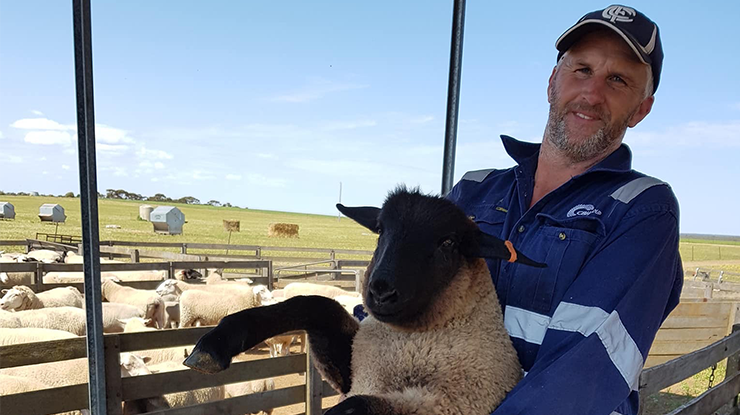 Peter and Rochell Walker have been using electronic identification (eID) in their stud flocks for the past four years, dramatically reducing labour costs and saving $11 for every dollar invested.

The Walkers’ operation has doubled in size over the past decade, placing increasing pressure on available labour.

In 2015, they invested in eID for their stud sheep and now use the technology to:

They also use eID to record their ewes’ pregnancy status (empty, singles or twins) and foetal age (early, mid and late‑lambing), which assists with selection, feed allocation and mob‑management decisions.

An economic analysis of their initial $11,000 investment in eID (as part of a WA Department of Primary Industry and Regional Development project) showed the Walkers are on track to save $118,000 over 10 years, with every dollar invested returning $11 in savings.

Before using eID, it took the Walkers 380 hours a year to manually collect, enter and analyse stud sheep data. With eID, this was reduced to just 36 hours a year.

Lambs were visually identified to their dams to determine lineage, then weighed within one month of birth, plus another three times before hitting 60kg, and were also muscle scanned.

Because lambing coincides with seeding, this data collection placed pressure on the Walkers.

“We were at the point where we either stopped doing it altogether or we had to find a way to do it more efficiently,” Peter said.

They started by moving lambing to July and August, then engaged a consultant to help them choose the right eID equipment and software system for their operation.

“Electronic recording means there are fewer errors and less stress when we’re recording data at the yards,” he said.

“My father Syd really enjoys being involved in the stud but, like most 74‑year‑old former grain farmers, he’s a bit hard of hearing.

“By using the eID wand, he’s making a valuable contribution, but doesn’t have to wrestle sheep to read a tag or worry about mishearing a tag number.

“It’s also given me more time to spend with my family and do other farm jobs.”

As Peter’s business is 80% cropping, he said the economics don’t yet stack up to expand eID to his commercial flock: “It’s a different story for farmers concentrating on livestock production.”