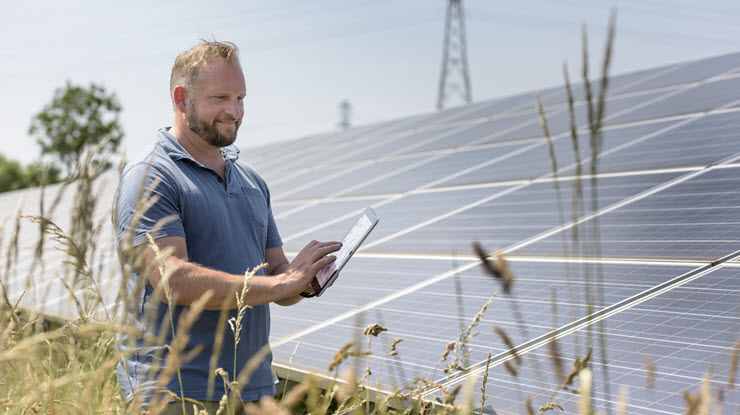 Energy prices are increasing at a faster rate than the Consumer Price Index, making it a significant and rising cost for all operations along beef and lamb supply chains – but another concern for producers is having the time and the know-how to weigh up the most energy-efficient options for their business.

Engineering firm All Energy Pty Ltd has teamed up with MLA Donor Company (MDC) to create myenergy.tech, a free digital tool that makes it easy to understand the costs and benefits of renewable, energy-saving technologies for farms, feedlots, and processors.

Not only is the online Energy Cost Saver about saving operating costs, it delivers improved energy security and reduced emissions, tying in perfectly with the red meat industry’s target to be carbon neutral by 2030.

Launched in April 2019, the tool provides indicative numbers in seconds with minimal input from users. Pre-built scenarios for typical facilities have already been loaded, but producers can input their own numbers to tailor the scenarios and technologies to their operation.

Principal Engineer at All Energy, Gareth Forde, said the two big opportunities for producers were in photovoltaic (PV) solar pumping, rather than using a diesel or electric pump, and electric farm vehicles, such as All Terrain Vehicles (ATVs) and quad bikes.

“Even cheap off-peak farm pumping can cost over 22c per kilowatt hour (kWh), which doesn’t include access and demand charges. PV solar continues to become cheaper and cheaper, as low as 4 cents/kWh over the first 10 years of operation.”

Gareth said the rapidly dropping costs of PV solar, coupled with the inability to export to the grid or low reimbursement from the grid, means farms are looking for what to do with excess PV solar.

“Charging electric farm vehicles can provide a high-value use for that excess PV solar power while reducing the cost and inconvenience of refuelling,” he said.

For simplicity, the tool assumes a flat 6c/kWh cost for power from PV solar for charging electric farm vehicles, based on a roof mounted, northward facing system of <99 kW, which can attract Small-scale Generation Certificates (STCs) upfront to reduce initial system costs.

The tool has pre-loaded scenarios for typical operations presented as the default, hence producers can enter no data at all and get a feel for the cost outlay and payback for the most viable options.

“However, people can also enter data for their specific facility, such as current pump kW ratings and hours of pumping per day, current power source or cost per kWh,” Gareth said.

“For farm vehicles, you might enter kilometres per day travelled, the vehicle type and your fuel price in dollars per litre.”

MLA’s Doug McNicholl, Manager of Supply Chain Sustainability Innovation, said while energy consumption and cost is a key operational issue impacting industry competitiveness, fossil fuel use contributes to the carbon footprint of industry, so reducing fossil fuel use is an important part of industry’s aspiration to be carbon neutral by 2030.

“By industry investing in their own sources of energy, they’re taking control of energy costs and availability and insulating themselves from energy price rises and potential supply issues,” he said.

The ins and outs of energy usage

Gareth said one aim of the tool is for people to become more ‘energy literate’.

“By that I mean, you probably know how many dollars you pay per litre of fuel, but how much are you paying for your power in cents per kWh?” he said.

“Do you know your additional access and demand charges for grid power or the maintenance costs for diesel generators? For feedlots and processors, do you know how many dollars you are paying per gigajoule for boiler fuel and what the cheaper options are? The myenergy.tech website gives you a starting point for this information.”

Gareth explained that Australian liquid fuel prices, such as petrol, diesel, LPG and LNG, are tied to global markets and have an unpredictable but increasing trend. Currently more than 90% of liquid fuel is imported. As soon as 2030, Australia could be effectively importing all of its petrol, diesel and LPG.

All Energy works with Australian businesses on solutions for lower-cost electricity and thermal energy. Having worked with a large number of businesses across the red meat supply chain, All Energy identified a knowledge gap in the area of energy.

“There’s a staunch commitment to core business, resulting in limited time being available for people to understand the energy they consume, the options that are out there and what it all means for them,” Gareth explained.

“The historical convenience of liquid and gaseous fuels and grid power has resulted in businesses now paying much higher energy costs than they need to. This tool does not give definitive costs for everyone in every situation, but provides indicative numbers for key options.”