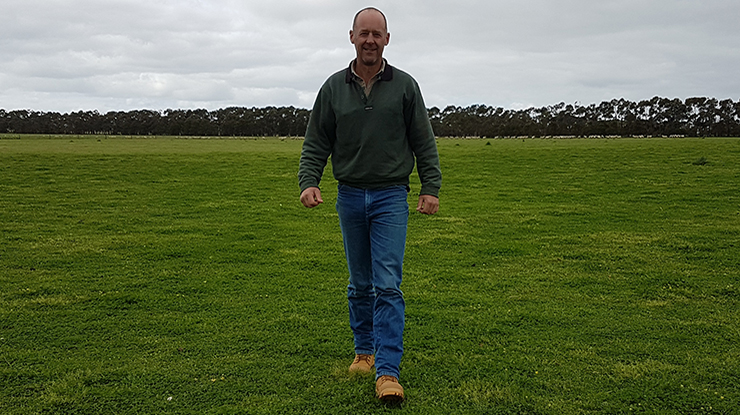 Keeping on top of weeds is a key challenge faced by Murnong Farming across its three studs, but by implementing these simple strategies, feedbase management is now easier and more productive.

The weeds of most concern on Murnong include capeweed, corkscrew (erodium), barley grass, silver grass and soft brome grass. The management of annual weeds is a key focus across the three sheep studs.

“Increasing the productive performance of our perennial pastures directly affects how well our animals meet their genetic potential – and being a stud, that’s pretty important,” Josh said.

“We put up with a few weeds as long as we can control them, and they don't break us economically – there are weeds that are good value for sheep feed.”

Without having access to big mob sizes and the need to keep the three sheep management groups separate, Josh recognised early on that the best way to try and control weeds by grazing was to reduce paddock size from 30+ha down to 10ha.

“I think that's given us more options – it's easier to remove 10ha from the system to manage the weeds than it is to remove 30ha,” Josh said.

“In those bigger paddocks, sheep can graze selectively, so the weeds can take full advantage.”

Producer group organisation Southern Farming Systems set up a spray grazing demonstration at Murnong Farming on a paddock dominated by capeweed and barley grass, inspiring Josh to give spray grazing a go himself.

“We were going to knock down that pasture, put in a summer crop and start again, but the demonstration made us really look hard into managing our pastures differently,” Josh said.

Applying Agritone 750 at a rate of 500ml/ha to a 9ha paddock at the end of July, Josh was encouraged by the results of his spray grazing trial.

The paddock was stocked with 220 ewes and 312 recently-marked lambs 13 days after herbicide application to remove all the capeweed leaf. The lambs gained 410g/head/day over a 21-day period, and the ewes maintained condition score 3, while no scouring or illness was observed.

At the start of Josh’s spray grazing trial, there was a marginal presence of the original sub and white clover base that had been sown three years prior – but by the end of October, the clover had recovered fully and was setting seed.

Josh has reaped the benefits year-on-year, with the sub-clover now comprising the majority of the feedbase.

"We learnt that we don't need to go and start again and waste a whole heap of money."

Josh is now fine-tuning the timing of spray grazing, applying the technique opportunistically when the autumn breaks are early and clover has grown three leaves. The grazing component of spray grazing is easier to achieve when you’re starting with less feed on offer and smaller weeds.

Josh will also strengthen the pasture by introducing a perennial grass in autumn, rather than attempting to over sow in a summer crop when it is bare in spring after spray grazing, as Josh has found the clover is too strong and wouldn’t allow the crop to establish.

In spring, Josh uses three techniques to control seed set, including grazing, spray topping or mowing. He finds these techniques work effectively together to control the seed issues in animals.

“We wean 1,000 ewe lambs by November, so we've got big mobs that we use to graze down excessive dry matter – although that's got to be combined with another technique, because if there's too much choice, they just pick through it and leave all the weeds.

“As a result, we also use either spray topping to reduce the weed burden of brome grass, or over summer, we mowed a lot of perennial pastures, about 40–50ha.”

Mowing pastures has multiple benefits, according to Josh.

The permanent pasture across the studs is Holdfast GT phalaris or perennial ryegrass, with a good base of sub-clover. The remaining balance is either lucerne or plantain.

The farm with smaller paddocks now allows rotational grazing with bigger mobs up until lambing and this is encouraging growth of the perennial grasses. Set stocking during lambing helps maintain sub-clover content.

The final lesson Josh has learnt along the way has been around being adaptive and even opportunistic in his weed management.