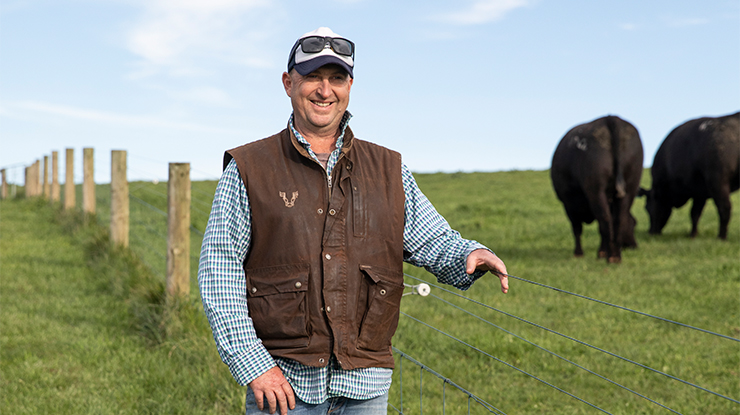 Victorian cattle producers Olivia and Tom Lawson, Paringa Livestock, have their sights set on a recipe to improve productivity and carbon neutrality.

For the past nine years, Paringa Livestock has bought industry‑leading Australian and US genetics, which are tested for feed efficiency.

Tom Lawson said such genetics deliver emissions reductions via faster turn‑off (which means animals emit less methane in their lifetime) while lifting reproductive outcomes, such as weaning rates and weights.

Tom and Olivia use the Stabilizer® planned crossbreeding and additive selection system, which can potentially produce 20% more beef per hectare and reduce carbon impact (as reduced carbon dioxide equivalent emissions) by 38%.

They’ve also focused on carbon storage and reducing emissions for more than 10 years through a vegetation improvement program.

Expansion is constrained in an area with high productivity and land values, so they’ve had to think strategically about planting areas. Strategies include:

These tree plantings contribute to stored carbon on Olivia and Tom’s properties, as well as providing benefits such as shade and shelter for livestock, which supports productivity.

Tom and Olivia wanted to dig deeper into exactly what makes a difference when calculating a beef enterprise’s carbon account.

So, Olivia joined more than 50 other producers in MLA’s pilot carbon accounting workshops in 2020, which gave her a handle on where their enterprise stood.

“I’ve been looking into carbon accounting in more detail in the past 18 months and we’re keen to support the industry goal of achieving carbon neutrality,” Olivia said.

These workshops guided producers through the process of determining their net greenhouse gas position as the first step to identify how to achieve a carbon neutral livestock enterprise.

Olivia and Tom both have agricultural science degrees and Olivia recently started a diploma in sustainable agriculture – providing a useful background as they head towards carbon neutrality.

They believe that while carbon neutrality is achievable across their whole enterprise, it won’t be easy.

Portions of their land are leased, which requires lessee and lessor agreement on financing any large investments in improvements like revegetation and permanent fencing.

Another challenge is accounting for the mixed vegetation species they have planted, which includes permanent stands of eucalypts, stringy barks, peppermint gums, yellow box, blackwoods and wattles.

“Mixed native species have increased our biodiversity, which we value,” Olivia said.

However, the carbon accounting tool used in the MLA pilot workshop currently only enables inputs of single species: softwood or hardwood. This means that tree carbon sequestration estimates in Olivia and Tom’s account may be under or overestimated.

The primary driver of the pilot workshops was to undertake market research on the carbon accounting process to inform refinement and upgrades.

Since Olivia participated, MLA and the research organisations involved have already invested in improving the carbon accounting tool used in the workshop.

One of the major improvements was combining the sheep and beef tools, which eases the carbon accounting process for mixed production systems. Future improvements are planned to include input options for more regionally diverse, mixed and single‑tree species. This will enable a more accurate estimate of carbon stored in vegetation.

Tom and Olivia are also improving their carbon outcomes in other areas:

“Implementing a well‑managed crossbreeding program is the simplest and lowest‑cost way to increase efficiency and weight for age,” Olivia said.

Paringa Livestock measures, monitors and benchmarks its genetic progress through Australia’s BREEDPLAN and the global $Profit® database, which compares purebred and multi‑breed genetics around the world.

For example, Angus Australia includes an estimated breeding value for net feed efficiency in BREEDPLAN, which Tom and Olivia use to measure cattle for feed efficiency gains.

Angus Australia collected data on the net feed intake trait from thousands of progeny through the Angus Sire Benchmarking Program, which was supported by MLA. This information is available to producers.

Tom and Olivia also seek out genetics from around the globe ranked highly for $Profit® traits such as feed to gain and intake.

When Tom and Olivia first measured their agronomic soil carbon 10 years ago it was at 2% – two years later it was at 4%.

Olivia suspects their soil carbon may have doubled again due to actions such as:

Cattle are managed in large mobs based on year groups in a rotational grazing system of high intensity intervals to maximise year‑round ground cover.

Olivia and Tom aim to continue to make soil carbon gains by reducing paddock size and increasing the intensity of rotations.

Conducting baseline measurements can be expensive, so MLA continues to invest in research aimed at reducing soil carbon measurement costs.