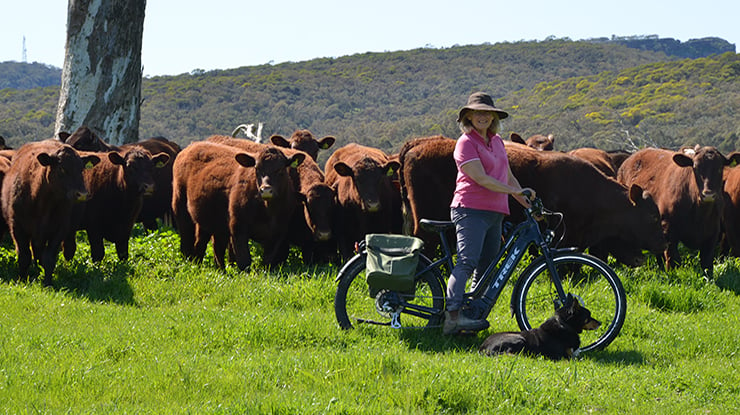 Moving cattle every day or so on ‘Eurimbla’, the property she runs with her husband, Ian, at Gerogery in southern NSW is almost a meditative experience for Jill Coghlan.

Using her electric bike, Jill quietly moves the cattle on as part of their tight rotational grazing system, which sees the entire property grazed in a six to eight-week cycle.

The Coghlans have worked to improve environmental outcomes for almost 40 years and while the work never stops, Jill and Ian say they are now seeing the benefits of increased plant and animal biodiversity and focusing on soil health.

This year, through a project facilitated by the Holbrook Landcare Group and Landcare Farming Australia, they’ve been measuring and calculating their carbon emissions and soil carbon levels.

Jill’s optimistic it is not too much of a reach to achieve a carbon positive status and suggests it will come from fine-tuning the management of three key areas:

An important influencer on these three areas is the humble dung beetle.

What the dung beetle delivers

At Eurimbla, dung beetles are responsible for supporting better animal health and more rapidly growing livestock by quickly disposing of dung and creating a healthier grazing environment. They improve soil biota through dung burial and deliver nutrients more deeply to create a soil which holds moisture and an environment where a range of plant and animal species can thrive.

After first identifying Bubas bison dung beetles on their property in 2013, Jill and Ian set about to facilitate the build-up of a local population. In the last few years, the Coghlans have also teamed up with researchers from the national Dung Beetle Ecosystem Engineers (DBEE) project, identifying three additional beetle species (Digitonthophagus gazella, Onthophagus taurus and Aphodius fimetarius) on Eurimbla. “The cattle seem much healthier. Removing the dung also helps break down that worm cycle. And it's reducing bacterial diseases, such as scours or mastitis,” Jill said.

The Coghlans have attributed the combination of the short grazing rotations and good soil health, driven by dung beetles, to their reduced reliance on fertiliser.

“We’re currently in the process of assessing the longer-term impact of dung beetles on soil structural changes and carbon sequestration”, Professor Weston said.

“We predict that increased dung burial by dung beetles will have a net positive impact on soil carbon status and eventually lead to carbon sequestration - the long-term storage of carbon in soils.”

“As carbon is assimilated by plants through photosynthesis, plant-based carbon is transformed into animal dung, and eventually incorporated into the soil by organic matter deposition.  This process slowly builds more productive and fertile soils, while allowing for improved water holding capacity as well”.

While the project is now performing research to evaluate and quantify the impact of dung beetle activity on soil carbon and accumulation of organic matter in local soils, researchers and producers like Jill and Ian hope to one day see most farms across the country benefiting from the unassuming beetle.

“We want producers to think of their farms as active dung beetle nurseries, where species can easily gather, reproduce and spread onto neighbouring properties,” Professor Weston said.

“We’re only now developing an understanding of what ecosystem services dung beetles are capable of offering to the agricultural sector, but the future looks bright.”