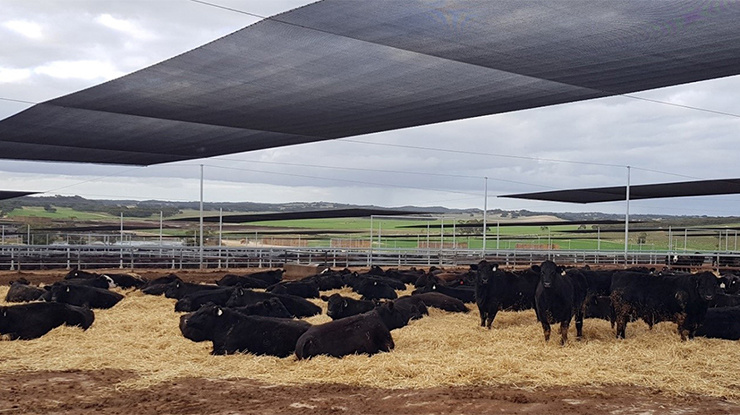 Cattle under the shade structures at Iranda Beef Feedlot.

Improved animal welfare and increased feed consumption during summer are among the many benefits shade structures have delivered for Iranda, one of southern Australia’s largest feedlots.

Thomas Foods International’s Iranda Beef Feedlot at Tintinara, SA, now has shade across 90% of the 17,500 head feedlot, with plans to expand shade to remaining pens.

The state-of-the-art EU-accredited feedlot was designed with animal welfare in mind, so installing shade was a priority.

“We typically have hot dry summers and cold wet winters. However, we have had days in excess of 45°C here and a heat load event we experienced in 2017 really cemented our decision to install the shade,” Thomas said.

“We recognised the need to incorporate shade from an animal welfare, productivity and profitability point of view. Looking ahead, we’re planning an extensive expansion in the next 24 months and including shade in the design is a priority.

“I think with how extreme and variable the climate is everywhere now, no one is really safe from impacts such as heat load events.”

Iranda used 70% block-out shade cloth (3.2m2/head) installed in a north-south orientation as recommended in the manual. The orientation allows the shade to move through the pen, which is particularly important in southern Australia.

“With our wetter, colder winters, we can’t dry the pens out like lot feeders on the Downs in winter,” Thomas said.

“The shade is offset from the water trough and not covering the feed bunk, which are two really important factors for our site.”

“Having shade over the feed bunks would mean cattle would obviously make their preferred spot in summer in the shade and they would camp along the bunk and foul it up with faeces and hair. They would also block other cattle from eating, resulting in uneven eating patterns.”

Get the height right

“The height of the shade is also a key consideration. Ours is 6.5m high because it matches the equipment we use for pen cleaning,” Thomas said.

“We can load a 30-tonne articulated dump truck with a 15-tonne excavator, which is our preferred pen cleaning method. The height also allows better air flow.”

When constructing shade over an existing feedlot using shade cloth, Thomas said lot feeders should be mindful of the need to install cabling and stay systems at the end of each row.

“There are a lot of options and that’s where corrugated iron is a lot neater because you don’t have to worry about stays,” Thomas said.

“We’ve got one row in the feedlot that’s still not covered, and we’re considering putting galvanised iron sheet shade over it. A downside of iron sheeting shade though is when it rains, the rain sheets of the iron and can impact the pen surface.

“Shade cloth is good because it somewhat protects pen surfaces and breaks the rain to make it more fine so you don’t get any sheeting off it.

“We also don’t have any posts in the pens at all, so you don’t have to work around the posts and the cattle can remain in the pens while shade is being installed.”

The shade has resulted in improved animal welfare benefits, leading to increased productivity at Iranda.

“It’s all anecdotal to date but we have definitely seen the benefits of the shade on feeding through summer,” Thomas said.

“Consumption and consistency of consumption have increased significantly, and we can really see the differences between shaded and unshaded pens.”

“We see a much more dramatic reduction in feed consumption and the period of recovery is so much longer in the unshaded pens.

“Once a steer or group misses that consumption, they never really get it back. That’s lost performance and potential of those cattle.

“In winter, there are no negative effects of the shade, as the cattle still gather under it, even when it’s 15°C.”