Lamb finishing: is it worth it? 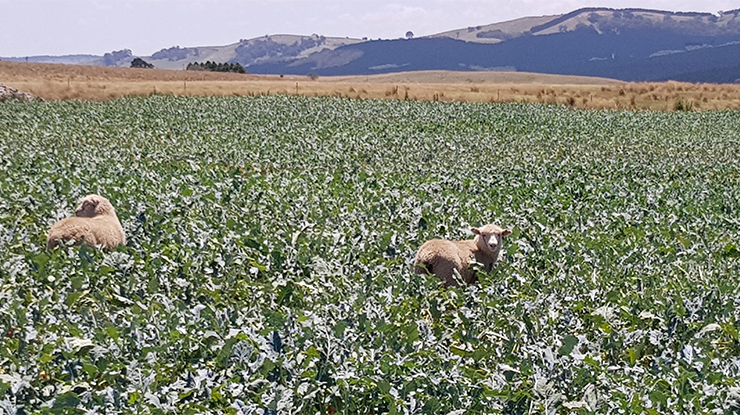 High-performance forage crop and perennial pasture systems were put to the test in NSW’s Monaro region in an MLA-funded Producer Demonstration Site (PDS) to see how finishing lambs stacked up compared to the traditional store lamb system.

The result was a tick for farm profitability, with average net profits from establishing and finishing lambs on the pasture/crops ranging from $305/ha to $1,492/ha over the two years of the PDS, despite poor seasonal conditions in the second year.

In comparison, the region’s traditional system of turning lambs off as stores by the end of December, at average sale weight of 29kg had an average total enterprise gross margin of $161/ha.

It followed an earlier project by Doug and the group, where they used GrassGro modelling software to quantify the benefits of finishing lambs.

It reflects changing enterprises in the region, which is traditionally a Merino grazing area.

“In the last decade, as wool prices waned in relation to sheepmeat prices, there’s been a lot of opportunistic joining to terminal sires or Border Leicesters,” Doug said.

“The vast majority of those animals end up in the store market, unfinished.”

“The modelling showed that in nine out of 10 years you’re going to be significantly better off, economically, by finishing lambs on specialised pastures,” John said.

The PDS was aimed at giving producers confidence these modelled figures could be replicated in real-life.

The PDS involved 10 paddocks on host properties with pastures and crops in the original modelling:

All paddocks were grazed with weaned crossbred lambs, with 50 in each mob eID tagged as a monitor group for weighing.

Takeaway messages for producers from the PDS include:

“As the PDS wasn’t conducted under strict pasture trial conditions, the systems cannot be directly compared to each other,” Doug said.

“However, the results indicate producers on the Monaro should feel confident in the reliability of increased profit from lamb finishing, regardless of the pasture/crop system chosen.”