Leucaena for the long-run 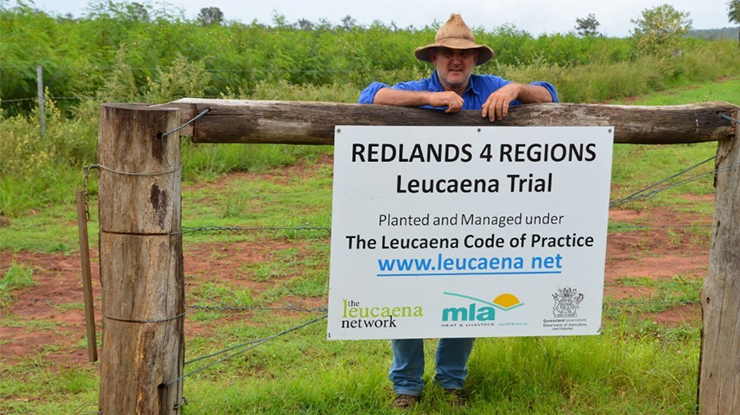 Brett Blennerhasset took part in the 'Redlands for Regions' initiative as part of MLA's Producer Innovation Fast-Track program and is already starting to see the benefits of the psyllid-resistant leucaena variety.

North Queensland beef producers Brett and Theresa Blennerhasset’s measured approach to managing leucaena is paying dividends, as they believe it will allow them to hit target weights 6–12 months sooner than if they relied on pastures alone.

They first planted leucaena in 2008, but issues with psyllids in their Cunningham variety sent them searching for a variety more tolerant to the pests.

In 2018, Brett and Theresa took part in the ‘Redlands for Regions’ initiative as part of MLA’s Producer Innovation Fast-Track program. The initiative was managed by The Leucaena Network and set out to increase adoption of the new Redlands variety of leucaena.

Planting Redlands has reduced the turn-off time of Brett and Theresa’s live export and feeder cattle by 6–12 months, boosting productivity of their property, ‘Goshen Station’.

During their many years of growing leucaena, the Blennerhassets have learnt valuable lessons in establishing and maintaining the legume to improve their operation and gain resilience in difficult seasons.

Brett said understanding how different varieties of leucaena perform in different environments is critical for its success.

“Be aware of your land types and climate,” he said.

“Understanding your land helps when choosing the right variety of leucaena for your operation and managing it accordingly.”

A successful and highly productive leucaena stand is dependent on how the paddock is assessed and prepared.

“Cultivate 6–12 months in advance if you can to try and reduce the weed seedbed,” Brett said.

He said land which has lots of pre-existing legumes will present a challenge.

“You can’t spray for these legumes or you’ll kill your leucaena, so you have to cultivate and clean out your country before you begin.”

During the Producer Innovation Fast-Track program, Brett and Theresa prepared their soil with offset discs, ripping 400mm deep. They sowed 32ha of Redlands in 10m twin rows on a 1m spacing.

Brett said another important step to achieve productive leucaena is to prioritise management.

For example, cultivating strips prior to planting can create opportunity for weeds. Weed pressure can also be a problem in areas where erosion necessitates the need for no-till planting.

“Regularly checking your leucaena and taking immediate action on any issues is really important to get the most out of it,” Brett said.

He said it’s also important to prioritise the management of invasive animals such as kangaroos on newly established leucaena, as early grazing can stunt plant growth.

“Keeping out feral animals and not grazing before it’s six feet high will ensure leucaena gets its taproot down and continues to grow.”

4. Optimise your own leucaena

Brett advises producers to be observant and take the necessary steps to get the most out of leucaena in their environment.

For example, the Blennerhassets originally planted leucaena at a depth of 35mm but later found optimum germination on their land occurred at 10–15mm.

“When you start to establish leucaena, you learn a lot about how to optimise your own country and what works depending on the climate and soils.”