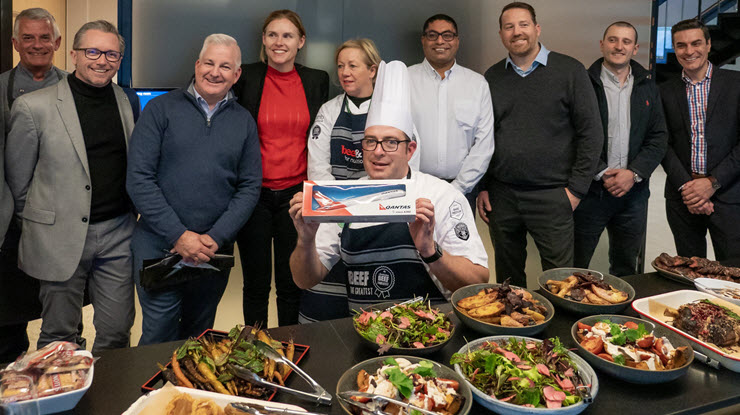 Inspiring new ways of using red meat on the menus of Australia’s largest airline was the focus of a recent workshop with Qantas, hosted by Meat & Livestock Australia (MLA) in Sydney.

Team members from across MLA met with Qantas culinary team executives and chefs from celebrity chef and restaurateur Neil Perry’s consulting team, who create menu ideas for Qantas as part of the renowned chef’s partnership with the airline.

“We highlighted our work across many parts of the business including traceability and biosecurity, livestock management, some of our research and development and marketing work, and talked about sustainability and the role we’re playing in the red meat industry’s target of being carbon neutral by 2030,” Graeme said.

“We also demonstrated the diversity of non-prime cuts to show that you don’t have to pay for premium cuts to get a great eating experience.

“There are a lot of logistical challenges to consider for in-flight catering. Menus are locked in nine months ahead of time, there isn’t a full working kitchen on-board and then there is the fact that we lose sensitivity to taste at altitude.

“Despite this, demand remains strong and red meat meals are a popular choice for Qantas passengers.

“A key challenge in keeping red meat on the menu is ensuring it is cost-effective and served in consistent portions. To help overcome that challenge, we talked about Meat Standards Australia (MSA) and the cut-by-cook method.

“MSA End User Training Facilitator Kelly Payne seamed out an MSA rump and MLA Corporate Butcher Doug Piper butchered a whole lamb carcase and they both went through a full range of cuts that perhaps hadn’t previously been considered, helping their cost of goods challenge.

“Looking ahead, Qantas and Neil Perry Consulting have created a cross functional working group to work with MLA on increasing the usage of red meat across all classes of travel.”

Graeme said MLA had a number of synergies with Qantas it hoped to work together on.

“There is the potential to partner on Qantas’ 100th birthday celebrations in 2020, and leverage Australian Beef and Qantas sponsorships of the 2020 Australian Olympic and Paralympic teams.