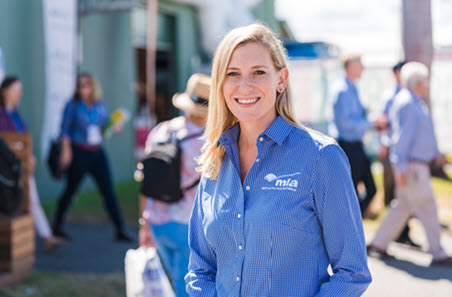 Six months after being appointed as MLA International Business Manager – Southern Asia, Ellen Rodgers, discusses the opportunities and challenges for Australian red meat and livestock in one of our most diverse export regions. Based in Singapore, Ellen’s region comprises the major markets of Singapore, Malaysia, Indonesia, Thailand, the Philippines, and Vietnam.

Q: What has been your focus in the first six months in the role?

A: I’ve been living in the region for four years, and have come from working in the wine industry. There are similarities but also obviously differences between the two industries. Understanding who the stakeholders and decision makers are in the red meat industry across the region has been a focus, and I’ve also been meeting and learning about the MLA teams I’m working with. We have a strong team in Indonesia, and great representation in Malaysia and Vietnam with plenty of experience in the region.

It’s an incredibly diverse region with a mix of religions, cultures, cuisines, and different levels of education. The governments and economies across the region are also very different - some economies are growing faster than others. While it’s a fragmented region, it also offers significant opportunity for the Australian red meat and livestock industry.

A: MLA is undertaking major research in South East Asia around attractive cities. MLA has looked at over 30 cities across the region and highlighted five main cities where the focus will be in the next five years. They include Singapore, Jakarta, Bangkok, Ho Chi Minh City and Kuala Lumpur.

We’ll be doing a deep dive into these five cities to further understand demographics, consumers and purchasing behaviours, why they’re buying red meat or what the barriers are. All of that information will be fed back to the industry and market strategies and programs will potentially be developed around those findings.

The cities are identified as attractive because of their demographics, rising incomes, population growth, and political stability – they’re attractive markets to be in and cities where economic growth is happening. Focusing on cities, rather than countries, allows a more targeted approach, because obviously some countries are very large and diverse, such as North and South Vietnam.

Q: Are there any emerging trends in terms of cuisine or cuts that the industry is or will be targeting?

A: In the past, a lot of processors have sent off-cuts and offal to South East Asia, however, there’s a lot more opportunity now to be selling premium product. That might be new product development, looking at trends such as the ageing population or opportunities within the snacking category. South East Asians snack a lot, and there are a lot of products available to them in that category. Red meat is not currently playing in the snacking category and this could be an opportunity for new product development.

There’s a huge emphasis of ‘premiumisation’ in the region because as consumers are earning more money and taking a more global outlook, they’re travelling and studying overseas, then coming back to their countries and demanding more premium products. Technology also allows them to see what’s available in the western world and they’re demanding more in terms of foodservice and western cuisine.

The other opportunity in the region in terms of trends is nutrition. Singapore has one of the highest incidences of diabetes among developed countries - by 2035, the prevalence of prediabetes among Singaporeans is expected to be one in four. It’s a huge issue and the Singapore government is declaring ‘War on Diabetes’ by putting $15 million towards developing lower sugar foods, sauces and beverages. I think it’s a significant opportunity to promote the nutritional benefits of red meat and educate consumers around healthy diets and lifestyles and tap into the wellness trend which is happening right across Southern Asia.

Q: What are the current challenges for Australian red meat and in the foreseeable future in the region?

A: There are always going to be challenges around market access in the region – from changes to Halal through to changing tariffs. Often, when a government changes, the laws change. MLA has a great deal of influence and we put a lot of time and effort into improving market access in Southern Asia.

I think there are challenges around influencing processors in Australia to ‘premiumise’ their products and look at other cut options. That’s a role for MLA to really inspire, influence and educate processors around what will work in this market and then making that successful by facilitating promotions with the retail and foodservice sector.

Indian buffalo meat is still entering the market in Indonesia, Malaysia and Vietnam and presenting challenges. However, for Australia, it’s about ensuring we’re producing products and strategies that help consumers move up the value chain. As they earn more money, they’ll be spending more on premium products, and educating consumers about Australian product is part of that.

The Indonesia-Australia Comprehensive Economic Partnership Agreement (IA-CEPA), which was recently finalised, will certainly benefit Australia. Indonesia is the largest economy in ASEAN and we’ve generally had a steady exporting relationship with Indonesia and the Agreement has reinforced that. MLA Managing Director Richard Norton was in Indonesia and met with all of the importers and we had some really positive and fruitful conversations with them around that Agreement.

Q: What is MLA’s focus for the next 12 months in the region to drive demand for Australian red meat?

A: You could do anything and everything and have a scattergun effect, but to make an impact you must have a focus and that’s why the five attractive cities that have been identified are going to be a major focus for us in building strategies around consumer opportunities. For me, putting the consumer first and understanding their demands and needs is the key to success in any market. Therefore, there will be a focus around the nutrition message, educating consumers on why Australian red meat is the best choice and moving them up the value chain.