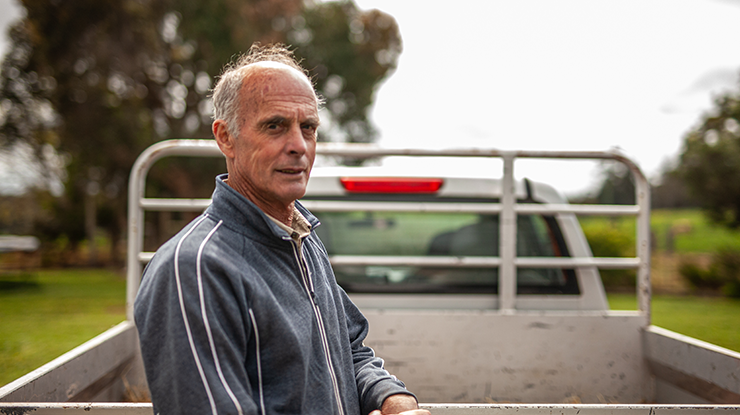 Having a target market for the beef they produce and a set of specifications to aim for are among the key advantages of being registered Meat Standards Australia (MSA) producers for Derek and Beth Dilkes.

Based at Dilkes Farm, Catterick, near Bridgetown in the South West region of Western Australia, the Dilkes have been MSA producers for the past 14 years, since they decided to lease out their dairy farm and diversify into beef cattle.

Their commitment to MSA saw Derek and Beth awarded the 2019 Most Outstanding MSA Producer Award for Band 2 producers in WA, based on their MSA compliance of 96.5% and average MSA Index of 67.21.

Derek is second generation of his family to operate the farm, and runs approximately 80 Angus breeders on a 120ha portion of the farm, rotationally grazing the cattle on improved pastures and feeding out their own hay.

“With a small herd, having all the one breed makes for a more even line.

“We calve the cows down in January so by the time winter comes along, the calves have all been marked and vaccinated and then our aim is to get them up to market weight at the end of spring and sell them.

“What gets to market weight at the end of spring we sell to local meat processors for MSA, and what doesn’t get up to weight we sell at the saleyards as weaners or stores.

“Our aim is to have all the calves off the farm by the end of the year, and to have at least 75% of our calves go for MSA grading and the balance go to weaners.

“We rely on our agents to inspect the cattle and determine if they’re up to the weight that the market requires.

“We select some of the better heifers for replacement breeders and then calve them down at two years of age.”

With an average annual rainfall of 700mm, the Dilkes grow their own hay and feed it out to the cattle for about seven months of the year.

“We’re cropping about 33ha with oats, ryegrass and clover, and grow our own hay,” Derek said.

“Just in the last couple of years we have been doing some over-sowing of pasture paddocks with oats and ryegrass as well just to help it along.

“We’re running a closed herd, so the animals get used to running as a mob. They stick together and I move among them a lot.

“I run hay over to them each day so I’m with them often.

“We keep them well fed all through the year. We rotate them through the paddocks so they’re always going on to fresh pasture. I just open the gate and call them, and they all move into the next paddock.

“We don’t spend time chasing them and we don’t use motorbikes or dogs, simply  because we don’t need to,  and when they’re in the yards, I just handle them very quietly.”

Derek said MSA has been a useful tool from both a marketing and management perspective in their beef cattle business.

“We’re small operators so for us it guarantees a place in the market and, to an extent, the price we get for our product,” Derek said.

“When we’re buying bulls, I look for temperament and conformation and animals that  move freely and are mobile.

“We turn the bulls over reasonably regularly too to keep them young and also the fact that we keep our own heifers, we need the new bulls coming on for the new heifers.”