This year, the theme of the day is ‘choose your #AgVenture’, where industry is encouraged to showcase the unique and exciting range of career opportunities on offer in the agricultural industry.

To display some of the incredible career pathways agriculture provides, we asked one of our very own – Bec Jennings, the editorial manager for MLA’s Feedback magazine – as well as producer, butcher and restaurateur Tim Burvill – to share their learnings from their careers in agriculture. Read on to see what they had to say about working in the industry.

I was raised on my family’s cattle property at Jackson, south-west Queensland, but now live near Jamestown in South Australia – I’m still getting used to the cold winters here! My husband David Moore and I are part of his family’s farming business – our children, Oscar and Hazel, are the seventh generation on this land. We produce dual-purpose Merinos, crops and also have a forestry component, however we’re returning some of this former government-owned plantation country back to grazing land. I work from home as editorial manager at MLA – I edit Feedback magazine. I’m fortunate to be able to live on the land but also have a career in the red meat industry.

What are the different roles you’ve held within the agricultural industry?

I studied journalism and early in my career worked at the Queensland Country Life as livestock editor, which gave me a ticket to travel to grazing businesses across Queensland and even into the NT, WA and NSW – it was such an interesting job. I also worked as media manager at AgForce, before following my heart to South Australia. I worked as communications advisor at CSIRO in Adelaide then moved to our farm, where I returned to my origins as a journalist, writing for the grains and red meat industries. My career has always focused on telling the stories of innovative producers, just from different angles of the industry.

I love that every day is different, and how it has opened doors to meet people from around the world. Agriculture is also such an authentic industry and I appreciate how I can live and work in the same industry. As a producer myself, I love talking to other producers from around their country and learning about their innovative farming practices.

Can you name a few highlights you’ve experienced throughout your career?

In 2014 I was awarded the International Federation of Agricultural Journalists Alltech Young Leader in Agricultural Journalism Award which included a trip to Scotland. Even though Scottish farms are very different (and they served whisky at nearly every meal) it opened my eyes to how producers around the world face similar challenges, especially the need to connect with the wider community. As a communicator, it’s been a privilege to play a small part in sharing the stories of producers so more people can understand how food and fibre is produced innovatively and sustainably.

Do you have any advice for newcomers to the red meat industry?

Don’t underestimate the opportunities the red meat industry can offer, regardless of where you begin. I have a Bachelor of Journalism and a Master of Agribusiness but have worked across all sectors of the red meat industry, including media, advocacy, science and on-farm. 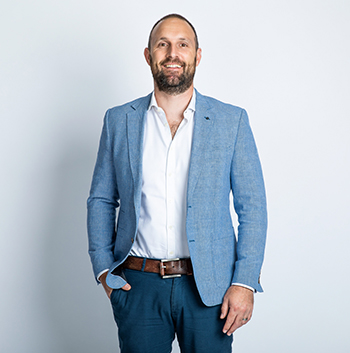 I’m a jack of all trades – I run a vertically beef business which includes cattle farms, a wholesale butchery supplying supermarkets with branded dry aged beef, and a two A Hereford Beefstouw steakhouse restaurants in Adelaide and Melbourne. I also try to be an advocate for the Australian red meat industry, as I think it’s essential that we tell people the amazing stories of Australian producers and continue to educate people as to where their food comes from.

What’s the story about the red meat and livestock industry that you want to share?

There’s a push from certain parts of society to paint red meat producers and eaters as ‘ruining the planet’, which is just not true. I want to help dispel a lot of those myths. That’s my main motivation for my advocacy work – it isn’t around promoting myself or my business. I just feel there’s a really good story that needs to be told by the Australian red meat industry to consumers who are keen to learn more about where their food comes from.

How do you do this?

Through social media – my businesses use websites, Facebook and Instagram, but I use LinkedIn for my advocacy work to show people what I do and share knowledge about the food chain. I’m also involved in MLA’s virtual classroom program where we conduct interactive school workshops. I put on my Akubra and ‘Farmer Tim’ talks to school kids about my work to try to give them more of an understanding of day-to-day operations on-farm in a fun and educational way.

What have you learned along the way while doing this work?

People are super interested in learning more about what farmers do and there seems to be a natural appreciation for producers and their work, which does make it easier to get engagement. Most people are very open and accepting of the information you provide but remember, you’re never going to please everyone. You have to try not to get too invested in negative comments or with people who fundamentally disagree with red meat production and consumption. My personal approach is to not engage with the users who can’t participate in meaningful, intelligent discussion. It’s about getting people in the middle ground onto Team Red Meat.

What’s your advice for others who want to spread positivity around the Australian red meat industry?

The more red meat producers we have promoting the industry, the better. Some of the myths about red meat production only started to become perceived ‘facts’ because no-one contested them. Make sure you can back up what you say with credible information. Publications from MLA such as Red Meat, Green Facts are a great resource. It’s also important to remain open‑minded – you’re asking people who may be starting from a position of not agreeing with you to be open-minded, so you need to show them the same respect.