Never say never: a feedlot in the tropics 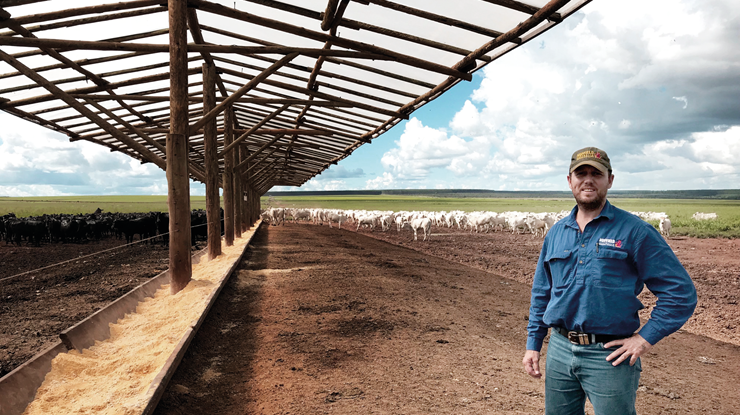 Building a feedlot in Queensland’s tropical north isn’t a challenge for the fainthearted.

It may sound ambitious, but Stewart is using lessons learned from his MLA‑sponsored 2018 Nuffield Scholarship to make it a reality. His goal is to build a more profitable business structure that:

Stewart, who runs a commercial and seedstock Brahman herd at Sarina with his wife Sarah and their young family, is prepared to try new things.

In recent years, the Borgs have shifted their business model from producing feeder cattle (350–400kg) to supplying the more lucrative live export market (500kg plus) as well as feeding for 100 days to grade MSA.

“With the growth in protein demand from China and Vietnam, ramped up by pork shortages caused by African swine fever – and we haven’t seen anywhere near the full impacts of that yet – I think finishing cattle for export is our most profitable option,” he said.

As well as backgrounding 1,000 steers on corn and sugar cane silage, the Borgs currently use permanent pens at several feedlots to custom‑feed their own cattle.

However, they see the opportunity to capture more value by finishing cattle themselves and plan to have their own feedlot operational by next year.

“We’ve got 810ha of farming country so we’re confident we can supply most of the feed inputs required to run a 2,000‑head feedlot with a 7,000‑head annual turnover,” he said.

“We’ll be able to supply a portion of the cattle from our Brahman‑based commercial herd and we will buy in or contract‑feed the rest.”

Stewart’s Nuffield experience, during which he visited farms and feedlots in The Netherlands, Ireland, California, Mexico, Brazil and New Zealand, and met with policy makers in Washington DC, has influenced his feedlot design and future operations.

“It was an incredible opportunity, the US in particular,” he said.

“After touring their feedlots, I’m convinced corn is the ration of choice. We’ve got the ideal climate to grow it and steam‑flaked corn is the most productive feed ration for its higher energy value and better feed conversion.

“Learning more about high‑moisture corns and other storage options was a real eye‑opener.”

Stewart said, while the ration choice is clear, steam‑flaking corn in Australia is expensive.

“Our operating costs are so much higher than in the US, where liquid petroleum gas (which supplies the energy for steam‑flaking) costs about 20% of what it costs in Australia.

“Our infrastructure costs far more as well,” he said.

Stewart has crunched the numbers and estimates he would need to feed 10,000 head/day to achieve the economies of scale required to justify the cost of steam‑flaking corn.

“We can’t do that, so we’ve had to look at ways of reducing our energy costs instead,” he said.

The answer has been renewable energy.

Central to the Borgs’ feedlot is a 288m x 32m open‑sided shed with a raised, ridge‑ capped roof which not only provides stock with protection from the elements but also hosts more than one hectare of solar panels that will feed power back into the grid.

While Stewart’s intention is to eventually steam‑flake corn using solar power, he’s also keeping an eye on new technology such as infra‑red if it proves to be a more economical alternative.

When the feedlot is operating at full capacity, the cattle will work their way through about 7,000 tonnes of grain a year, or about 20 tonnes/day. 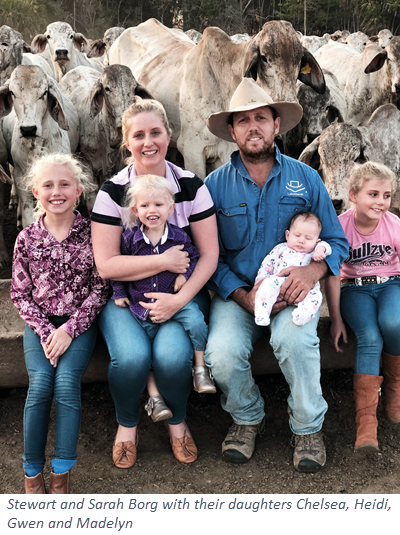 The feedlot will also provide a risk management strategy to weather the north’s highly variable seasons.

In 2017, during Cyclone Debbie, the Borgs received 1,500mm in a single day – leaving two‑thirds of their property submerged and resulting in some stock losses.

“The feedlot, which is built to withstand cyclonic conditions and is well above historic flood levels, will protect cattle from exposure during rain events and periods of high heat and humidity,” Stewart said.

When he visited cattle enterprises in Brazil, Stewart was impressed with the performance of Mulato II, a tropical hybrid Brachiaria species which he now grows for Heritage Seeds.

“It’s the highest‑protein grass in Australia; even after seed production and being cut for hay, it ranges from 14.5 to 21%, depending on the stage of growth,” he said.

“It’s very summer‑dominant and requires a lot of water, but we’ve managed to finish cull cows on it within a month.”