Due to COVID-19 restrictions, MLA made the decision to hold the AGM virtually for the first time.

The formal proceedings of the AGM included consideration of MLA’s accounts, the election of three Directors to the Board and three producer representatives to the Board Selection Committee.

MLA members voted to re-elect three Directors to the MLA Board (see extended biographies below):

The MLA Board is a skills-based Board. Directors have complementary skills in order to make important decisions for the long term benefit of the red meat and livestock industry.

The role of the Selection Committee is to call for applications, review, interview and then report to members on the suitability of candidates for election to the MLA Board.

MLA Chair Alan Beckett provided the AGM with an overview of the industry over the last 12 months – a period of significant challenge and disruption.

“As we reflect on the last 12 months, COVID-19 and its impact on all industries hangs large, but the Australian red meat sector has fared well through this pandemic,” Mr Beckett said.

“Most importantly, we saw the demand for red meat remain strong – both domestically and globally – despite the changes to consumption patterns.

“A key focus for MLA this year has been to ensure we are able to respond and adapt to the significant challenges of 2020 and our new operating environment – while continuing to deliver on our strategic objectives across our marketing, research and development investments on behalf of our industry.”

“Australian red meat is highly regarded around the world - our reputation for delivering on eating quality, traceability, sustainability, food safety and taste is second to none, and can only serve to strengthen our outlook further.

“With a forecast protein shortage across the globe driven by African Swine Fever and demand set to grow at unparalleled levels as consumers become increasingly affluent, we are looking at a three to five-year window of untold prosperity.

“As an industry our biggest challenge is how the red meat and livestock industry can be more united in seizing the opportunity this unprecedented global demand for protein provides.”

Mr Strong said as a sophisticated and forward-thinking industry, we are more than ever attuned to the needs of consumers and sharing our story has never been more important.

“MLA will continue to protect and promote your credentials as red meat producers and proud custodians of our land and livestock, but we will do so with maturity and perspective, backed up by facts and insights,” Mr Strong said.

“Our consumers want natural and nutritious food - and care more than ever about how it’s produced. Our reputation in this regard in unrivalled and we should be confident in sharing our collective story.”

Biographies of elected MLA Board Directors: 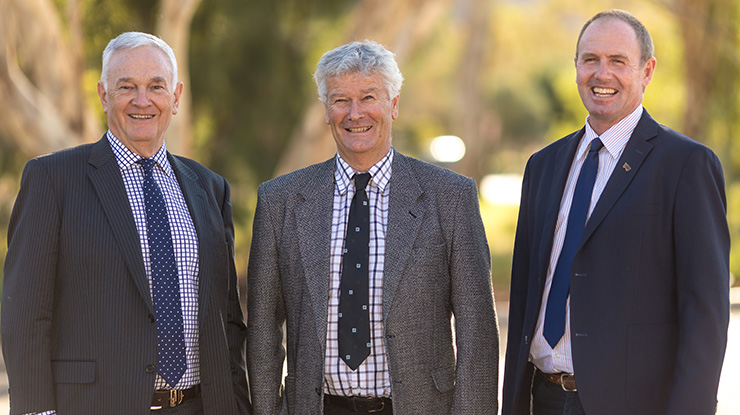 Mr Beckett runs an Angus breeding and backgrounding operation in Yea, Victoria. He brings 40 years’ experience with a major professional services firm, practising in the area of audit and corporate services to large companies with an emphasis on listed public companies along with practical experience in doing business in Oceania, South-East Asia, China, Japan and India. Mr Beckett is Chair of Defence Health Limited, a non-executive director of Westbourne Capital Pty Ltd and Westbourne Credit Management Limited. Mr Beckett is the Chair of Meat & Livestock Australia Limited, and a non-executive director of MLA Donor Company Limited and Integrity Systems Company Limited.

Mr Michael is a fourth-generation producer, working his 1,500ha family farm at Snowtown, SA, as well as grazing land in the state’s north-east pastoral area and in the south-east. Over the last 45 years he has built and operated a large-scale sheepmeat and wool business including both terminal and maternal sheep. He has extensive experience in the use of breeding technologies in both the sheep and cattle industries and, for over 35 years, has incorporated all the latest leading-edge animal breeding technologies available. Mr Michael is a great supporter and user of all sheep industry groups, including Sheep CRC, Sheep Genetics, Information Nucleus Flock and many more. Using these technologies and working with industry groups has assisted him to develop a highly productive business, breeding top performing sheep for quality red meat production, along with high value skins and wools on animals that do not require mulesing. For many years he has had a close association with commercial producers all round Australia, New Zealand and South America, holding presentation and educational field days and helping their marketing and genetic selection programs. Mr Michael is a director of Meat & Livestock Australia Limited, Integrity Systems Company Limited and a member of the Audit, Finance & Risk Committee.

Mr Lethbridge, with his family, runs Werrington Cattle Company, a commercial beef cattle, breeding, growing and fattening enterprise. Werrington has been in the Lethbridge family for 124 years with the current branch of the family in ownership since 1980. The Werrington business runs over 13,000 head of cattle and comprises a breeding program on 120,000ha of natural eucalypt forest country, approximately 250km west of Townsville and 200km north of Hughenden in north Queensland. The business also consists of Rainmore Station, a 27,000ha property near Alpha in central Queensland. Mr Lethbridge has a deep understanding of cattle production systems, managing breeder and feeder cattle under extreme environmental conditions and pasture nutrition levels, utilising genetic selection and strategic herd management to achieve production and business success. Mr Lethbridge is a director of Meat & Livestock Australia Limited, Integrity Systems Company Limited and a member of the Audit, Finance & Risk Committee.

Mr Lethbridge was Chair of the Hann Highway Action Group, a member of the Rural Fire Board and a member of the Oak Race Club Committee. He was an elected representative of AgForce for seven years, beginning as Regional Vice President for the north region, then as Regional President and Board Member and member of AgForce Finance Audit and Risk and Agribusiness Finance Drought and Climate Policy Committees. He was a member of the steering committee for the Northern Gulf Resource Management Group to develop and promote a business improvement package for north Australian cattlemen.

Mr Radel is a graduate of Emerald Agricultural College and has been operating as a commercial cattle producer in southwest Queensland for over 25 years. He is a keen community volunteer, serving as an AgForce Cattle Board Director since 2016 and more recently as an MMAT Cattle Council Australia Committee Member. Mr Radel is keen to join the MLA Selection Committee this year to provide advocacy for the beef industry decision making process, ensuring representation is achieved for grassroots producers.

Mr Wootton is the Principal/Manager of Jigsaw Farms, a high input carbon neutral operation in south-west Victoria, running 20,000 Merino ewes joined to Merino and terminal sires and 700 breeding cows. He is currently a member of the Sheep Sustainability Framework, the Victorian Farmers Federation and Chair of the Victorian Independent Advisory Panel for Agricultural Energy Investment Plan. Mr Wootton is keen to help ensure that MLA is governed by the best directors available in order to help producers to capitalise on the opportunities that are present and emerging for industry.

Mr Fitzgerald graduated Emerald Agricultural College in Animal Husbandry and Engineering and has Diplomas in Agriculture and Business Management. He has been a Director of the Australian Lot Feeders’ Association for the last nine years, serving the last five terms as Vice President. Currently, Mr Fitzgerald is General Manager and Director of Whyalla Beef Pty Ltd, a facility producing over 100,000 head of grainfed beef cattle per year. Mr Fitzgerald is a strong supporter of the Selection Committee and what it achieves for the members. If re-elected, Mr Fitzgerald will continue to give voice on behalf of grainfed producers, ensuring the best possible candidates are recommended for approval at the AGM.