Three producers from across Australia – Ricky Luhrs, Philip Gough and Andrew Carruthers – respond to some common myths about breeding values.

Before breeding values came along, producers had no choice but to pick sires purely on the basis of visual appraisal and gut instinct. The art of judging ‘a good sire’ was generationally passed on with an emphasis on staying true to tradition.

Today, with scientific advances in genetics and genomics, producers can ‘see under the hood’ and select sires that fit the bill phenotypically, but also deliver profit‑driving traits such as growth, fertility and calving and lambing ease.

Here’s how some of Australia’s leading commercial producers respond to commonly cited statements about genetic selection.

I’m not convinced that using breeding values will ultimately deliver me a net financial return.

“The most obvious payback is being able to control important variables. For example, birth weight is directly related to live calves, 400 and 600‑day growth figures are directly related to kilograms out the gate. Explain to me how that’s not a payback. Those are two major production gauges without taking into account fertility and calving ease.” – Andrew Carruthers, beef and prime lamb producer, NSW

I’ve been buying rams/bulls for years. I know what a good ram/bull looks like.

“Phenotypically you might, but you don’t know what’s under the hood. Estimated Breeding Values (EBVs), Australian Sheep Breeding Values (ASBVs) and genomics – all this data takes out risk and variability.” – Andrew Carruthers, beef and prime lamb producer, NSW

“What a good ram looks like is completely different to how he breeds. For example, it’s impossible to know how his daughters milk, or how the birth weights of his progeny compare to the next ram. Personally, over the years, we’ve made huge gains in lambing percentage to ewes joined. Without a selection program such as LAMBPLAN, that would be impossible on such a lowly heritable trait. Rams that I like are the ones that make the most money for the least amount of work, and LAMBPLAN identifies these for me.” – Philip Gough, prime lamb producer, Victoria

“That’s good. ASBVs are just another tool in the kit. You still need to know what a good ram is on the outside but do you know how he’ll perform on the inside and what (traits) he will pass on to his lambs?” – Ricky Luhrs, Merino sheep producer, Victoria

“We’re absolutely certain this selection system works and, given that we operate in a sector where often we have little control over outcomes, it’s important to capitalise on the areas that we can control. My recommendation to producers that currently don’t understand, and who want to get the best genetics affordable to them, is to educate themselves, find someone who is familiar with the information or follow industry guides.” – Philip Gough, prime lamb producer, Victoria

Most studs don’t sell sires that have breeding values and they tell me it’s just for academics who don’t know cattle.

“It’s my belief that seedstock producers who haven’t adopted ASBVs to date have a limited time left in the industry. As with the dairy, southern beef, pig and poultry industries, the big players all come from a common standpoint of implementing and using objective measurement.” – Philip Gough, prime lamb producer, Victoria

There’s no value in genetics; or it takes too long to see a return. 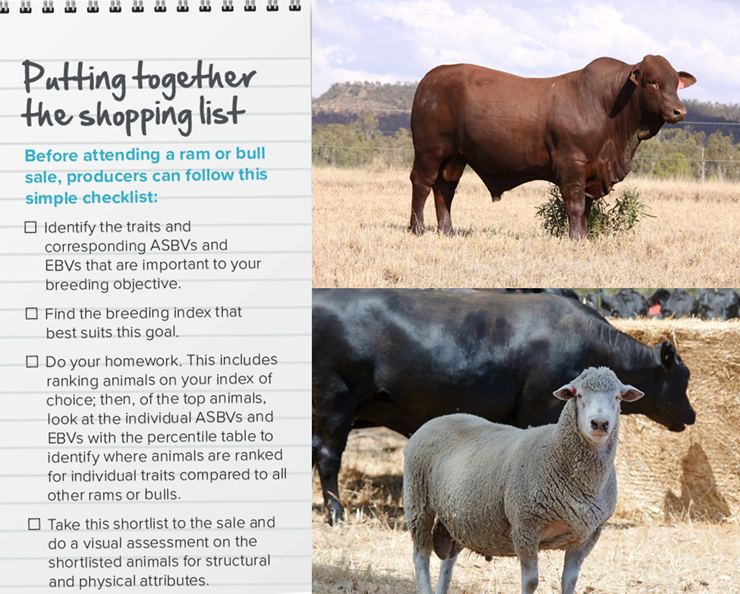 MLA’s genetics hub contains videos on how to shop for a high-performing sire.

Visit genetics.mla.com.au, choose your livestock type then scroll to ‘How do I get started with genetics’.