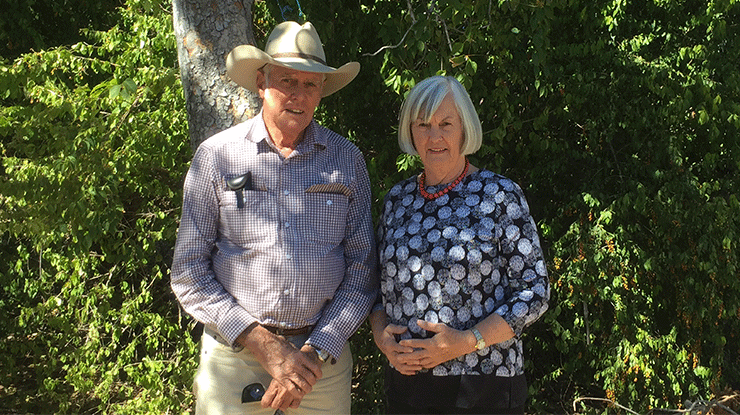 Patience has paid off for central Queensland beef producers Penny and Alan Wallace in their battle against the woody weed Parkinsonia.

They’ve used integrated weed management, including biological controls, to gradually knock back Parkinsonia coverage on their property by 60% over the past two decades.

Central to this strategy has been a 12-year trial of Di-Bak Parkinsonia, a bioherbicide commercially released this year with support from MLA.

Alan said while the bioherbicide works in areas and conditions where no other measure will, it’s no ‘quick fix’ – he’s only seen a real difference in the past three years.

“You have to have patience and success is hard to measure,” he said.

While Alan and Penny can’t put exact figures on how much their Parkinsonia control program has increased feed or lifted carrying capacity, they can see the positive impact.

“We know if we left it alone it would completely take over in flooded areas and we would lose a lot of value in some of our country,” Alan said.

When the Wallaces took over the property 19 years ago, there was heavy growth of Parkinsonia in the creek flats and floodplains of the brigalow and bottle tree country.

They’ve now mostly driven it back into the flooded country, using a variety of control methods, which cost up to $225/hectare.

It’s been a process of trial and error to establish an effective approach.

In non-flooded areas, the Wallaces use herbicide pellets where they have determined that there’s seed on the ground, and spray young plants immediately to get rid of anything that will spread seed.

For everywhere else, they rely on Di-Bak, the UU moth (Eueupithecia cisplatensia) (which, in the caterpillar form, eat Parkinsonia leaves and weaken the plant so it’s more susceptible to disease and control methods) and black smut fungus.

“It’s a slow process, but it’s definitely having an effect and we’ve noticed progress in recent years.

“There hasn’t been a flood on the flats recently so we think that may also have helped.”

While Alan believes it’s unlikely Parkinsonia will ever been eradicated from his flood country, he credits this integrated management with keeping the losses to a minimum.