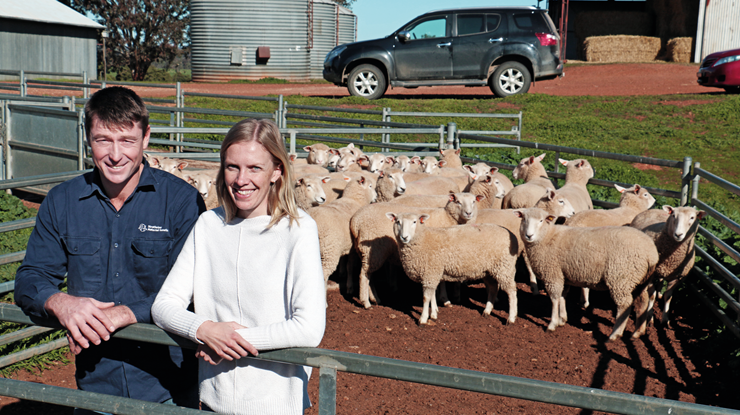 NSW producers Tim and Bek Lubke’s focus on early puberty, triplet‑bearing ewes and lamb survival has resulted in many of their maternal composite ewes weaning 100kg of lamb in 100 days.

The Lubkes, who operate Strathview Maternal Genetics at Henty, are participating in a trial as part of an MLA project led by Murdoch University to evaluate best management practices for triplet‑bearing ewes and lamb survival.

Their goal is to produce ewes which wean their lambs above their body weight at 100 days.

Analysing four years of their own triplet lambing data has shown the Lubkes that slightly lowering the condition score before ewes give birth, supplementary feeding and increased birth weights all contribute to higher survival rates in triplets.

“Some Strathview triplet‑bearing ewes have the ability to wean more than 100kg of lamb at 100 days, making them the most profitable sheep on the farm,” Tim said.

“Our focus is not to have all our sheep bear triplets, but there is ground to be made up in terms of lamb survival.

In 2018, 18% of the flock were scanned in lamb to triplets. Ewes had an average body condition score of 3.8 at joining and recorded a scanning percentage of 198% and weaning of 176%.

“We sowed sudangrass on summer rain and the ewes were able to put on a lot of condition,” Tim said.

“The next year we went back to condition score 3 and the scanning percentage was 176%.”

Strathview ewes are joined for five weeks from mid‑February at 2% rams, for a July–August lambing.

They monitor triplet‑bearing ewes to maintain condition scores at 3–3.2 for lambing (slightly lower than the twin‑ bearing ewes) to avoid casting or ewes becoming too fat.

“We traditionally lamb the twin‑bearing ewes down at 11 ewes/ha while the triplet‑bearing ewes are given more space.”

Tim said assisted births in the triplet‑bearing ewes was higher (4.5%) than the twinning mob (0.05%).

“There’s a lot more ground we can be making up to achieve better survival rates if we know how to better manage the ewes,” he said.

“Extra monitoring before and during lambing is now standard practice for our triplet‑bearing ewes to deal with any lambing sickness that arises.”

Groups of 26 ewes aged from three to six years received either:

Condition scores were recorded before trial entry at three weeks before lambing.

The ewes were assessed again at weaning to record their condition score and lamb survival.

Tim said the best result was the ewes with high feed on offer/low grain, who had 242% lambing.

“The adjustments I’ll make in response to this trial is to reduce mob sizes back to at least 50, as we are currently running our commercial triplet‑bearing ewes at about 80 per mob.” An ewe with triplets at Strathview

The Lubkes’ target profit drivers are growth and fertility, and selection has also been focused on steadily reducing ewe body weight without losing frame.

“While the overall average growth in the stud slightly dropped – along with our ewe adult weights (from 72kg to 71kg) – on average, fertility in the flock has risen.”

The Lubkes also genetically select for positive fat and muscle to maintain production in drought conditions.

Strathview ewe lambs are joined at a critical mating weight of 45kg and selected on early puberty.

Lambs are run on lucerne until at least 35kg live weight and then finished on grain until 8–10 months of age. In recent years, the Lubkes have sold grainfed wether lambs at export weights of 30kg dressed, in the light of strong export prices over the trade market.