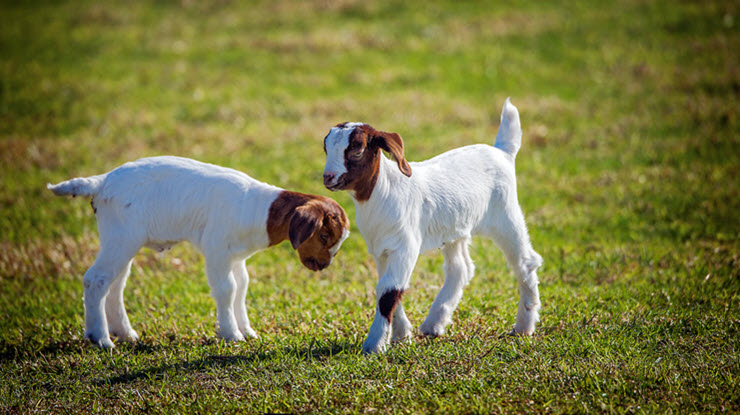 For the first time, researchers have established a baseline understanding of the prevalence, cause and cost of kid loss in the Australian goatmeat industry through a project funded by MLA.

The project involved several levels of research including:

NSW DPI Livestock Research Officer, Dr Gordon Refshauge, said the project found that at an industry scale, decreasing kid loss from 30% to 20%, at a fertility rate of 95% would increase the value of the managed goatmeat sector by approximately $786,710.

“The goat is a hardy and robust animal that needs more care than an inexperienced handler might expect, but the productivity of goatmeat herds relies on successful breeding,” Dr Refshauge said.

“Doe survival was reasonable, averaging over 95%. When compared with adults, maiden doe performance was lacking, with lower fertility and higher doe and kid mortality.

“Maiden does would most likely benefit from targeted management to adult does to maximise their reproductive potential and survival.

“Producers participating in the case studies identified predation, doe nutrition and mismothering as the largest contributors to kid loss.”

Dr Refshauge said the effect of the intense drought of 2019 was apparent in the study.

“Some producers expressed concerns that their nannies were not breeding due to the difficult conditions. The drought impacted on the herds with the lowest reproduction rates observed, where undernutrition impacted on some herds during kidding,” Dr Refshauge said.

“The reproduction rate on some farms in 2019 were insufficient to sustain self-replacement without retaining does to an older age. At the farm scale, the lowest modelled gross margin was 2.7 times lower than the higher estimates.

“The results of the field study indicate several herds had reproduction rates higher and lower than the modelled outcomes, indicating enormous potential to lift the returns of managed goat herds.”

Based on the project’s findings, researchers have made a number of recommendations to address reproductive wastage, including additional RD&A requirements.

“The key recommendation for the industry is to implement a number of well selected sentinel herds, where all animals are identified and their lifetime performance is monitored,” Dr Refshauge said.

“This will enable greater record-keeping and improve the understanding of the factors affecting goatmeat reproduction and performance.

“The sentinel farms should be supported by participatory research Producer Demonstration Sites (PDS) that undertake detailed and specific research studies.

“The PDS pathway will enable the sentinel farm to operate unencumbered by research designs, adding the value of relevance to the findings from those farms, and demonstrating the rate and value of adoption.”

The development of management packages that establish weight and condition score targets for maidens and adult does is another key recommendation.

“Further RD&A needs to closely examine sources of reproductive wastage, such as the factors affecting fertility, foetal losses and the stages at which the losses are occurring and why,” Dr Refshauge said.

“Management solutions need to be developed to improve kid survival, including quantifying the role of, and solutions to, predation.

“The producer case studies have re-emphasised the need to understand the efficacy of a wide range of drench products, and what solutions may be found via co-inhabiting ruminant species on worm burdens, as well as the role for browse and other forages.

“Future RD&A opportunities should also consider the need to validate the CSIRO developed GrazPlan sheep decision support software, GrassGro, for use with goats.”