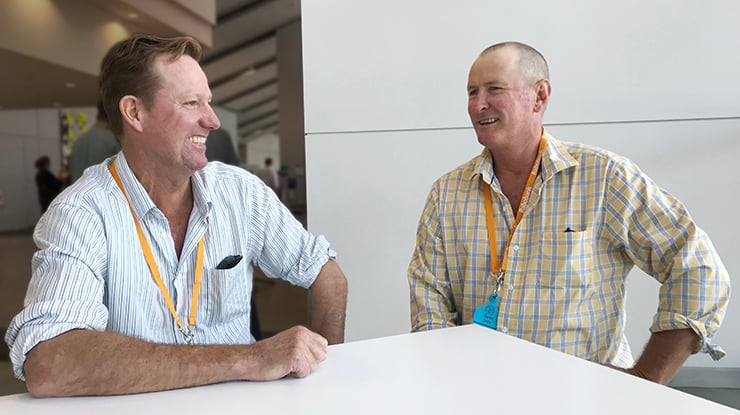 Weed control has been a long-term focus at one of the nation’s largest cattle stations, ‘Alexandria Station’, in the NT’s Barkly region.

The station was home to a Parkinsonia control trial in 2016, run by University of Queensland’s Professor Vic Galea, to test the effectiveness of a bioherbicide developed with the support of MLA.

The resulting commercialised product – Di-Bak Parkinsonia – utilises naturally occurring fungal pathogens that initiate dieback in the plant. The fungi are stored in capsules and injected into Parkinsonia plants using a specially developed delivery technology, which drills into the stems, places the capsules then plugs the hole.

Steve Drury, who manages Alexandria for the North Australian Pastoral Company (NAPCo), said Parkinsonia has always been on the station.

"It had been treated, but it was such a huge area,” Steve said.

“We have mesquite as well, but Parkinsonia is a particularly bad weed for us because it’s so invasive. We’d been getting contractors in from Katherine. We do a lot of aerial surveillance and put a GPS pin on the map for them to locate the infestations.”

Understanding how Parkinsonia spreads is one of the keys to effective control.

Parkinsonia is a riparian weed, although it can establish away from waterways. On Alexandria Station, it’s isolated around waterways and turkey nests, as well as in patches on the Playford and Rankin Rivers.

Steve is also mindful of some significant areas of Parkinsonia infestation on other areas which have potential to worsen.

Although water flows from Alexandria Station into the neighbouring property ‘Mittiebah’, it hasn’t established there.

Mittiebah manager Marty Doyle believes this is due to that station’s poorer soils, which are phosphorus-deficient, self-mulching cracking clays running into rocky spinifex country and hard limestone.

Alexandria Station also has black self-mulching cracking clays, but unlike Mittiebah, it has good phosphorus levels.

Outstation’. As is typical for Parkinsonia, the infestation was located around a dam and its immediate catchment area, where cattle travel and congregate.

The study, which began in August 2016, covered two areas of an estimated 40,000 dense and healthy Parkinsonia trees which were free of dieback.

Steve said the effectiveness of the bioherbicide was deceptive at first as he didn’t notice the herbicide was working.

“I was actually tempted to get in and poison it, because it didn’t seem to be working quickly enough – but I knew I had to trust the process.”

A couple of years on and Steve needed no convincing.

“The bioherbicides have tidied up the problem for us. You only need to treat every few plants, and it’s got the problem licked.

The work of Vic and his team means all that remains on the station are some scattered plants.

“If we found another dense area we’d certainly use [Di-Bak] again but currently the existing plants are not thick enough or established enough to warrant it.

On those remaining plants, we will just use chemical control as needed.”