Pilot research into the effect of lairage timing and duration on Australian feedlot cattle has found time of transportation, slaughter and time off feed have significant effects on carcase yield and quality.

Funded by grainfed levies through MLA and the Australian Lot Feeders’ Association (ALFA), the in-field research was conducted through a well-established supply chain involving a NSW feedlot and processing facility, and comprised 400 head of British-type cattle of a similar weight.

Two dispatch times from the feedlot were examined – the afternoon before and morning of slaughter; and two slaughter times – morning slaughter and afternoon slaughter.

They also measured muscle glycogen, rumen pH, and rumen temperature on a subset of cattle to determine the scientific reasoning behind the profound differences. 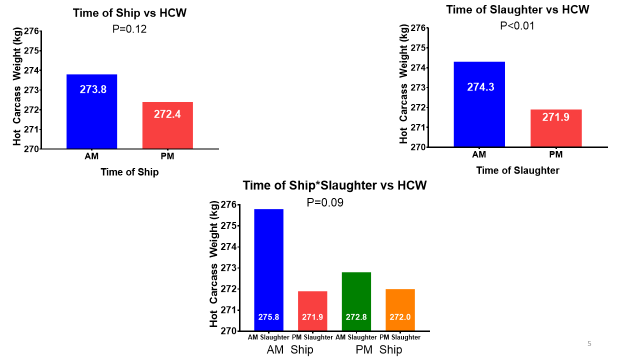 Melissa said the results highlighted that total time off feed prior to slaughter had a potent effect on both carcase yield and quality.

“Regardless of shipping time, cattle slaughtered in the afternoon had similar carcase weights.

“Cattle that are slaughtered in the morning had less carcase shrink and thus produced heavier carcases and higher dressing percentages.”

Matt said the study determined the ideal conditions to reduce the incidence of dark cutting in British-type heifers fed a high energy steam-flaked wheat and barley finisher ration for approximately 60 days with an average hot carcase weight of 225 to 325kg.

“Our competitors in the United States have already taken steps to address lairage duration issues.”

“Given the pilot nature of the current project, we will expand the project to thousands of feedlot cattle to determine the value proposition to the supply chain,” Dr McMeniman said.

“Effluent discharge will be captured in tanks on trucks and measured; animal welfare and food safety at the plant quantified, in addition to quantifying the impact of short duration lairage on carcase characteristics. We have the opportunity to capture at least an additional $14 to $24 per head, perhaps much more.

“Effluent capture from truck tanks is a particular area of interest. Feasibility of utilising truck effluent as fuel for centralised biomethane facilities in major processing and lot feeding areas could also investigated.”

The final report for this project is available here.