Australian red meat exports were the second highest financial year on record (highest sheepmeat and fourth highest beef) in 2018-19, thanks to strong global demand, an Australian dollar trading near a ten-year low and drought in key regions elevating sheep and cattle slaughter. However, while demand remains robust, an eventual turnaround in seasonal conditions will result in a sharp contraction in beef and sheepmeat supplies, slowing down exports.

In 2018-19, Australian beef exports increased 7% year-on-year, while lamb and mutton expanded 2% and 17% respectively. Goatmeat exports, in contrast, contracted 27% to an 11-year low, amid challenging supply conditions. 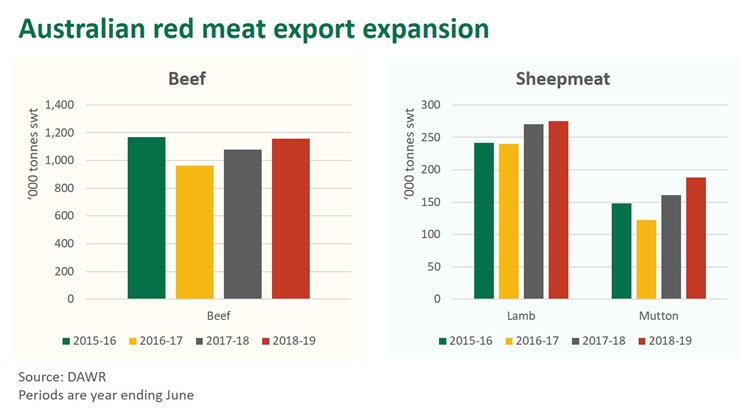 While the drivers vary, Australia has not been alone in this beef export expansion. Most noticeably, there has been a profound shift in global beef shipments to Asia, particularly China, in the last two years. A range of forces are driving this beef trade expansion, including growing supply bases, market access changes, currency movements, a strong global economy, shifting diets in Asia and, more recently, the onset of African Swine Fever (ASF) in China. In fact, there has never been so much beef being traded on the global market, in total tonnes and as a portion of product produced.

As highlighted below, on a twelve-month rolling basis, the top-10 largest exporters sold 6.74 million tonnes swt of beef onto the global market over the last twelve months – an extra 400,000 tonnes swt, or 6%, compared to a year earlier and 840,000 tonnes swt compared to two years ago. Furthermore, of the top-10 largest exporters, only India and Paraguay recorded a contraction in beef exports over the most recent twelve months of available data. Argentina led export growth (up 64% year-on-year) amid a collapse in the local currency and a relaxation of export controls, while the US (up 5%), Brazil (up 15%), Canada (up 12%), New Zealand (up 8%), Uruguay (up 2%) and the EU (up 1%) all joined Australia in an export expansion. Reflecting this growth, the USDA have estimated a record 17.3% of global beef production will be traded internationally in 2019, up from 13.2% in 2010. 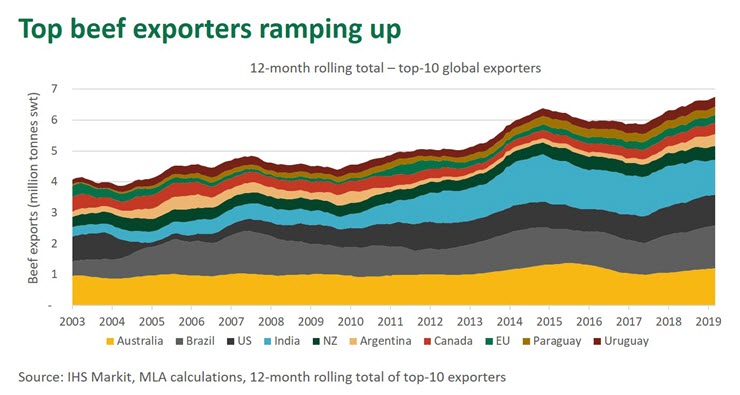 While strong demand has driven much of this export shift, the expansion also reflects an intensification of competition in global beef markets over the last twenty-four months. With production in the US still growing, there is significantly more competitive pressure in Australia’s high value markets of Japan and Korea – while Australia is still seen as the more trusted source of beef, US export tonnage to both markets is now comparable to pre-BSE levels.

At a time when Australian supply of quality beef has been hampered by drought, the US, with a massive supply base, has been able to ship large lines of grainfed cuts into Japan and Korea and compete strongly in certain channels against Australia’s more diversified offering. Despite this, Australia’s value share in both imported beef markets (47% in Japan and 38% in Korea in the first five months of 2019) remains above any period prior to the US being banned from both markets (in 2003, Australia’s value share was 44% in Japan and 16% in Korea), indicating strong demand and loyalty towards Australian beef.

Meanwhile, overcoming animal disease and food safety barriers to entry, the major South American exporters have pivoted away from traditional markets, such as Russia and the Middle East, and towards Asia, namely China, in the last five-years. 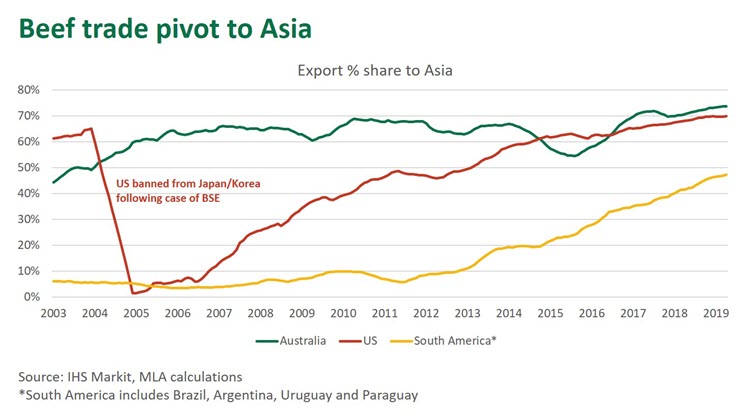 Fortunately, the growing presence of South American beef in China has not hampered Australian exports, given the sheer depth and breadth of the swelling market and its apparent insatiable appetite for protein (add to that, lower priced product has been further supported by the advent of ASF in the market). In fact, Australian beef exports to China expanded a staggering 55% in 2018-19, with growth recorded across high and low value cuts.

Sheepmeat shipments strengthen but not sustainable

Australian sheepmeat exports had their strongest financial year on record, with lamb shipments (275,000 tonnes swt) hitting an unprecedented volume and mutton (188,000 tonnes swt) rising to levels not seen since the wool crash three decades ago. However, ongoing and widespread drought and elevated slaughter was the primary driver of increased shipments and now attention is turning to the damage incurred upon the national flock. As highlighted in the recent Sheep Industry Projections June Update, a reduced number of ewes joined is expected to hinder the 2019 spring lamb crop. While some parts of South Australia and Victoria have had some decent winter rainfall, many regions are still awaiting a decent seasonal break – the failure of which will slow down the finishing of lambs.

The supply crunch appears to now be hitting. Weekly lamb and sheep slaughter tracked below year-ago levels in June and lamb and mutton exports finished the month 20% and 17% lower year-on-year respectively. With supply expected to remain tight throughout winter and into early spring, lamb and mutton prices have gone through the roof. On 16 June, the national trade lamb indicator was sitting at a record 931¢/kg cwt, up 191¢/kg cwt on where it was tracking twelve months ago.

New Zealand, the only other major supplier to global markets, has been unable to offer any supply respite as it now enters its own seasonal trough (generally from June to November and bottoming out in September) and its prices have also rallied in recent weeks.