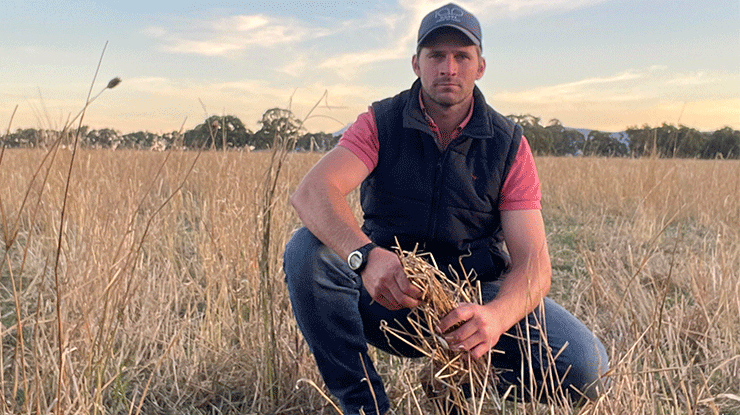 When Lachie took over ‘Mokepilly South’ at Lake Fyans in 2012, he faced the challenge of growing sufficient dry matter over winter in paddocks which had been overgrazed and under-fertilised.

He originally added annuals into the mix as an experiment to see if he could produce more bulk, better quality feed, increase livestock weights and protect his perennials through the mid to late winter period. To his delight, annuals ticked all the boxes.

“I knew if I could get some higher-producing annuals into the system, then not only could I address the initial challenges I’d seen with the place, but I could also let these annuals compete with less desirable annuals like silver grass for a more productive enterprise,” Lachie said.

For the PDS at Mokepilly South, annual ryegrass varieties were sown over three seasons from 2017 to 2019, using both a conventional rate (16kg/ha) and a double rate (32kg/ha). Applications included monoammonium phosphate (MAP) fertiliser, urea and nitrogen.

The PDS demonstrated that large increases in dry matter (DM) production were possible, with a 154% increase in DM recorded in August 2017 in the pastures seeded at the higher rate.

In 2019, the PDS produced an increase of 1,060kg DM/ha for the higher seed rate with applied nitrogen, compared with the conventional seed rate without nitrogen.

When the numbers were crunched, higher seeding rate returned a gross margin of $21/ha more than the lower seeding rate, due to the higher stocking rate it could support.

Although there was an extra cost associated with double sowing, it did give us more dry matter to play with at a time when we’ve had a feed gap in the past,” Lachie said.

The PDS also reﬂected the beneﬁts associated with early sowing ahead of the autumn break, which in the region typically arrives around ANZAC Day.

Due to unforeseen circumstances Lachie was unable to sow until May in one of the PDS years – the result was decreased DM production and reduced ﬂexibility in pasture utilisation.

Lachie has seen a beneﬁt to stock and perennial pasture turn-off from the PDS.

“We’re able to turn lambs off on the annuals faster compared with other feed during that period,” Lachie said.

It’s also given us a chance to give the perennials a rest over the winter period when they typically don’t grow well and respond poorly to grazing – now they’re performing really well come spring and summer.

“Ultimately, a well-managed perennial system is where I’d like to go with my pastures, and having the annuals is allowing me to better pursue this.”

The annuals have also provided a risk-management strategy, giving the ﬂock access to feed at critical times. This is important as the enterprise has moved away from prime lambs toward trading lambs – a tactic to better match the property’s carrying capacity and manage risks.

“You need to have relief valves in your system and introducing the annual ryegrasses is one of mine, as I can better match pasture production and stocking rates.”

Visit the MLA persistent pastures hub to learn more about selecting the right pastures for your system, sowing in the right place at the right time and managing for the seasons.