Smart tracker on the move 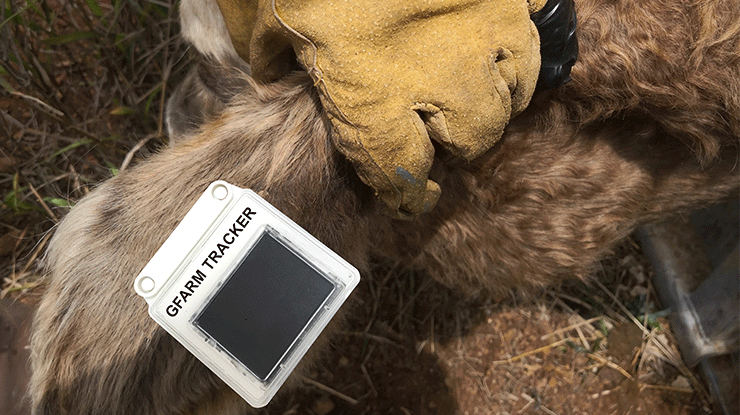 This follows a lengthy development period and trials, including teaming up with MLA and Carwoola Pastoral Company near Bungendore, NSW, on the “smart farm” project. Designed to showcase a range of ag-tech innovations and connectivity options, the project involved dozens of providers demonstrating the capability of their designs.

IDS installed trackers on 120 animals at one Carwoola property and has recently installed another 220 on a separate property to gain further insight into the market capability of the technology.

“We could quickly tell which parts of a paddock weren’t being utilised and could then look at water locations, pasture quality and other reasons,” he said.

“Another major benefit was in mustering – seeing immediately what animals have been missed allows for big cost savings.”

How does it work?

The technology operates by placing a tag in the animal’s ear which records real-time movements and ambient temperature. This allows the producer to both track the current GPS fix of their animal or mobs and gather much more crucial data about individual and group animal health and behaviour.

It works in conjunction with the National Livestock Identification System to allow the animal to be pinpointed via drone scanning or GPS fixes every hour through LoRa communications.

“This means remote assessment of the animal’s health and status is possible and treatments can then be administered without having to shift an entire mob,” Pieter said.

MLA General Manager Research, Development and Innovation, Sean Starling, said although this technology is in its infancy, it’s evolving quickly with each new iteration being evaluated by MLA.

“We believe it’s only a matter of a few years before the technology has high retention rates, is  reusable – which enables the cost to be amortised across multiple host animals – and business models are in place which mean producers don’t need to purchase a tag outright,” he said.

“The analogy here is the option to never own your phone but either lease it, or pay it off over a plan. This same business model transition will occur in smart animal tags as well, and then we’ll see mass adoption of the technology.

“Once the technology has been adopted by a producer, or imposed with a premium by customer-focused value chains, not only will producers get the on-farm productivity benefits but also the value chains that they operate in will be able to demonstrate, with evidence, to consumers that livestock were neither hungry, thirsty, frightened or sick for any longer than we accept as a standard of a human being.”

The GFARM tracker is powered by a built-in solar panel and battery and built to last five years. It can alert when animals move outside farm boundaries.

“What we’ve seen in trial work is that animal security has been improved, not just by providing an understanding of if the animal broke a fence or there was theft but through a psychological impact as well,” Sean said.

“Once you start putting the information out – ‘there are GPS trackers on cattle’ – theft goes down.”

Data on ambient temperature means producers gain an understanding of trigger points at which cattle stop grazing or move to water points.

The GFARM tracker works hand-in-hand with Internet of Things (IoT) sensors such as weather stations, cameras, water management systems and other livestock management tools to simplify farming tasks while automating the recording of information and animal records.

IDS is now starting to produce large numbers of the GFARM Tracker and is in the process of launching it globally.

The GFARM tracker was one of the featured technologies at the recent Australian Agriculture Immersive Technology Conference in Melbourne. To view the full playlist of conference presentations, click here.