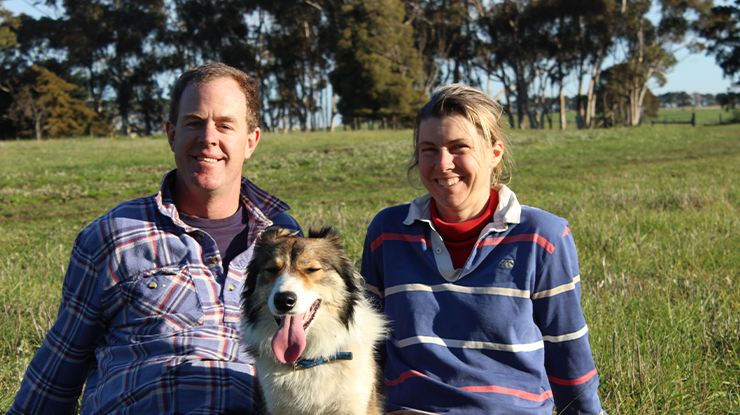 Craig and Jayne Drum, pictured with their dog Louie, are getting back to the basics of managing their feedbase.

Victorian sheep producers Craig and Jayne Drum could carry out feed budgeting in their sleep, but it hasn’t stopped them from looking for new information to drive their feedbase productivity.

Jayne was a technical officer for trials in the MLA‑supported EverGraze project for two years and Craig is an agronomist, but they reckon it’s one thing to teach and another to do.

“The problem was, we just weren’t disciplined in applying what we knew – and told others to do – in our own enterprise.”

To overcome this and provide rigour to their mixed farming enterprise, the couple are currently working their way through the Managing a Diverse Feedbase program with MLA’s Profitable Grazing Systems (PGS).

The program, which Craig helps facilitate, is delivered primarily by southern Victoria rural consultant Cam Nicholson to producers through group sessions, farm visits and one‑on‑one learning over a 12‑month period.

Participants, through skills‑based learning and practice, focus on how to better manage a mixed farming feedbase to meet their livestock production goals.

The PGS program is helping Craig and Jayne understand the supply of and demand on their feedbase in a 12‑month cycle.

The Drums are relatively new to mixed farming.

Six years ago, inspired by the productivity of nearby mixed farmers, the couple introduced Australian White and Dorper ewes to their cropping enterprise.

While these breeds were easy‑care and productive on a farm with no sheep‑handling infrastructure, their tendency to rub and damage newly erected fencing resulted in the Drums swapping them for Merino ewes.

Craig and Jayne, who are still building up numbers, currently run 200 ewes, joined to Suffolks for a first‑cross prime lamb. They opportunity trade first or second‑cross lambs.

Ewes and lambs are grazed on a mix of:

One challenge the Drums faced was the need for ewes to lamb from 1 April, to fit in with demands of activities on and off the farm.

“The ideal would be to have ewes lambing in green pastures but, while we get lots of rain, we’re in a Mediterranean‑type climate where summer rainfall is very low,” Craig said.

The PGS training helped the Drums identify this gap and understand how their pastures were performing.

They sowed fodder rape and lucerne in September to take advantage of summer storms and expect it to provide feed for pregnant ewes in February and/or March.

“I’ve learnt through measuring dry matter and developing feed budgets over and over again in this program, that I was generally overestimating how much feed was available,” Craig said.

“It’s why sheep were taking longer to reach target weights than I’d anticipated.”

The Drums believe better feedbase management is a springboard for growing their business – a theory they’re testing out by moving into trading lambs to turn events such as failed crops into opportunities.

“The PGS style of delivering learning through group sessions and one‑on‑one learning means you can really get to the bottom of your challenges and sort out what’s holding you back,” Craig said.

“For us it was just not being rigorous enough in optimising our feed supply and understanding the impact on animal growth.

“It’s a complex business when you’re growing crops and running livestock, but nowadays every paddock is a feed source at some stage and there are decisions to be made about that every day.”

“When we sat down with Cam and mapped out our pasture growth for the year and our sheep production system, it was clear what changes could be made to our system and both the expected production and financial outcomes,” she said.

“Both of us knew these fundamentals from our work and uni days but the program has reminded us to put them into practice.”

As they improve feedbase management, Craig said it will support their next challenge – lifting their lamb weaning rates.

“If we know we’re meeting ewe feed requirements better all year round, then we can work on the other factors which impact lamb numbers, such as genetics,” he said.